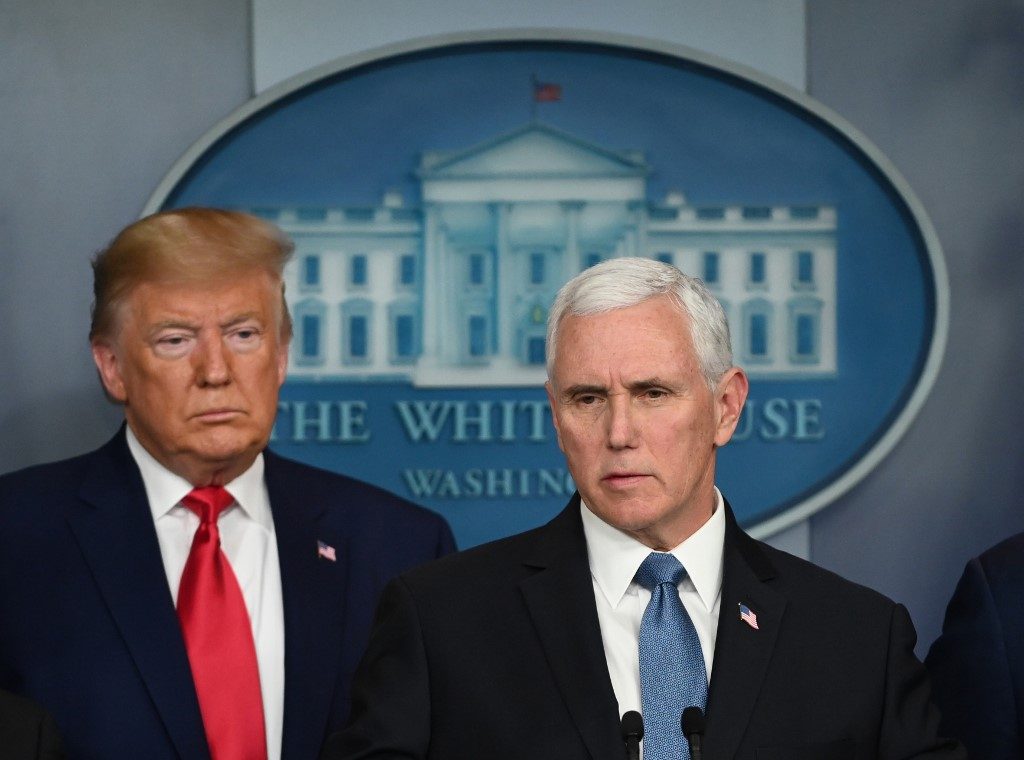 WASHINGTON, DC, USA – Vice President Mike Pence on Sunday, March 1, defended the US administration’s handling of the coronavirus epidemic after the first confirmed death on American soil and rising criticism of the state of US preparedness.

Pence and Health Secretary Alex Azar made the rounds of Sunday talk shows with the message that risks from the disease remain low for most Americans, while promising to make up for testing shortfalls.

“We could have more sad news, but the American people should know the risk to the average American remains low,” Pence said on CNN’s “State of the Union.”

The assurances came a day after officials confirmed that two men had died in the northwestern state of Washington after becoming infected with the virus.

Azar told “Fox News Sunday” the man in his 50s was in a hospital to which a nursing home, hit by a coronavirus outbreak, had sent patients.

“So right now there’s a large investigation going on in the nursing home, the hospital, contact tracing to try to determine where that disease was introduced and how it might have spread,” he said.

The United States has had at least 70 confirmed coronavirus cases in all, including 47 patients who were repatriated from virus hotspots in Asia and quarantined for 14 days on their return, according to the Centers for Disease Control and Prevention. Pence put the number of cases among repatriated Americans at 46.

More than 20 other people have been infected in the United States, including the first case in New York state confirmed on Sunday — a woman who had travelled to Iran. She was described as not being in a serious condition.

Genetic analysis suggests the novel coronavirus had probably been spreading undetected for about 6 weeks in Washington state, The New York Times reported.

The spread of the virus through communities would be an ominous development that would almost certainly intensify the epidemic in the United States.

US health authorities have been slow to distribute coronavirus testing kits, however, making the dimensions of the problem uncertain.

“It’s a very fair question, and it’s one of the first issues that governors I spoke to raised with me,” Pence said when asked on CNN why the US was so far behind other countries in producing testing kits.

He said more than 15,000 testing kits were released over the weekend, the federal Food and Drug Administration has approved a testing regime, and the government was working with a commercial provider to produce an additional 50,000 kits.

President Donald Trump put Pence in charge of the US response last week, amid rising complaints that the administration had been slow to prepare for the virus’s spread.

Trump himself had been criticized for seeming to low-ball the risk, even as experts from the federal Centers for Disease Control and Prevention warned of a looming health emergency.

Former vice president and Democratic candidate Joe Biden attacked what he described as Trump’s “incompetence” in dealing with the epidemic, accusing him of muzzling the government’s top experts.

“I see no preparedness other than political talking points,” he said on ABC’s “This Week.”

Democrats also have roundly attacked proposed Trump budget cuts for the CDC and for eliminating in 2018 a senior White House position for a director in charge of global health security.

Right-wing commentators, meanwhile, have accused Democrats of “weaponizing” the health crisis, while the president’s son Donald Trump Jr. accused them of hoping the virus “kills millions” to hurt his father.

In defending the administration’s response, Pence credited Trump with acting quickly to establish quarantines for Americans brought back from China and Japan.

“The coronavirus remains low — and that is largely owing to the decision the president made, the energetic efforts of CDC and local health officials, and we’ll continue to lean in that in a hopeful way,” the vice president said. – Rappler.com