Mar 4, 2020 8:07 AM PHT
Agence France-Presse
Facebook Twitter Copy URL
Copied
News footage shows cars piled up, hangars destroyed, and what appears to be dozens of aircraft smashed into each other 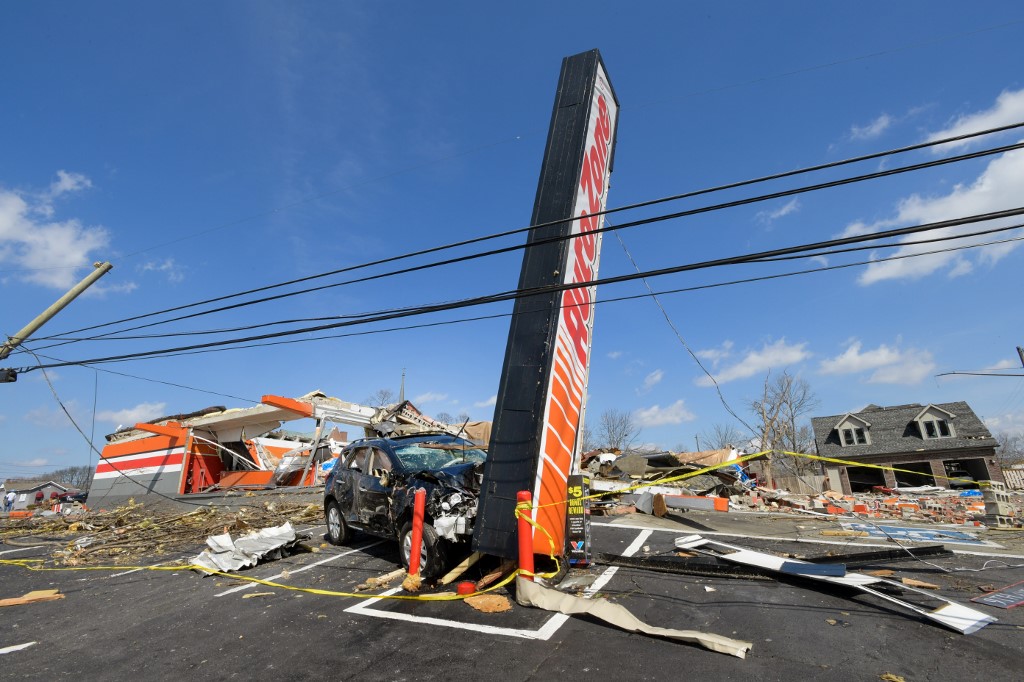 Devastation could be seen across the rubble-strewn state capital Nashville, where a tornado touched down shortly after midnight.

Residents described running for their lives as their homes came down around them, with the authorities reporting that tens of thousands were without power.

“TAKE COVER NOW! THIS IS AN EXTREMELY DANGEROUS STORM!!!” the National Weather Service tweeted as one twister tore through an area west of Nashville.

Footage broadcast by the local ABC affiliate showed cars piled up, hangars destroyed, and what appeared to be dozens of aircraft smashed into each other at Nashville’s John C. Tune Airport.

The Nashville Police Department circulated aerial photographs of many buildings missing roofs and, in at least one neighborhood, homes reduced to piles of rubble standing next to houses that escaped damage.

“In the hours ahead, we will continue deploying search and rescue teams, opening shelters across the state, and sending emergency personnel to our communities hit hardest,” Governor Bill Lee wrote on Twitter.

The Tennessee Emergency Management Agency (TEMA) said that the toll had risen to 23 across 4 counties.

Among the victims were two people in Nashville killed after being struck by debris, the police department reported.

Mayor John Cooper said around 150 people had been transported to medical facilities while some 48 buildings had collapsed in the city, which is the center of the United States’ country music scene.

US President Donald Trump said that he would visit the stricken areas Friday, March 6.

“Tornado damage has been reported throughout West and Middle Tennessee including downtown Nashville,” it added.

In the city’s East Nashville neighborhood, resident David Haskell said that he and his wife bolted into their storm shelter after an alarm on their phone went off.

“Ten seconds later the house just exploded,” he told the local Tennessean newspaper, standing in front of his home, with its crumbled walls and destroyed roof.

Mayor Cooper wrote on Twitter that “Nashville is hurting, and our community has been devastated,” as he urged people to lend a helping hand.

More than 73,000 customers were without power amid scattered storms throughout the day, TEMA reported.

Tennessee is one of 14 states voting in the crucial Super Tuesday primaries, which will help determine the Democratic Party nominee for November’s presidential election.

Cooper told a news conference that 15 polling stations had been affected by storm damage, less than 10% of the total.

The Democratic candidates vying to take on Trump in November’s election were quick to acknowledge the disaster as Tennesseans headed to the polls.

“We have been watching the news coming out of Tennessee with heavy hearts,” former New York mayor Mike Bloomberg tweeted.

Massachusetts Senator Elizabeth Warren said she was “heartsick for the victims.”

Actress Reese Witherspoon, who grew up in Nashville, tweeted that she was “saying special prayers for the families who lost loved ones.”

The storms hit exactly a year after tornadoes cut across Alabama, which lies directly south of Tennessee, killing 23. – Rappler.com