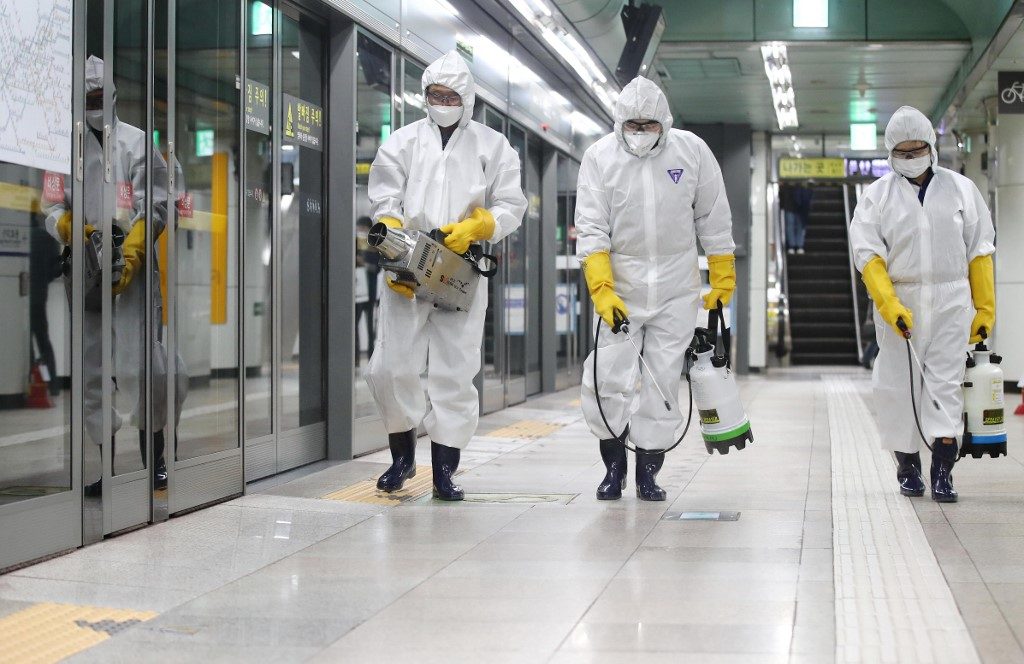 Facebook Twitter Copy URL
Copied
(UPDATED) Seoul announces 435 new cases on March 4, far below the rise of 851 on March 3 – when President Moon Jae-in declared 'war' on the virus – and its lowest increase since February 26

SEOUL, South Korea (UPDATED) – South Korea reported its lowest number of new novel coronavirus cases for a week Wednesday, March 4, as the government proposed a near-$10 billion additional budget to try to address the epidemic’s impact.

Seoul announced 435 new cases Wednesday, far below the rise of 851 on Tuesday, March 3 – when President Moon Jae-in declared “war” on the virus – and its lowest increase since February 26.

The South’s total, which is already the largest in the world outside China, reached 5,621, and the Korea Centers for Disease Control and Prevention said 4 more people had died, taking the toll to 32.

The government proposed an extra budget of 11.7 trillion won ($9.9 billion) on Wednesday to improve the country’s infectious disease prevention system and support small- and medium-size businesses.

It is part of a 30-trillion-won ($25 billion) package Moon announced Tuesday to address the “grave” situation brought on by the outbreak.

Moon cancelled his trip to the United Arab Emirates, Egypt and Turkey scheduled for later this month to focus on containing the epidemic, his office said.

Turkey is one of more than 30 countries that have issued entry bans on arrivals from South Korea in the wake of the virus outbreak.

South Korea has seen a rapid rise in infections in recent days as authorities carry out checks on more than 260,000 people associated with the Shincheonji Church of Jesus, a religious sect often condemned as a cult that is now linked to more than half the cases. (READ: South Korean sect leader apologizes over coronavirus spread)

Over 4,000 cases have now been confirmed in southern city of Daegu – where the outbreak among Shincheonji members began with a 61-year-old woman, who developed symptoms on February 10 and attended at least 4 worship services in the city.

Authorities are looking to secure places in hospitals or other care facilities for some 2,300 Daegu patients still in self-quarantine at home – some of them with severe symptoms, others with either mild ones or none at all – vice health minister Kim Gang-lip told reporters.

Scores of events in the country – from K-pop concerts to sports seasons – have been cancelled or postponed over the contagion, with school and kindergarten breaks extended by 3 weeks nationwide.

All daycare centers are also closed until Sunday, March 8, and the government is contemplating whether to keep them closed for longer.

“I urge you to refrain from all possible meetings and outings,” said KCDC director Jung Eun-kyeong. “We recommend that each institution or company actively work online or work from home.”

The central bank has warned of a contraction in the first quarter for the world’s 12th-largest economy, noting the epidemic will hit both consumption and exports. – Rappler.com