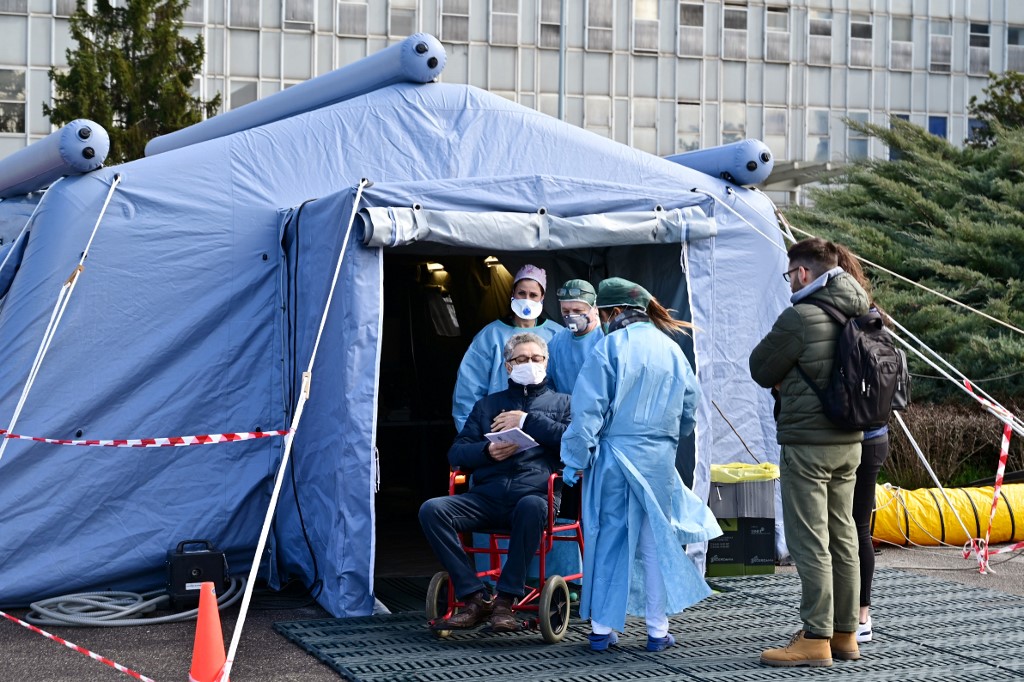 CREMONA, Italy – A blue tent packed with masked medics in nylon overalls and rubber gloves greets patients outside an Italian hospital at the European epicenter of the new coronavirus epidemic.

Welcome to the “sorting” room: an urgently deployed army-style field hospital where people running a fever or showing other flu-like symptoms are tested for signs of COVID-19.

Italy is learning fast from its mistakes.

One of them involved a single man – a 38-year-old codenamed “patient number one” – who developed pneumonia but was never isolated while he was treated in hospital, resulting in him unwittingly infecting other patients.

Italy’s 3,000 cases and 107 deaths from COVID-19 are now overwhelmingly linked to that one case from February. (READ: Italy shuts schools as global coronavirus battle intensifies)

The military-style field tent and the army of medics equipped for just about any emergency are meant to make sure the virus is not spread by another hospital again.

“If they have a high fever…breathing disorders or abnormally rapid breath of more than 20 breaths a minute, then they are immediately taken to an emergency zone,” the Cremona hospital’s chief emergencies officer Antonio Cuzzoli told AFP.

These severe cases are then walked or wheeled to a designated emergency room along a red line on the ground that makes sures they come nowhere near other patients.

Cuzzoli’s field hospital went up just as the Italian health crisis was unfolding on February 22.

The government has set up almost 350 of them to date.

Italy is now only trailing China in terms of fatalities and registering dozens of new deaths a day.

And more people have died in Cremona’s Lombardy region near Milan than have died in the rest of the Mediterranean country combined.

The town field hospital’s medics run through a checklist of patients’ health details as they step onto tent’s nylon sheet covered floor.

A green mask is immediately strapped behind their ears as the patients are carefully walked toward a table and seated by a nurse.

They stretch out a finger to get a pulse and temperature measurement and start answering basic questions.

“We have different care areas: one for COVID-19 patients, another for strokes, for heart attacks, for respiratory failure not related to COVID-19, for trauma…” he said before trailing off.

This endless work and the ever growing number of cases means everyone is feeling the strain.

“But we fight on. The system manages because the Lombardy (health) system and the Italian system are strong,” he said with note of pride.

“It is a hospital network that guarantees a response and which holds despite the difficulties.”

It is also a system that is facing an epidemic whose scale this generation of Italian doctors has never seen.

The head of a team of doctors from the Biomedical Research Institute in Milan who managed to identify the Italian strain last month said he has never seen this type of epidemic.

“In 42 years of work as an infections specialist, I have never faced something that had forced us to review our entire medical service organization scheme,” Massimo Galli told AFP.

“We are dealing with an extremely high number of intensive care beds during an absolute emergency.”

Parts of northern Italy ended up being quarantined entirely – a massive disruption unseen anywhere else in Europe and covering a string of villages home to 50,000 people.

Italy will now be hoping that the introduction of more and more tents outside hospitals such as the one in Cremona will help avoid adopting even more drastic measures down the line.

The government on Wednesday, March 4, was already forced to adopt the radical step of shutting all schools and universities until March 15.

It also took the widely-unpopular decision to force all football matches to be played without fans for a whole month to limit contagion.

Galli conceded that this was “a bitter pill to swallow” for Italians fighting an invisible and still poorly understood threat.

But he said crowd control was now “an obligation” and not a choice. – Rappler.com