Mar 8, 2020 9:09 AM PHT
Agence France-Presse
Facebook Twitter Copy URL
Copied
Once enacted, Italy will be second to China in imposing a massive lockdown in response to the coronavirus outbreak 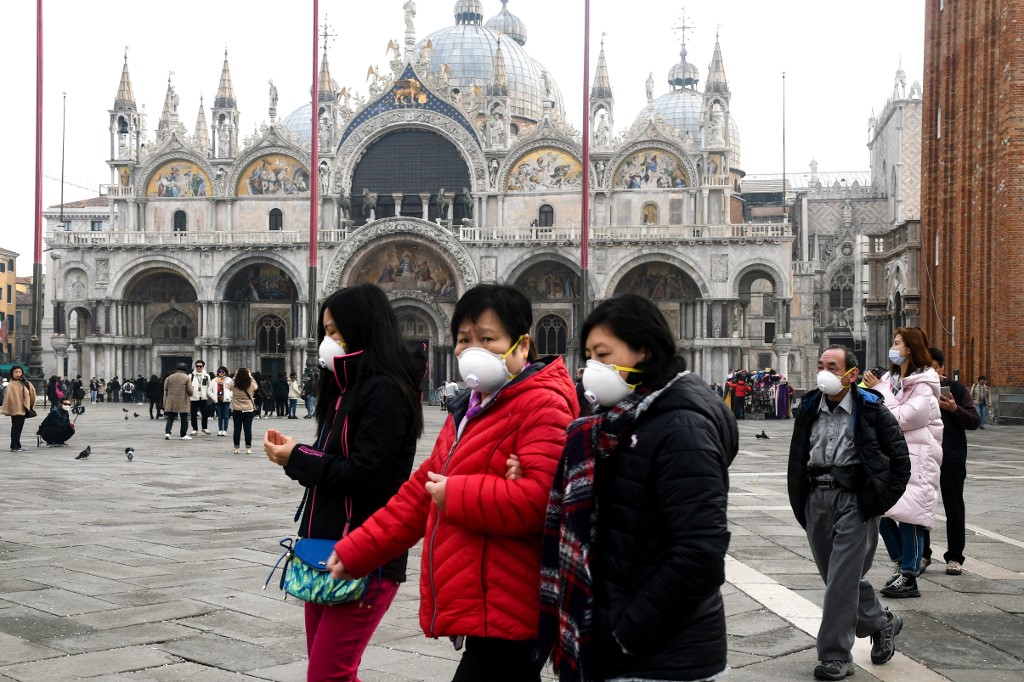 ROME, Italy – Italy’s government plans to place large parts of the north in coronavirus lockdown as Italian cases soared past 200 on Saturday, March 7, and the Vatican announced Pope Francis’s Angelus prayer would be livestreamed.

In an unprecedented move echoing China’s shutdown of its Hubei province at the start of global outbreak, a draft government plan obtained by an Italian newspaper said Italy intended to quarantine the entire Lombardy region around Milan, as well as tourist magnet Venice, Parma and Rimini, in northern Italy.

The quarantine decision was “imminent”, Corriere Della Sera reported, as the number of cases worldwide rose to over 100,000 with 3,500 dead across 95 nations and territories.

The World Health Organization (WHO) described passing the 100,000-mark as a “somber moment”.

In the United States, the governor of New York declared a state of emergency as 21 new cases were confirmed on board a cruise ship stranded off the coast of San Francisco.

Deaths continued to mount in the worst-hit countries with 36 new fatalities in Italy, 28 in China and 21 in Iran.

WHO said, however, the efforts of China and other countries were “demonstrating that spread of the virus can be slowed” with the path of the disease even “reversed through the implementation of robust containment and control activities”.

Italy recalls retired doctors
In Italy, Corriere Della Sera and other news organisations cited the draft government resolution which said movement in and out of the quarantined areas would be severely restricted until April 3.

The Angelus prayers — normally delivered by the 83-year-old pontiff from his window — would also “be broadcast via livestream by Vatican News and on screens in Saint Peter’s Square,” the Vatican said.

Italy is the worst-hit European country and its toll shot up Saturday by a single-day record of 1,247 cases to 5,883, taking the number of deaths to 233 since the outbreak began.

Retired doctors are being recruited to bolster the healthcare system with 20,000 more staff while civil protection officials say Lombardy region is having trouble finding beds in hospitals.

NY state of emergency
In the United States, Governor Andrew Cuomo of New York said 76 people had now tested positive for the virus, 10 of whom had been hospitalised.

Declaring the state of the emergency, he said the state would probably be spending $30 million a week to fight the virus.

The US is also battling to contain an outbreak on a cruise ship where 21 people have tested positive.

The Grand Princess has remained off San Francisco since Wednesday— when it was supposed to dock — after two people who had been on the ship during its previous voyage contracted the virus. One later died.

US Vice President Mike Pence said the ship would be brought to a non-commercial dock this weekend and all 3,533 passengers and crew will be tested.

The number of infections in South Korea passed 7,000 on Saturday — the highest in the world outside China.

Iran’s 21 new deaths from the novel coronavirus and 1,076 fresh cases in the past 24 hours brought the overall tolls there to 145 dead and 5,823 infected.

The number of cases recorded in France rose to 716 with 16 deaths.

President Emmanuel Macron is to meet Sunday with health advisors while two national deputies and a worker at the National Assembly have been confirmed as having contracted the virus.

In China meanwhile, the number of new cases reported Saturday nationwide was the lowest in weeks.

The government has hinted it may soon lift the quarantine imposed on Hubei province — the locked-down epicentre where some 56 million people have been effectively housebound since late January.

For the second consecutive day, there were no new cases reported in Hubei outside Wuhan, the province’s capital.

But the number of infections beyond the epicentre rose for the third straight day, fuelling fears about cases being brought into the country from overseas.

The negative impact to the economy was shown in official data Saturday, with Chinese exports plunging 17.2% in the first two months of the year.

Dozens of sports events have been cancelled, including the Scotland-France rugby match scheduled for Saturday in Glasgow.

Organisers of the Barcelona marathon on Saturday postponed the event, which had been scheduled for March 15, until October 25.

And in Canada, the International Ice Hockey Federation (IIHF) called off the Women’s World Ice Hockey Championships, which had been set to run from March 31 to April 10.

But Saudi Arabia reopened the area around the sacred Kaaba in Mecca’s Grand Mosque, Islam’s holiest site, after suspending the year-long umra pilgrimage during which worshippers circle the Kaaba seven times.

However, access to the Kaaba is blocked and the Grand Mosque is being sterilized. – Rappler.com