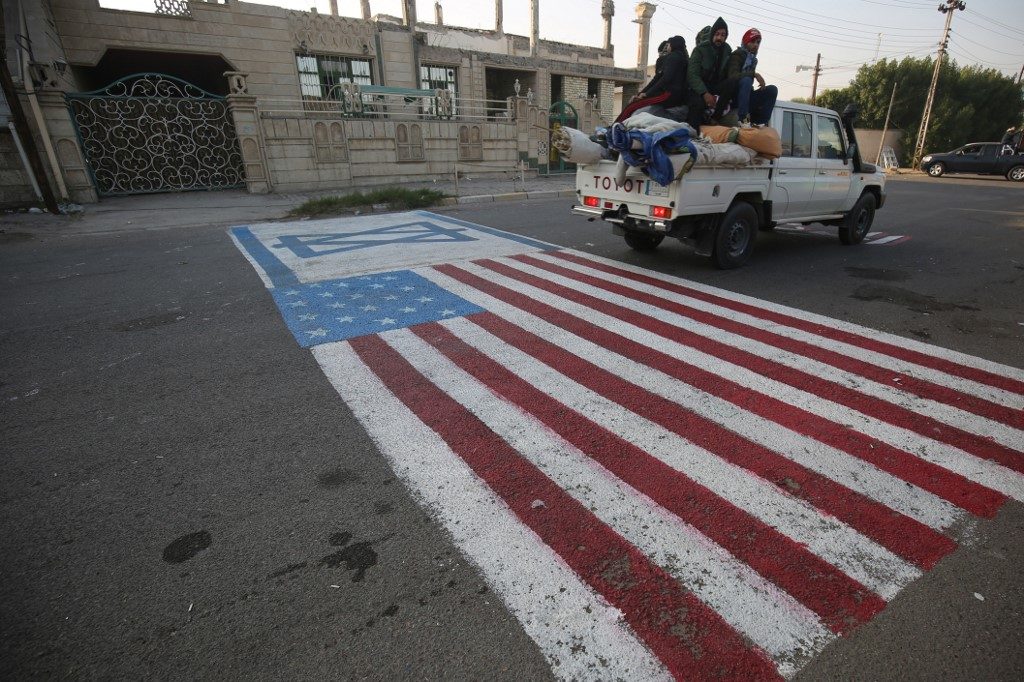 Facebook Twitter Copy URL
Copied
The strikes were 'defensive, proportional, and in direct response to the threat posed by Iranian-backed Shia militia groups who continue to attack bases,' the Pentagon says

WASHINGTON, USA – The US military launched air strikes against a pro-Iranian group in Iraq following the deaths of two Americans and a Briton in a rocket attack, US military officials told AFP on Thursday, March 12.

The operation targeted 5 weapons facilities of the Kataeb Hezbollah armed faction across Iraq, the Pentagon said in a statement.

“These weapons storage facilities include facilities that housed weapons used to target US and coalition troops,” the statement said.

The strikes were “defensive, proportional, and in direct response to the threat posed by Iranian-backed Shia militia groups who continue to attack bases” hosting troops that are part of the international coalition fighting  Islamic State jihadists.

US Secretary of Defense Mark Esper said the United States “will not tolerate attacks against our people, our interests, or our allies.”

“As we have demonstrated in recent months, we will take any action necessary to protect our forces in Iraq and the region,” he said in a statement.

Esper had earlier warned that “all options are on the table” to respond to the death of the three soldiers in a barrage of about 18 rockets on the Taji air base on Wednesday.

Troops from the United States and other countries in the Operation Inherent Resolve coalition reside at the base, and have been targets of previous rocket attacks attributed to Iran-backed Iraqi Shiite militia.

Wednesday’s attack on the Taji air base was the 22nd on US installations in Iraq, including the American embassy, since late October.

While there was no immediate claim of responsibility, Washington has blamed Iran-backed factions from the Hashed al-Shaabi network, a state-sponsored umbrella group that includes Kataeb Hezbollah, for recent similar violence.

Fourteen others were wounded in the attack Wednesday, including Americans, Brits, and Poles.

One US official told AFP that the targets on Thursday were logistics nodes and drone storage units.

“The strikes began at 1 am (2200 GMT Thursday) local time, using various kinds of aircraft,” the official said, adding that it was specifically a US operation, and not carried out by the coalition.

An Iraqi security source told AFP that 5 heavy missiles hit the Jurf al-Sakhr area south of Baghdad, which is controlled by Kataeb Hezbollah.

The explosions shook nearby homes and Iraqi military forces there were placed on alert, the Iraqi source said.

Wednesday’s rocket attack had sparked fears of a fresh escalation of tensions between the United States and Iran.

The two sides came close to war in January after a series of tit-for-tat strikes that began with the death in December of a US contractor.

Two days later, the US responded by bombing Kataeb Hezbollah, killing at least 25 of their fighters.

The group then stormed the US embassy in Baghdad, causing light damage but enraging the Trump administration.

On January 3 Washington retaliated by killing Iran’s powerful military commander Qasem Soleimani – whom the US says has orchestrated the rocket attacks – and the Hashed’s deputy chief Abu Mahdi al-Muhandis in a drone strike.

Iran then answered back with a volley of missiles at the western Iraqi base of Ain Al-Asad. While no personnel were killed in that attack, dozens of US soldiers suffered brain trauma.

The violence on Iraqi soil left Baghdad furious, and in January its parliament voted to expel all foreign soldiers from Iraq in reaction to the killing of Soleimani.

Among them are some 5,200 US forces stationed across Iraq as part of the international coalition – comprised of dozens of countries – formed in 2014 to confront the Islamic State jihadist group, which took swaths of territory that year. – Rappler.com