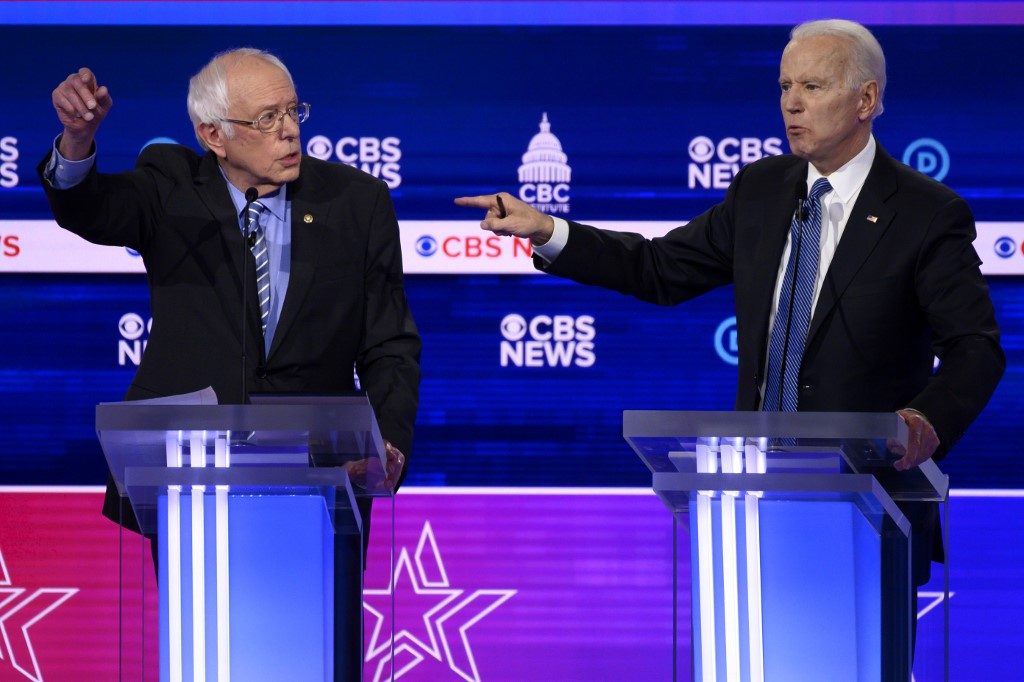 Facebook Twitter Copy URL
Copied
Public health experts have rebuked authorities for downplaying the pandemic, and lagging far behind other hard-hit countries in rolling out testing for the virus

Public health experts have rebuked authorities for downplaying the pandemic, and lagging far behind other hard-hit countries in rolling out testing for the virus.

“The administration’s failure on testing is colossal, and it’s a failure of planning, leadership, and execution,” the former vice president said in a searing critique of Trump’s handling of a crisis that has claimed 38 lives in the United States.

“Anyone who needs to be tested based on medical guidance should be tested at no charge,” added Biden, who rolled out his own plan for combating the outbreak and said Trump was welcome to “adopt all of it” immediately.

Biden, 77, is in a heated race for the Democratic presidential nomination against his 78-year-old rival Sanders.

Both candidates have canceled recent campaign rallies ahead of the next round of Democratic primaries Tuesday, March 10, in Arizona, Florida, Illinois and Ohio.

The Sanders campaign has “asked all staff to work from home, and will no longer hold large events or door-to-door canvasses, instead moving to digital formats and outreach wherever possible,” it said in a statement retweeted by communications director Mike Casca.

Sanders, in his own Thursday address, warned of casualties and economic chaos on a potentially massive scale.

“In terms of potential deaths and the impact on our economy, the crisis we face from coronavirus is on the scale of a major war, and we must act accordingly,” said the leftist senator from Vermont, who trails Biden in the Democratic nomination race.

“Unfortunately, in this time of international crisis, it is clear to me at least that we have an administration that is largely incompetent, and whose incompetence and recklessness have threatened the lives of many, many people in our country,” he added.

Biden and Sanders face off in a debate on Sunday, March 15. Democratic officials announced they were shifting the venue from Arizona to Washington over coronavirus fears.

While Biden unveiled a multi-pronged approach to tackling the crisis including “immediate bold measures” to help Americans hurting economically, Sanders called on government to take emergency steps including placing an immediate moratorium on evictions, foreclosures and utility shut-offs.

Democrats said they were negotiating with Trump’s administration over a bill that would provide free coronavirus testing nationwide, paid sick leave, and extended protections for furloughed workers. – Rappler.com