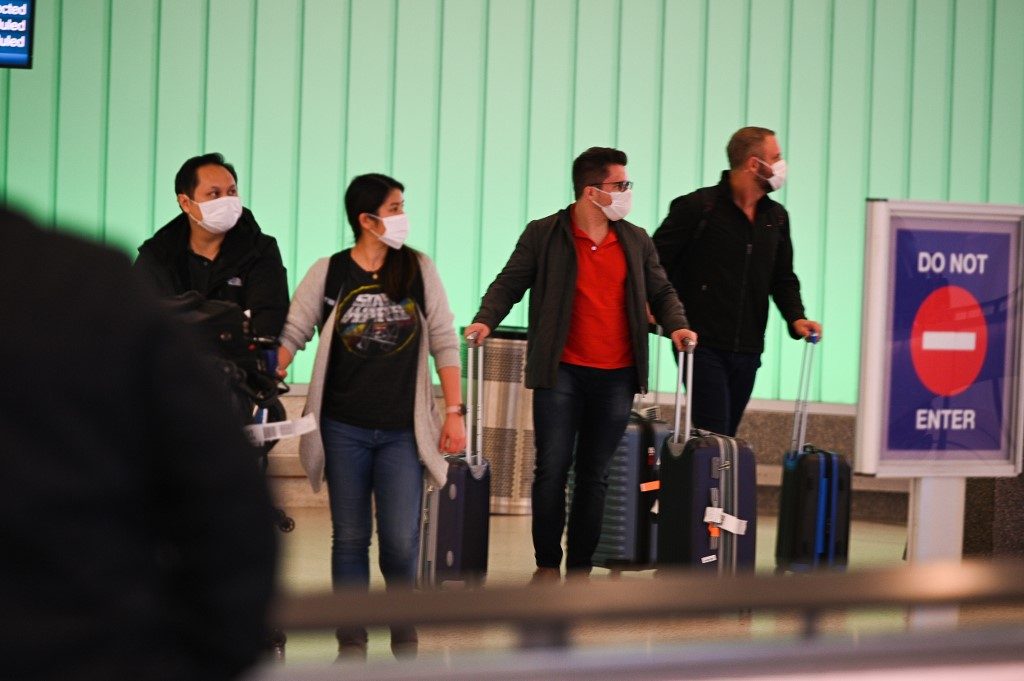 LOS ANGELES, USA – The final planeloads of European passengers flew into an eerily quiet Los Angeles airport Friday, March 13, wheeling their luggage past hand sanitizer stations as the hours ticked down to a 30-day travel ban.

US President Donald Trump’s sweeping moratorium over the coronavirus pandemic has created uncertainty for many tourists who planned their vacations to California months in advance. (READ: Trump emergency frees up to $50 billion in funds for coronavirus)

Waiting inside the arrivals terminal was Eugenio Stewart, a 46-year-old limousine driver.

He had donned sunglasses and two sets of gloves, and bought a $6 mask from a hardware store, after learning he was picking up a passenger from badly virus-struck Italy.

“If the passenger was from another country I wouldn’t wear this,” he said.

“I’ve been doing this for a year, and a half and clients are always coughing and sneezing — so in this case I don’t want to take any risks.”

Hoping he wouldn’t offend his client, Stewart added: “Safety first, feelings after… hopefully he’ll be wearing a mask too.”

Janne Gartman, 31, clutching a giant, bright-red snowboard bag after arriving from Copenhagen said: “We are here for 10 days but haven’t bought our ticket back so the return is really a question mark.”

The travel restriction on the EU’s Schengen border-free zone from midnight Eastern Time (0400 GMT Saturday) notably excludes Britain and Ireland, and does not include US citizens returning from Europe.

But for those like Mathilda Tennysdotter, living in the US on a work visa, the ban meant she had to dash back to Los Angeles immediately from a visit home.

“My mom woke me up at like six in the morning,” said the 29-year-old Swede.

“I wouldn’t be let in past today, so I had to be here today… it’s a 30-day ban but you never know how long it’s going to last.

“This is a big, big pandemic.”

Solveig Djonnelian, 26, from Norway, also had to change her flights at the last minute to beat the deadline.

“It’s been a crazy couple of days,” she said.

One Italian woman arriving via Paris expressed relief that she had been allowed in without problems.

“All good, thank God!” she said, adding she had encountered “no tests, no questions.”

Gartman said plane attendants on his flight from Denmark had tried to keep their distance from passengers where possible.

Customs and immigration “was more flexible than ever” with no additional questions or temperature control, and only short lines, he added. – Rappler.com