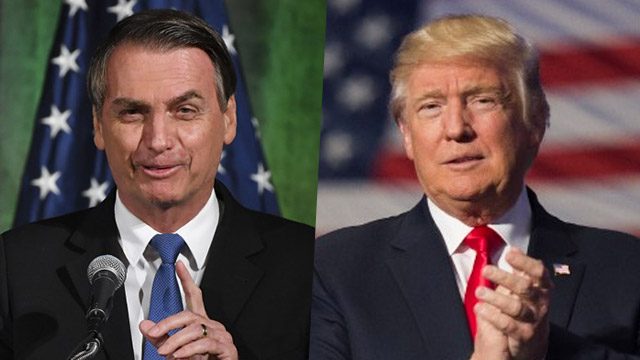 RIO DE JANEIRO, Brazil – At least 5 Brazilians who traveled with President Jair Bolsonaro on a US visit including meetings with his counterpart Donald Trump, have tested positive for the novel coronavirus, officials and media reports said Saturday, March 14.

The far-right leader’s four-day trip to south Florida, which included a swanky dinner last Saturday at a Trump golf resort, had a surprise outcome: it appears to have become an infection cluster in the coronavirus pandemic.

That has led Trump and Bolsonaro, who had both been criticized for downplaying the gravity of the outbreak, to get tested themselves.

Other top officials have meanwhile gone into self-quarantine.

After the Brazilian government revealed Thursday that Bolsonaro’s communications chief, Fabio Wajngarten, had been infected, a string of others on the trip tested positive.

Bolsonaro’s lawyer, Karina Kufa, and Senator Nelsinho Trad announced their positive test results on Twitter. The Brazilian embassy in Washington tweeted that Bolsonaro’s appointee for ambassador to the US, Nestor Forster, was infected as well.

A businessman who was on the trip has also tested positive, asking that his identity not be revealed, newspaper Folha de Sao Paulo reported.

Mayor Suarez, who met with the Brazilian delegation Monday, announced his test result in a video message Friday.

Others involved have gone into self-quarantine, including US Senators Lindsey Graham and Rick Scott.

The minister “is at his home in Brasilia in isolation,” and his test results are expected Saturday, the foreign ministry told AFP in an email.

Bolsonaro announced Friday his test result had come back negative, in a Facebook post he accompanied with a picture of himself making an obscene arm gesture.

Health Minister Luis Enrique Mandetta has recommended Bolsonaro undergo two additional tests and isolate himself for two weeks, in line with the ministry’s own protocols, a spokesman said.

Trump, who initially said he did not need to be tested, said Saturday he had decided to go ahead with the test after all. His results came back negative. – Rappler.com