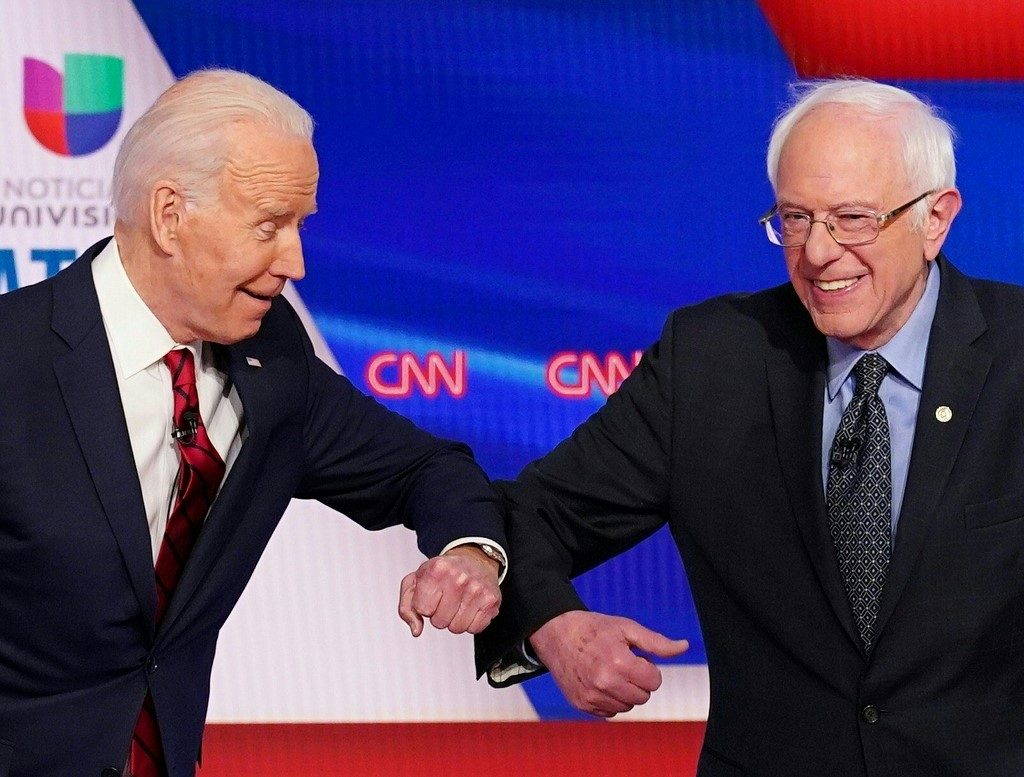 Facebook Twitter Copy URL
Copied
As Arizona, Florida, and Illinois prepare to vote between Joe Biden and Bernie Sanders in the Democratic primaries, there is confusion over whether polling stations will be safe, given the pandemic

MIAMI, USA – Millions of anxious Americans troop to polling stations on Tuesday, March 17, in 3 states, but not Ohio, as the coronavirus pandemic roils the nation’s Democratic primaries featuring frontrunner Joe Biden and his rival Bernie Sanders.

Campaigning has shifted from rallies to online events, candidate debates are audience-free, and multiple states have postponed their primaries as the virus, which has killed more than 80 people nationwide, prompts unprecedented alterations to the political landscape in an election year.

Governor Mike DeWine, a Republican, defied a court ruling and declared a health emergency late Monday — hours before residents of the industrial Midwestern battleground were to begin casting ballots. (READ: U.S. ramps up virus response with shutdowns, rate cut and a curfew)

Democrats are in the midst of choosing a nominee who will challenge Republican President Donald Trump in November’s election, but doubts and concerns have undercut the process.

As Arizona, Florida, and Illinois prepare to vote Tuesday, there is confusion over whether polling stations will be safe, given the pandemic.

Voters are also conflicted about venturing out to cast ballots after Trump urged Americans to restrict gatherings to groups of fewer than 10.

‘Democracy must go on’

Despite DeWine’s move to shutter polling stations in Ohio, he appeared to be a lone official voice calling for delay, and failed to win support from Trump, who said it was “up to the states” to make the call.

Ultimately, the president said, “I think postponing is unnecessary.”

But the vote could be undermined in part by a potential scare factor for the elderly, who are at highest risk of contracting COVID-19.

Officials in Florida, with the most delegates in play Tuesday, said the state is pulling out all the stops to keep the process safe.

In Arizona, Governor Doug Ducey said state and Democratic Party officials agreed that the primary should go on.

“We have no guarantee that there will be a time in the future when it will be safer than tomorrow,” Ducey said Monday.

“Democracy must go on.”

Biden, 77, tops polling by significant margins in Arizona, Illinois and especially Florida, where the former vice-president could strike a hammer blow against his rival by building an insurmountable lead in the delegate count.

Tuesday may be a make-or-break moment for the leftist Sanders, who will face mounting pressure to quit if he does not score a major upset.

Meanwhile, Americans are staying home from work or school by the millions as the country implements emergency measures against a worsening crisis.

Kentucky on Monday announced a delay in its primary from May until June, while Georgia, which was next in line to vote on March 24, is delaying until May.

Louisiana had earlier postponed its April election to June 20.

Biden and Sanders say they will campaign exclusively online for now — a scenario unheard of at the height of a US presidential primary battle.

Both are taking precautions during the outbreak: they are washing hands frequently, staff is working from home, and live campaign events have been scrapped.

The inability to campaign in person imposes a particular handicap on Sanders, who has consistently mobilized large and enthusiastic crowds at his events.

Sanders has acknowledged he is now the underdog in the delegate race but stressed his progressive movement has “transformed” the 2020 campaign.

“We have in many ways won the ideological struggle,” he said, by drawing voters and rival Democratic candidates towards his more liberal policies, including tuition-free public college.

He said the pandemic served as an example of why Americans would be better served by a universal health care system.

But he also struck a note of unity.

“At this unbelievably difficult moment, where so many people are very, very nervous and appropriately so, this is a time when we must come together,” Sanders said.

Biden has hammered Sanders’ so-called “Medicare for All” plan as unrealistic given today’s political divisions, saying Sanders has yet to explain how he would pay for such a costly reshaping of the economy.

“People are looking for results, not a revolution,” Biden said during Sunday’s one-on-one debate, referring to Sanders’ call for radical socio-economic change.

But on Monday, in a video posted on his Twitter feed, Biden echoed Sanders’ message of unity.

“We are going to overcome this coronavirus,” he said. “Please, please take care of yourselves.” – Rappler.com