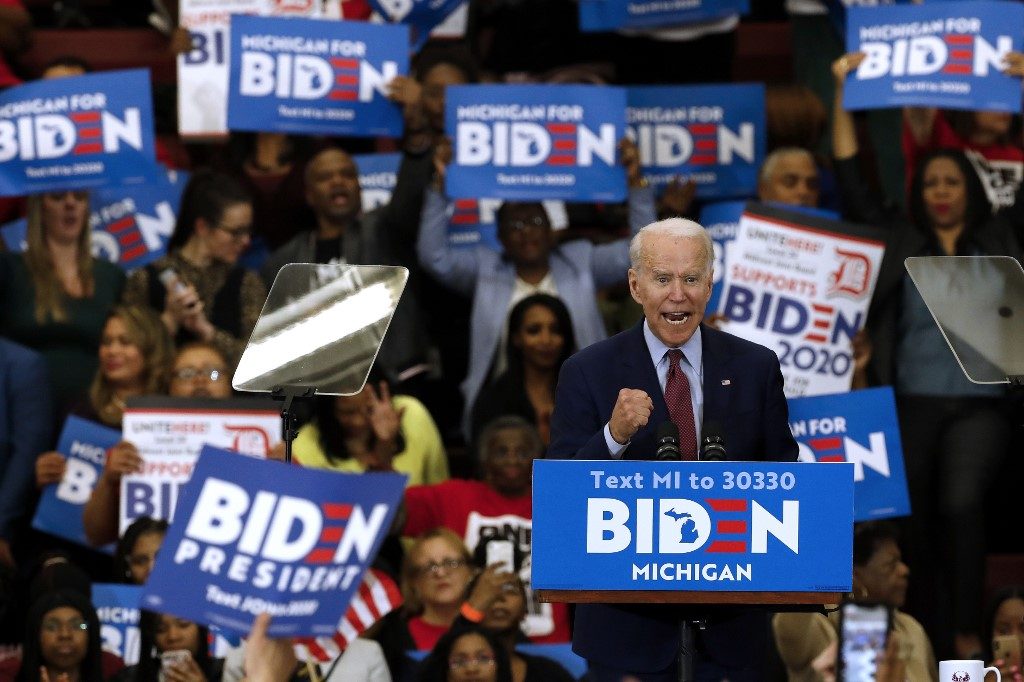 Facebook Twitter Copy URL
Copied
As the US grapples with combating the spreading coronavirus pandemic, voters hand the former vice president victory in delegate-rich Florida, as well as Illinois and Arizona

As the United States grappled with combating the spreading coronavirus pandemic, voters handed the former vice president victory in delegate-rich Florida, as well as Illinois and Arizona.

The command performance speaks to the eagerness of many Democrats to coalesce around a moderate flag bearer, to challenge Republican President Donald Trump, after several other candidates dropped out of the contest in recent weeks and endorsed Biden.

In Florida, the 77-year-old won 62% to 23% against Sanders, a 78-year-old self-described “democratic socialist” senator from Vermont.

Biden was ahead by 23 percentage points in Illinois, with 89 percent of precincts reporting.

And in Arizona, where polls closed last, Biden was coasting to a third definitive win – and his 19th victory in the last 24 contests.

“Our campaign has had a very good night,” Biden said in televised remarks from his home in Delaware.

“We’ve moved closer to securing the Democratic Party’s nomination for president, and we’re doing it by building a broad coalition that we need to win in November.”

By all accounts it is an astonishing reversal of fortune for Biden, whose campaign was left for dead just one month ago after poor showings in early voting states.

But following a string of victories in high-profile contests starting with South Carolina in late February, and continuing into his show of strength Tuesday, Biden now has a commanding lead in the all-important race for the delegates needed to become the nominee.

“No Dem has ever come back from anything like this deficit,” tweeted Axelrod, chief strategist for Barack Obama’s two successful presidential campaigns.

“The race for the nomination is over. That is the reality @BernieSanders faces.”

On Tuesday Biden’s delegate count stood at 1,147 compared to Sanders’s 861, according to a New York Times rolling tally. A candidate needs 1,991 delegates to secure the Democratic nomination and face Trump in the November election.

Biden has long said that Americans want pragmatic results, not the political “revolution” advocated by Sanders.

But he reached out on Tuesday by appealing to Sanders supporters.

“To young voters who have been inspired by Senator Sanders, I hear you,” Biden said.

Sanders delivered a 20-minute speech online Tuesday. But he did not mention the primaries, focusing instead on his recommendations for addressing the coronavirus pandemic, including injecting $2 trillion in funding to prevent deaths and “avoid an economic catastrophe.”

A fourth state, Ohio, was scheduled to vote Tuesday, but it postponed its elections until June on orders of Republican Governor Mike DeWine, who told voters to stay home during the escalating public health emergency.

The United States officially has more than 6,300 coronavirus cases, although that is believed to be a fraction of the real number, which has been depressed by delays in testing.

Election authorities had braced for disruptions and the Trump administration urged Americans to avoid gatherings of more than 10 people.

Despite hurdles, the states managed to successfully host their primaries.

In Florida, Gabriela Carrilho, a 51-year-old who works in marketing, donned gloves before casting her ballot at a nearly deserted elementary school in Miami Beach.

“I think if you don’t participate, then things never change,” she said.

She and others said they felt safe voting.

“There was hand sanitizer at every single station,” said 29-year-old Matt Don. “They kept a safe distance from me. Everybody in there is keeping safe.”

Americans are staying home from work or school by the millions as the country implements emergency measures against a worsening health crisis.

Maryland on Tuesday became the latest state to delay voting, pushing its primary from April 28 to June 2.

Kentucky and Louisiana have postponed their elections to June, while Georgia is delaying from next week until May. – Rappler.com