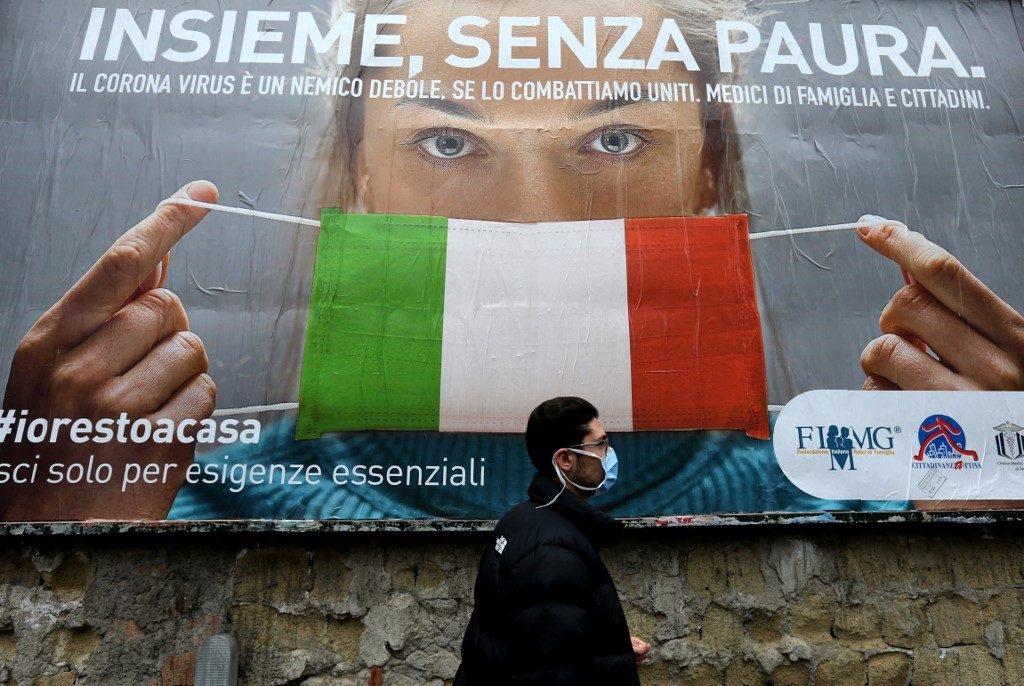 The Mediterranean country’s world-topping toll from its month-long crisis approached 5,500 and the number of COVID-19 infections neared 60,000.

But top health officials sounded – while not upbeat – encouraged to see daily deaths fall back from Saturday’s grisly 793 to a slightly less shocking 651.

The number of new infections rose by a relatively modest 10.4%.

“I hope and we all hope that these figures can be borne out in the coming days. But do not let your guard down.” (READ: Russia sends virus experts, medics to Italy)

Italy has sacrificed its economy and liberties by shutting down and banning almost everything to halt the spread of a virus the government views as an existential threat.

Conte has also indicated that the national lockdown will almost certainly be extended for an unknown number of weeks or even months.

Police fines for those wandering the streets without a good excuse have been cranked up in the hardest-hit north around Milan from 206 euros to 5,000 euros ($5,360).

Saturday’s record death toll suggested that everything the Italian authorities were trying was failing.

“We must not get too enthusiastic or over-interpret things,” the government’s scientific committee expert Franco Locatelli cautioned.

But, he added: “It is a sign that we welcome positively”.

Italy’s toll since the day the first European died of COVID-19 in Milan’s Lombardy region on February 21 now stands at 5,476.

“These figures are always a matter of either seeing the glass as half full or half empty,” said Lombardy’s regional health chief Giulio Gallera.

“Today, the glass is half full. But we are not declaring victory just yet.”

Containment measures around Lombardy have been in effect since March 8 – 5 days longer than for Italy as a whole.

Some of the local measures around Milan’s financial district and surrounding towns are even stricter that those for Italy as a whole.

Both local and national officials pleaded with Italians while announcing their restrictions to give up their freedoms for the nation’s good for two weeks.

The two-week deadline in Lombardy expired on Sunday.

The stakes were high – and the new numbers showed the measures might just be bearing fruit.

It had also been reporting about two-thirds of Italy’s coronavirus deaths throughout the crisis.

The region of 10 million officially registered 55.5% of Sunday’s COVID-19 deaths.

Yet a range of other statistics pointed to a world-class healthcare system that was being tested to the utmost.

Sunday’s figures showed the number of patients receiving intensive care rising above 3,000 for the first time.

There were just 650 intensive care patients with COVID-19 two weeks ago. – Rappler.com