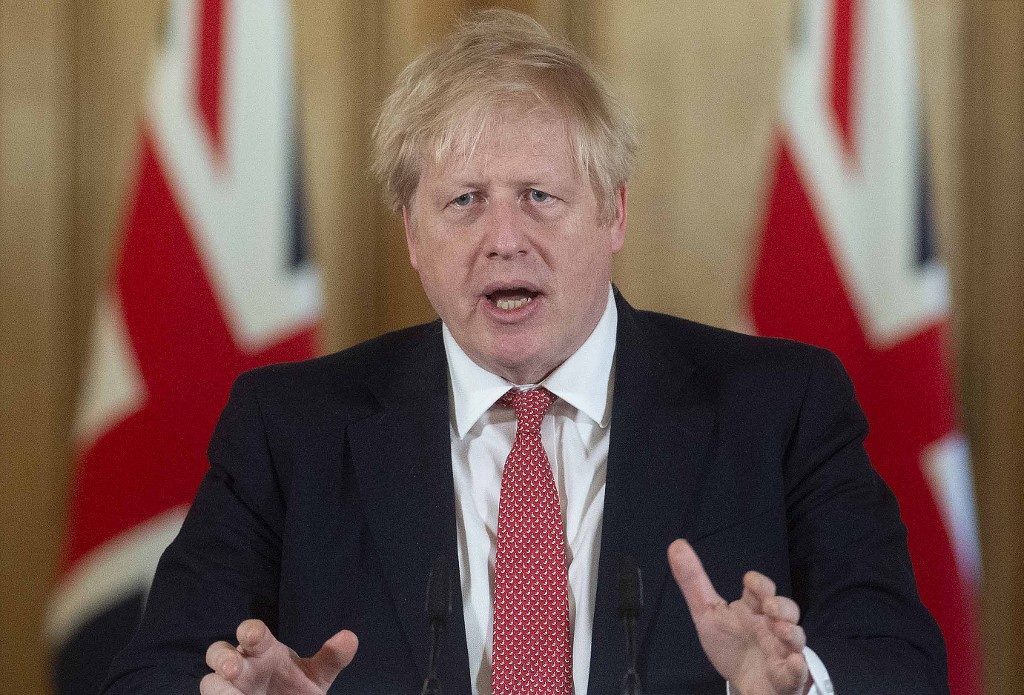 Facebook Twitter Copy URL
Copied
(UPDATED) The government says a total of 14,579 cases have so far been confirmed in Britain, while the number of deaths has risen by almost 200 to 759

Johnson said he began feeling unwell on Thursday, March 26, and was tested on the personal advice of England’s chief medical officer Chris Whitty.

Whitty, who has been working closely alongside Johnson, later said he was in self-isolation, “after experiencing symptoms compatible with COVID-19 last night (Thursday).”

Chief scientific adviser Patrick Vallance, who with Whitty has led the public health response, said he had no symptoms.

The news came as the government said a total of 14,579 cases have so far been confirmed in Britain, while the number of deaths has risen by almost 200 to 759.

Johnson, 55, announced the diagnosis in a video message on his 10 Downing Street Twitter account: “Over the last 24 hours I have developed mild symptoms and tested positive for coronavirus.

“I am now self-isolating, but I will continue to lead the government’s response via video-conference as we fight this virus,” he said.

“Be in no doubt that I can continue thanks to the wizardry of modern technology to communicate with all my top team to lead the national fightback against coronavirus.”

Over the last 24 hours I have developed mild symptoms and tested positive for coronavirus.

I am now self-isolating, but I will continue to lead the government’s response via video-conference as we fight this virus.

Together we will beat this. #StayHomeSaveLives pic.twitter.com/9Te6aFP0Ri

Johnson’s test was carried out in No 10 by NHS staff, his spokesman told reporters, as questions were asked whether other senior ministers could be affected.

The premier would self-isolate for 7 days and work from the flat above 11 Downing Street, where he lives.

“He had a couple of mild symptoms in relation to a cough and a temperature. From the moment he had symptoms he took steps to make sure that he was not in close contact with anyone.”

Downing Street said Johnson was “continuing to do all of the same functions” as before his diagnosis. Whitty said he would continue to advise with help from his deputies.

There was no comment on the health of Johnson’s partner, Carrie Symonds who is in self-isolation. She is pregnant with the couple’s first child.

But the spokesman said it had been a “significant period of time” since Johnson met Queen Elizabeth II, 93.

She has been with her 98-year-old husband, Prince Philip at Windsor Castle, west of London, since March 19, as a precaution.

Johnson, who in early March insisted the virus would not stop him shaking hands, was pictured speaking to the queen by telephone instead of meeting her in person for a weekly audience.

“Her Majesty the Queen remains in good health…and is following all the appropriate advice with regards to her welfare,” he added.

Earlier this week, Prince Charles, the queen’s eldest son and heir, tested positive for the virus and is recovering in Scotland.

The leader of the main opposition Labour party, Jeremy Corbyn, wished Johnson “a speedy recovery” and underlined the threat from the virus to the whole country.

“Coronavirus can and does affect anyone. Everyone be safe. Our own health depends on everybody else,” he tweeted.

A similar message was issued by EU Brexit negotiator Michel Barnier, who has also come down with the illness.

Little more than an hour after Johnson’s announcement, Hancock also posted a video on social media from home to confirm he too had contracted the virus.

“I have also had some mild symptoms of coronavirus and upon medical advice, I was tested and that test has been positive and I will be self-isolating here until next Thursday,” said Hancock, who is in charge of the National Health Service.

One of Hancock’s deputies, Nadine Dorries, has previously tested positive for coronavirus.

The government confirmed this week that if Johnson was incapacitated, Foreign Secretary Dominic Raab would temporarily assume the role of prime minister.

Johnson’s cabinet of senior ministers began video-conference meetings this week, and the daily briefing on the outbreak moved online, with questions posed remotely by journalists.

Finance Minister Rishi Sunak has not had symptoms and had not been tested, a Treasury spokesman said.

Sunak was seen outside Downing Street on Thursday night, joining in a nationwide show of support for healthcare workers involved in treating coronavirus patients. – Rappler.com