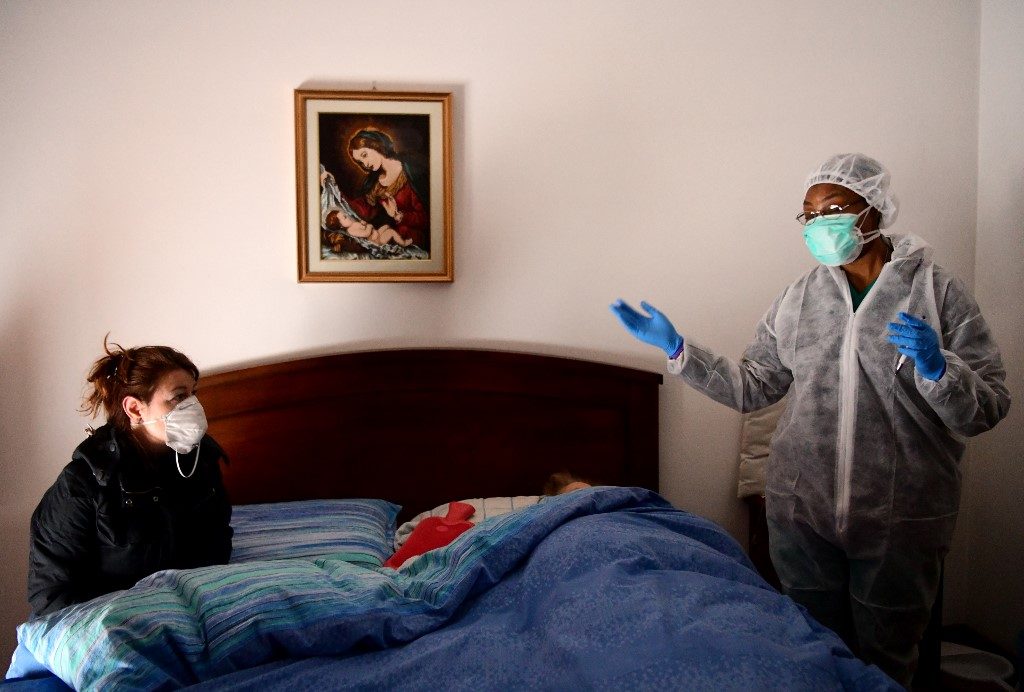 LONDON, United Kingdom – Italy on Friday, March 27, recorded the most daily deaths of any country since the start of the coronavirus pandemic and Spain had its deadliest day, as British Prime Minister Boris Johnson became the first major world leader to test positive.

Italy reported 969 new deaths, Spain 769 deaths, and France 299 deaths as Europe reeled from a crisis that led the United States on Friday to finalize an unprecedented $2 trillion stimulus package.

In other grim milestones, AFP tallies showed more than 26,000 deaths worldwide, and a total of 300,000 cases now recorded in Europe, after the United States overtook China as the country with the most infections.

Italy showed a continuing downward trend in infection rates and Spain said its rate appeared to be slowing, but other countries were bracing for the virus’s full impact.

Ireland announced it was imposing a lockdown, with Prime Minister Leo Varadkar imploring his citizens to “stay at home, in all circumstances”.

The World Health Organization’s regional director for Africa warned the continent faced a “dramatic evolution” of the pandemic, as South Africa also began life under lockdown and reported its first COVID-19 death.

Johnson, whose country has seen more than 14,000 declared coronavirus cases and 759 deaths, said he had developed mild symptoms and tested positive.

“I am now self-isolating, but I will continue to lead the government’s response via video-conference as we fight this virus,” Johnson, who had initially resisted calls for a nationwide lockdown before changing course, wrote on Twitter.

Europe has suffered the brunt of the coronavirus crisis in recent weeks, with millions across the continent on lockdown and the streets of Paris, Rome and Madrid eerily empty.

‘She just had a cough’

In France, where nearly 2,000 people have died, the government announced it was extending its stay-at-home order until at least April 15.

While severe, the 299 new deaths it recorded Friday were lower than the 365 reported the previous day.

The death of a 16-year-old girl from the virus has particularly shaken France, shattering the belief of many young people that they were immune.

The girl’s mother Sabine told AFP that Julie “just had a cough” at first but deteriorated quickly. She died Wednesday, less than a week later.

“It’s unbearable,” Sabine said. “We were supposed to have a normal life.”

In the United States, known infections jumped past 100,000, surpassing China and Italy, with more than 1,500 deaths, according to a tracker at the Johns Hopkins University.

In New York City, the US epicenter of the crisis, health workers battled a surging toll, including an increasing number of younger patients.

They “didn’t listen about not going out or protecting themselves and washing their hands,” he said.

Wall Street slipped again after three days of recovering this month’s heavy losses, even as President Donald Trump signed into law the largest stimulus package in US history.

The package will pump $100 billion into hospitals and give checks of up to $3,400 for the average family of four, in the hopes of reviving spending after unemployment claims soared to a new record.

“This will deliver urgently needed relief to our nation’s families, workers and businesses. That’s what this is all about,” Trump said.

Trump also invoked an act usually used in wartime to order General Motors to speed up its commitment to make badly needed ventilators.

He said the move “should demonstrate clearly that we will not hesitate to use the full authority of the federal government to combat this crisis.”

Even as Europe readied its own stimulus measures, experts warned of misery that could rival the Great Depression, with millions suddenly unemployed.

“It is clear that we have entered a recession” that will be worse than in 2009 following the global financial crisis, International Monetary Fund chief Kristalina Georgieva said Friday.

The coronavirus first emerged in China late last year before spreading globally, with more than half a million declared cases in 183 countries and territories.

Over the last six days, as many new cases have been diagnosed around the world as in the previous 80 days.

Beijing managed to contain its spread with lockdowns and quarantines, and its epicentre Wuhan is easing severe movement restrictions in place for two months.

“Thick darkness has gathered over our squares, our streets and our cities; it has taken over our lives, filling everything with a deafening silence and a distressing void, that stops everything as it passes by,” he said.

“We find ourselves afraid and lost,” he said, describing the coronavirus as a “tempest”.

The WHO’s chief Tedros Adhanom Ghebreyesus told a virtual news conference in Geneva the dire lack of protective gear for frontline health workers was “one of the most urgent threats to our collective ability to save lives”.

The World Tourism Organization said Friday it expected tourist arrivals to drop by 20-30 percent this year, with losses of $300-450 billion internationally.

But there have been rays of hope.

Armed groups in Cameroon, the Philippines and Yemen have moved to reduce violence after UN Secretary-General Antonio Guterres appealed for ceasefires. – Rappler.com