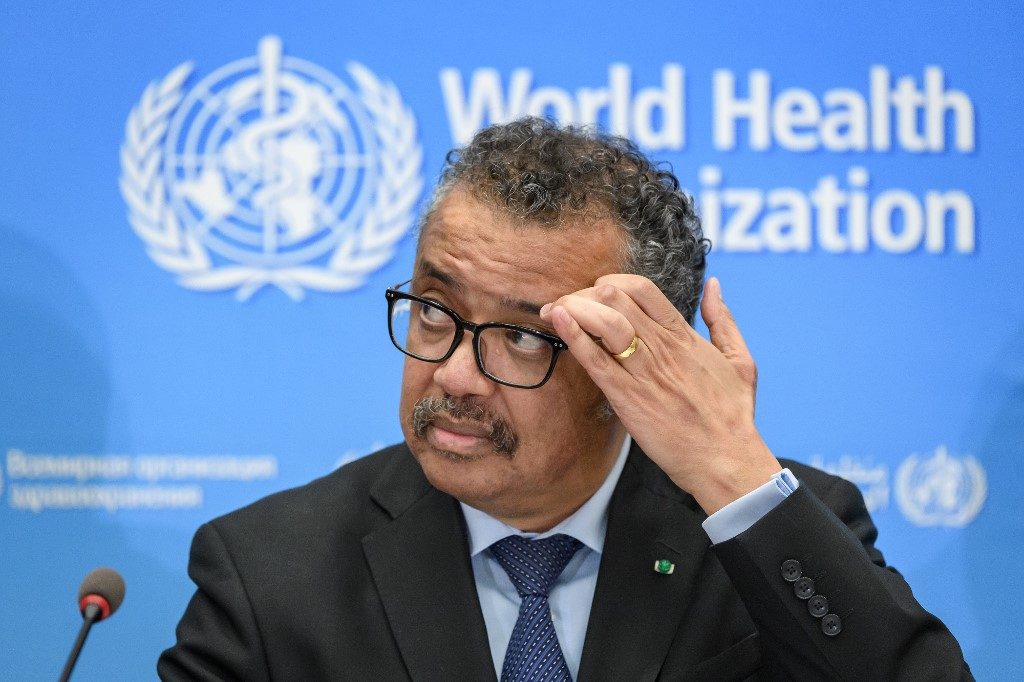 President Donald Trump has gone on an offensive with threats to withhold funding for the WHO, which is at the forefront of fighting the pandemic that has infected more than 1.5 million people worldwide since emerging in Wuhan, China late last year.

Critics say that Trump’s sudden threats against the WHO amount to a political ploy to find a foreign scapegoat as he comes under fire for not doing more to prepare for and control COVID-19, which has killed about 15,000 people in the United States.

Trump himself said in January that the United States had the coronavirus “totally under control” and predicted it may go away in April as temperatures rise.

Elaborating on Trump’s case against the WHO, the State Department said the WHO was too late in sounding the alarm over COVID-19 and overly deferential to China. It questioned why the Geneva-based body did not pursue a lead from Taiwan.

The United States is “deeply disturbed that Taiwan’s information was withheld from the global health community, as reflected in the WHO’s January 14, 2020 statement that there was no indication of human-to-human transmission,” a State Department spokesperson said.

“The WHO once again chose politics over public health,” she said, criticizing the WHO for denying Taiwan even observer status since 2016.

The WHO’s actions have “cost time and lives,” the spokesperson said.

Taiwan, which has succeeded in limiting the virus to just 5 deaths despite the island’s proximity and ties with China, warned the WHO on December 31 of human-to-human transmission, Vice President Chen Chien-Jen has said.

Chen, an epidemiologist, told the Financial Times that Taiwanese doctors had learned that colleagues in Wuhan were falling ill but that the WHO did not work to confirm the finding.

China considers Taiwan – a self-ruling democracy where the mainland’s defeated nationalists fled in 1949 – to be a province awaiting reunification and has sought to exclude it from all international organizations.

WHO Director-General Tedros Adhanom Ghebreyesus, in an appeal Wednesday for unity, said that he had been subjected to insults including racial slights since the public health crisis began.

The Ethiopian doctor turned diplomat did not mention the United States – the largest donor to the WHO at more than $400 million last year – but singled out non-member Taiwan.

“Three months ago, this attack came from Taiwan,” Tedros told reporters in Geneva, referring to online criticism and insults.

“Taiwan, the foreign ministry also, they know the campaign. They didn’t disassociate themselves. They even started criticizing me in the middle of all that insult and slur, but I didn’t care,” Tedros said.

The comments sparked anger in Taiwan, which described Tedros’ comments as “baseless” and said it was seeking an apology for “slander.”

“Our country has never encouraged the public to launch personal attacks against him or made any racially discriminatory comments,” foreign ministry spokeswoman Joanne Ou told reporters on Thursday.

In a Facebook post, President Tsai Ing-wen invited Tedros to visit Taiwan and learn from its handling of the epidemic, challenging him to “resist pressure from China.”

“We have been blocked from international organizations for many long years and we know what it feels like to be discriminated against and isolated more than anyone else,” she said.  (READ: Taiwan hits back at WHO exclusion under Beijing pressure)

Beijing responded that Tsai’s Democratic Progressive Party, which emphasizes Taiwan’s separate identity, has engaged in “political manipulation” over the WHO.

“Its true aim is to seek independence through the pandemic. We are firmly opposed to this, and their scheme will never succeed,” a foreign ministry spokesman said in Beijing.

Critics of Tedros have accused the WHO under his leadership of being too close to Beijing and complimentary of China’s response to the coronavirus.

But some public health experts say that the WHO had little choice but to cooperate with China to preserve access in Wuhan. – Rappler.com