Apr 12, 2020 9:42 PM PHT
Agence France-Presse
Facebook Twitter Copy URL
Copied
It is unclear how quickly he will be able to return to work 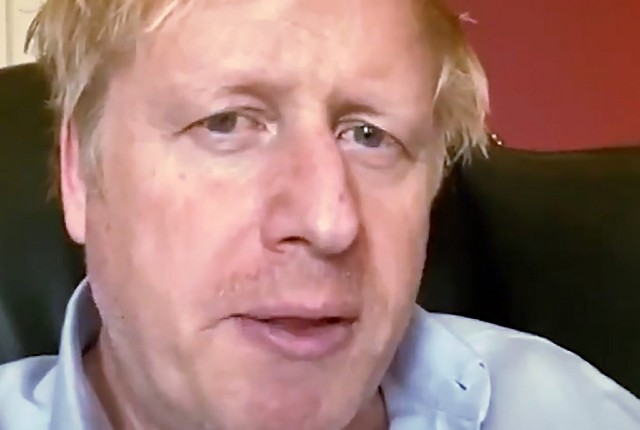 LONDON, United Kingdom – Boris Johnson left hospital on Sunday, April 12, to convalesce from coronavirus at Chequers, the country estate of British prime ministers, officials said, a week after he was admitted and then spent 3 days in intensive care.

The 55-year-old leader will not be immediately returning to work, on the advice of his medical staff, a Downing Street spokesman said.

“The PM has been discharged from hospital to continue his recovery at Chequers,” he said.

“He wishes to thank everybody at St Thomas’ (Hospital) for the brilliant care he has received.

“All of his thoughts are with those affected by this illness.”

Johnson, who was admitted to the state-run central London hospital last Sunday and spent Monday to Thursday in its intensive care unit, had earlier voiced his gratitude to his carers there.

“I can’t thank them enough. I owe them my life,” he said in a first public statement since being hospitalized.

The news of his continued improvement contrasted with the overall picture across Britain, as it braces to pass the grim milestone of 10,000 hospital deaths from COVID-19.

The country is now seeing daily death tolls to match those previously seen in Europe’s hardest-hit nations Italy and Spain, after recording nearly 1,000 fatalities on each of the last two days.

The actual figure, amid hopes of hitting a peak, may be far higher as the count does not include those who have died in care homes and the community.

However, the overall latest number of British hospital deaths – 9,875 – remains well short of the totals in Italy, Spain and the United States.

Globally, the death toll from the virus soared past 109,000 this weekend, with more than 1.7 million reported infections.

Britain’s tally of confirmed cases has climbed close to 80,000, but that is thought to be only a fraction of the true level of infections as testing for the virus has been limited.

Johnson is the most high-profile leader to suffer from the coronavirus.

It is unclear how quickly he will be able to return to work, with Foreign Secretary Dominic Raab currently deputizing for him.

“I will never, ever be able to repay you and I will never stop thanking you,” she said on Twitter, adding she felt “incredibly lucky.”

“There were times last week that were very dark indeed. My heart goes out to all those in similar situations, worried sick about their loved ones.”

It also remains uncertain when Britain might be able to lift stringent social distancing measures rolled out on March 23.

Implemented for an initial 3 weeks, the lockdown is set for a formal review next week and is likely to remain in place until at least the end of the month.

Queen Elizabeth II urged Britons to keep staying home, in what is believed to be her first pre-recorded Easter address, released by Buckingham Palace on Saturday evening, April 11.

“By keeping apart we keep others safe,” the 93-year-old monarch said. “We know that coronavirus will not overcome us.”

Her resolute comments came a week after a rare televised address to the nation in which she told people to unite to beat COVID-19.

Meanwhile, the government has been forced to defend its rollout of personal protective equipment (PPE) for medical staff during the pandemic.

“We are making sure we get the equipment to the front line,” senior minister Alok Sharma said on Sunday, noting a “squeeze on supply” amid “huge global demand for PPE.”

But he said a lack of PPE was not to blame for any of the cases.

However, a senior doctor who has since died pleaded last month on social media with Johnson for better protection against the disease.

Meanwhile, evidence is reportedly growing that the pandemic is having a disproportionate impact on people from minority backgrounds, who make up a large proportion of the NHS workforce.

Research suggests that more than a third of critically ill coronavirus patients in British hospitals are black, Asian or from another ethnic minority, according to the BBC – Rappler.com