Apr 15, 2020 6:27 PM PHT
Agence France-Presse
Facebook Twitter Copy URL
Copied
Turnout is the highest for a generation, and an exit poll by national broadcaster KBS projects the ruling Democratic party and a sister organization would take between 155 and 178 places in the 300-seat National Assembly 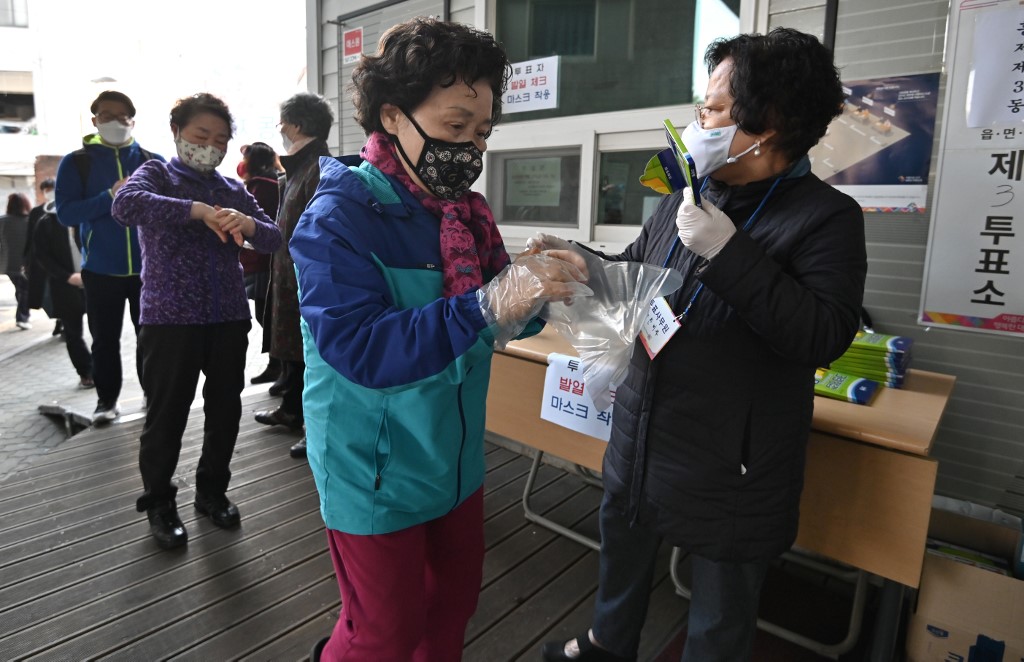 SEOUL, South Korea – South Korean voters turned out in force Wednesday, April 15, to back President Moon Jae-in’s handling of the coronavirus epidemic, putting on compulsory face masks and gloves to give his Democratic party a parliamentary majority according to exit polls.

South Korea was among the first countries with a major virus outbreak to hold a national election since the global pandemic began, and a raft of safety measures were in place around the vote.

Turnout was the highest for a generation, and an exit poll by national broadcaster KBS projected the ruling Democratic party and a sister organization would take between 155 and 178 places in the 300-seat National Assembly.

It predicted the main opposition United Front Party and its sister grouping would take between 107 and 130 seats.

Voters in obligatory masks lined up at least one meter (3 feet) apart outside polling stations and had their temperatures checked before being allowed in.

All had to clean their hands with sanitizer and don plastic gloves, while those with fevers cast their ballots in separate booths that were disinfected after each use.

“Because of the coronavirus, people are keeping their distance and everyone is wearing gloves.”

For a time, South Korea had the world’s second-largest outbreak, before it was largely brought under control through widespread testing and a contact-tracing drive, along with widely observed social distancing.

Those self-quarantining at home and asymptomatic were allowed to vote immediately after the polls closed, although those showing coronavirus symptoms were effectively disenfranchised.

Special polling stations had earlier been set up at central quarantine facilities to enable the confined to vote.

Campaigning was also affected by the outbreak: instead of the traditional handshakes and distributing of name cards, candidates kept their distance from citizens, bowing and offering an occasional fist bump.

Many turned to online media such as YouTube and Instagram to connect with voters, while some even volunteered to disinfect parts of their constituencies.

A survey conducted by Gallup Korea last week showed that 27% of respondents were reluctant to vote due to the epidemic.

But in the event turnout reached at least 63.8%, the highest in a parliamentary poll since at least 2000.

On the other side of the Demilitarized Zone that divides the peninsula, North Koreans marked in subdued fashion the birthday of late founding leader Kim Il-sung, with mask-wearing citizens laying flowers before his statue.

The anniversary is the most important date in the North Korean political calendar, but Pyongyang has cancelled several elements of the annual commemorations as it enforces strict anti-coronavirus measures.

South Korea’s relatively quick and effective handling of the epidemic has been a boon for the left-leaning Moon ahead of the vote, largely seen as a referendum on his performance.

The country uses a mix of first-past-the-post constituencies and proportional representation, and while the Democratic party was the largest in the outgoing parliament it did not hold a majority, relying on minority support to pass legislation.

Moon’s position was not at issue as he is directly elected, but just a few months ago he was being assailed by critics over sluggish economic growth and his dovish approach to the nuclear-armed North.

But South Korea on Wednesday announced 27 new virus cases – the seventh consecutive day with fewer than 40. Overall, the country has had nearly 11,000 infections and 225 deaths.

Kim Ki-chul, 33, said the recent falls in new cases encouraged him to come out to cast his ballot.

“Compared to the way the epidemic has been handled in other countries, South Korea showed outstanding disinfecting and containment capabilities, which increased my trust in the government,” he added. – Rappler.com