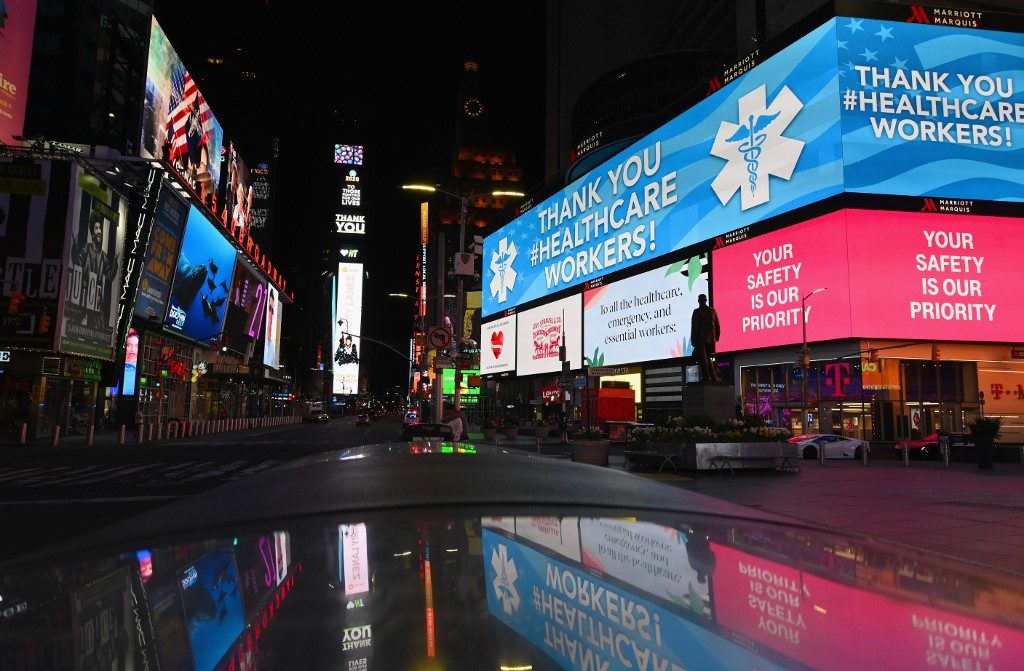 NEW YORK, USA – New York Governor Andrew Cuomo on Thursday, April 16, extended his shutdown order in the US coronavirus outbreak epicenter until May 15, citing data showing improved conditions but insisting on the need to maintain vigilance.

The governor pointed to falling rates of hospitalizations and intensive care admissions, but said infection rates would have to decrease significantly before the economy could begin re-opening.

“I would like to see that infection rate get down even more,” Cuomo said, reporting that 606 more people had died in the last day, the lowest daily toll in 10 days.

“I don’t want to project beyond that period,” he said. “One month is a long time.”

The announcement came on the eve of the implementation of a directive mandating New Yorkers wear face coverings in public places where they cannot stay 6 feet (about two meters) apart.

Jamie O’Reilly, owner of a dog-walking business, said the continued shutdown was “stressful” but “you just have to roll with the punches.”

Actress Christine Rowan agreed, saying she’d be “pleasantly surprised” if the city was up and running by September.

“I’m keeping my expectations low and just trusting the process,” she said.

“It’s a pain in the ass but it’s sort of the new normal, for at least a little while.”

In a hopeful sign, Cuomo said New York state – where more than 11,500 people have died from COVID-19, with more than 213,700 confirmed infections – would donate 100 ventilators each to hard-hit New Jersey and Michigan and 50 to Maryland.

Less than a month ago, the state of some 20 million people was sounding desperate appeals for the life-saving devices.

Also on Thursday New York Mayor Bill de Blasio issued a frank appeal to the White House for federal assistance, as he unveiled a shaved budget for the city where coronavirus has slashed revenue.

His $89.3 billion budget for the fiscal year starting July 1 is $6 billion less than his initial proposal in January.

De Blasio said the city estimates a massive drop in tax revenue due to the coronavirus shutdown: $7.4 billion over the current fiscal year and the next.

“That is a horrifying figure,” the mayor said.

“No New Yorker is responsible for this horrible crisis, but New York has borne the brunt – we are the epicenter,” de Blasio continued.

“I made clear to the president his hometown needs him,” the mayor of America’s economic engine continued. “Anyone who wants that national recovery better take care of the places that will have to build this recovery.”

“If President Trump raises his voice, the Republican Senate will follow, period.”

The mayor’s proposed budget cuts included keeping the city’s outdoor pools closed for the summer, which he estimated could save New York $12 million.

Job losses from the coronavirus pandemic in the United States hit 22 million Thursday, according to government data, and the president has vowed to lay out plans for re-opening the world’s largest economy.

But like Cuomo, de Blasio warned that “it would be a huge mistake” to re-open “too early” the city that has most of its more than 8 million residents sheltering at home.

Both leaders have emphasized that mass testing is key to re-booting economic activity.

O’Reilly, who owns the dog-walking business, said the coronavirus shutdown has been particularly painful for those in the city who have lost income, but that “I really trust in our governor for putting people’s health first.”

“Why does the economy matter if we’re not around to spend any money because we’re all sick?” – Rappler.com