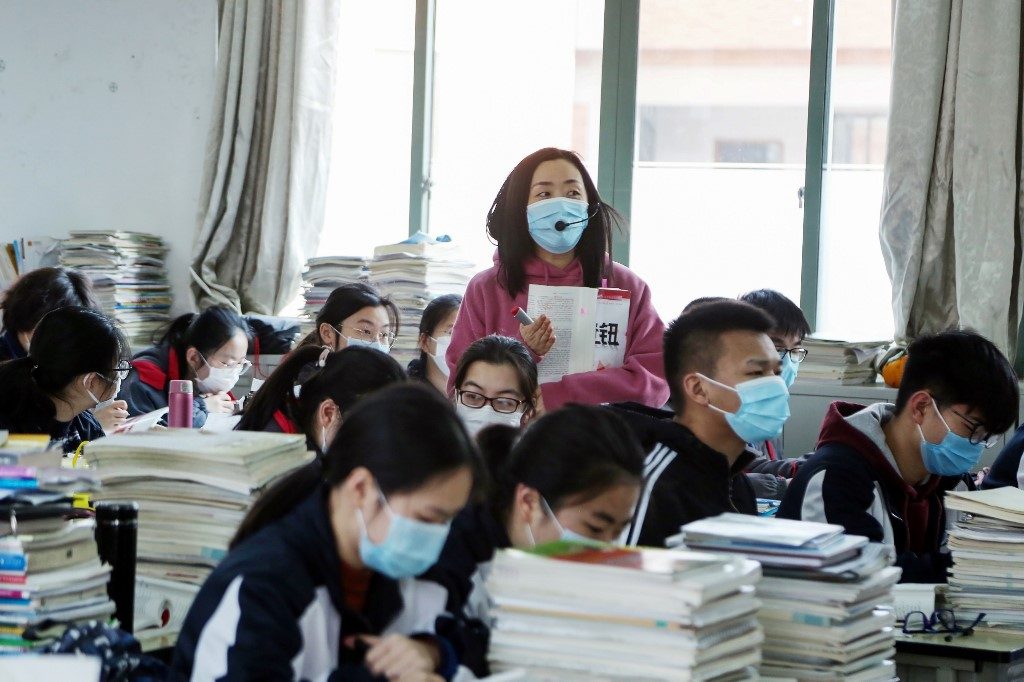 WASHINGTON, USA – The number of confirmed coronavirus cases worldwide soared past 3 million on Monday, April 27, as several European nations and a handful of US states began taking steps to reopen their shuttered economies.

But as schools and shops reopened in some parts of Europe, British Prime Minister Boris Johnson emerged after his own battle with the virus to call for patience in the UK, saying it was too early to follow suit.

Around the world the pandemic has killed more than 209,000 people and infected more than 3 million, with the highest death toll – over 55,000 – in the United States, according to an AFP tally.

Well over half of all deaths are in Europe, with the toll hitting 126,233 on the continent Monday.

With some of Europe’s worst-hit nations reporting drops in daily death counts, governments are exploring how to relax confinement orders exacting their own damaging economic and psychological tolls.

Italy, the first European country to go into lockdown 7 weeks ago, began allowing some construction and factory workers to go back to work on Monday.

Starting May 4, Italians will be able to exercise outdoors and visit relatives, but only if they respect social distancing and wear masks.

Restaurants can offer takeout and wholesale stores can resume business on the same day, with other shops following on May 18, along with museums and libraries.

In Spain, which began easing one of the world’s tightest coronavirus lockdowns on Sunday, people will be allowed out for exercise and to take walks from May 2.

Spain and France are to announce more detailed plans on Tuesday.

France’s lockdown, which started on March 17, will begin to be lifted on May 11, under plans to be unveiled by Prime Minister Edouard Philippe.

Schools will reopen gradually. But the government has already said that restaurants, cafes, and cinemas will remain closed for the time being and large public gatherings prohibited.

In Switzerland, Croatia, and Serbia, many small shops were back in business on Monday, while children in Norway returned to primary school.

Hairdressers, florists, dentists, and others went back to work in Switzerland in the first stage of a three-phase plan.

“I’m delighted that we’re starting up again. If we don’t work, things are dead,” hairdresser Anita Ayma said in Geneva.

With the UK starting to “turn the tide” of an outbreak that has killed more than 21,000, Johnson warned against any hasty moves.

Looking thinner and with his blond mane longer after his hospital stay, the 55-year-old said he could not “throw away all the effort and the sacrifice of the British people and to risk a second major outbreak.”

Responses varied elsewhere as leaders grapple with how to balance public safety with personal freedoms and economic relief.

In Nigeria, President Muhammadu Buhari said the lockdown in the largest city Lagos and capital Abuja will be eased from May 4 but the wearing of facemasks will be mandatory.

In the United States, several states are rolling back confinement measures that have wiped out tens of millions of jobs.

There have been warnings of inadequate testing capacity, but President Donald Trump provided assurances on Monday that testing was being “rapidly” expanded.

“Testing is not going to be a problem at all,” he said at a White House briefing.

A majority of US states do not yet have sufficient COVID-19 testing to consider relaxing stay-at-home orders, according to an analysis by Harvard researchers and the health news site Stat.

Trump also said he expected to see a “lot” of schools open up even if there is not much time remaining in the school year.

While New York Governor Andrew Cuomo sketched out plans to resume some manufacturing and construction activity in low-risk parts of the hard-hit state on May 15, several Republican-led states are speeding up the timeline.

Rejecting the advice of health experts, Georgia has allowed thousands of businesses to resume operations and Governor Brian Kemp said the state’s shelter-in-place order would be lifted on Thursday.

Tennessee permitted restaurants to reopen Monday and Texas Governor Greg Abbott announced that all retail stores, restaurants, movie theaters, malls, museums, and libraries would be allowed to reopen on Friday with 25% capacity.

But Californian Governor Gavin Newsom on Monday admonished crowds who flocked to beaches at the weekend.

Plans to ease restrictions have been met with both fear and impatience from citizens facing a deeply uncertain future.

Forecasts warn of the worst global recession in a century, with oil prices tumbling and the travel and tourism sector badly hammered.

Starting Monday, masks became obligatory on public transport and in most shops in Germany, a measure residents described as both necessary and irksome.

“It’s warm, slippery, you can’t breathe well, but if it’s to avoid infection, I’m fine with it,” Emil, a commuter at a Berlin train station, told AFP.

China, which has touted its success in reining in the outbreak that started on its soil, sent tens of thousands of high school students back to school in Beijing and Shanghai after months of closures.

But school life wasn’t quite back to normal, with smaller classes, temperature checks, strict social distancing, and no physical education.

Meanwhile, millions of Muslims around the world are adjusting to an unusual Ramadan without the mass prayers in mosques or large family meals that normally frame the daily fasting.

Saudi Arabia partially lifted its curfew, but said it would maintain a round-the-clock lockdown in the holy city of Mecca. – Rappler.com