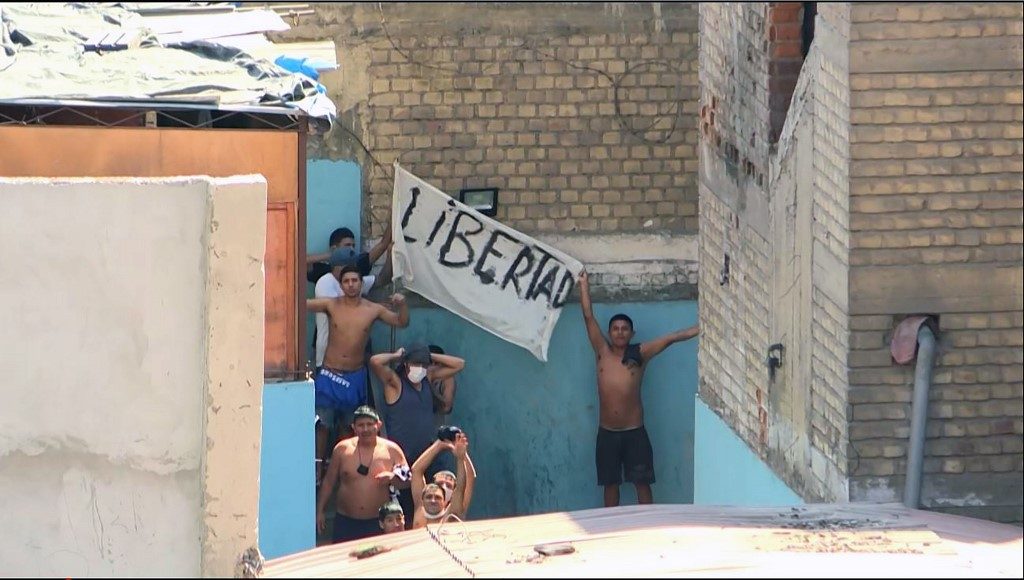 Facebook Twitter Copy URL
Copied
'We're dying. Don't let us die infected. We need medicine,' reads a banner held up by some of the prisoners

LIMA, Peru – Nine inmates were killed and scores of guards wounded when rioting broke out at a prison in Lima after two inmates died from COVID-19, authorities in Peru said Tuesday, April 28.

The riot broke out Monday at the city’s Castro Castro prison. By nightfall, authorities said the situation had been brought under control, giving an initial toll of 3 dead before gradually revising the figure upwards to 9. (READ: Prisoners dread virus outbreak in race against time)

Aside from the 9 killed, 60 prison guards, 5 police officers and two inmates were wounded in the unrest, the National Penitentiary Institute (INPE) said in a statement.

The death toll from COVID-19 in the Peru’s overcrowded prison system has risen to 15, following the deaths of two inmates over the weekend, while more than 600 inmates are infected.

The riot at Castro Castro was the latest in a spate of prison unrest linked to growing fears among inmates over the spread of the virus.

“We’re dying. Don’t let us die infected. We need medicine,” read a banner held up by some of the prisoners. (READ: U.N. urges prisoner releases to avoid coronavirus contagion)

The protest ended when the Lurigancho warden signed an agreement with the prisoners concerning their medical attention, a prison systems spokesperson told AFP.

A relative of one of the inmates outside the prison pleased for an early release.

“They are condemned to a prison sentence, but not to death here. Please, we are asking for mercy for them,” the woman, who identified herself by her first name, Vilma, told AFP.

The notoriously overcrowded Lurigancho was built to house 2,500 prisoners but is currently believed to have more than 10,000.

Many of the fatalities in the Castro Castro riot were apparently shot after police were called in to help guards quell the unrest. The riot’s objective, according to the authorities, was to “facilitate a mass breakout.”

Police said the bodies of the victims were taken to the city’s central morgue for examination.

President Martin Vizcarra earlier announced that he would pardon 3,000 prisoners deemed most vulnerable to the coronavirus – and the rioters were clamoring to be included in the scheme, Villar said.

The inmates burned mattresses and hung signs demanding their release, fearing that they could contract the disease.

Anguished relatives gathered outside Castro Castro on Tuesday demanding news of their incarcerated loved ones.

“There are many inmates who have died inside, or are wounded, so they’ll die without anyone looking after them,” a relative, Jazmin Delgado, told AFP.

The INPE said that authorities would remain “inflexible towards any act of indiscipline,” and urged the prison population “to maintain a peaceful coexistence, especially as we find ourselves in a national emergency.”

“The problem in the prison health system is not new,” Villar said, “but it has been aggravated by the coronavirus pandemic.”

Another riot, which authorities quelled, broke out Monday in the prison in the Andean city of Huancayo, some 200 kilometers (125 miles) southeast of Lima, after the coronavirus claimed the lives of two prisoners there.

Earlier in April two inmates were killed during a prison riot in the northern city of Chiclayo, sparked by concerns over the pandemic’s spread.

More than 97,000 inmates are housed in 68 prisons across the South American country, an excess of some 50,000 over prison capacity, the INPE said. (READ: LIST: Countries releasing prisoners over coronavirus fears)

In addition, 169 prison guards have tested positive for the coronavirus, of which 7 have died. – Rappler.com