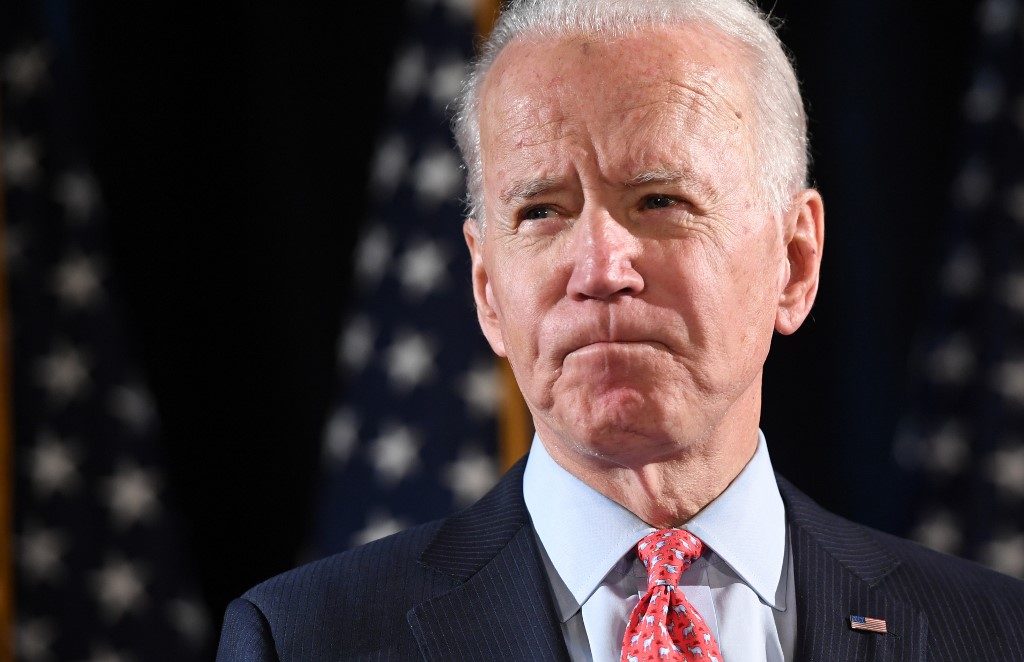 Facebook Twitter Copy URL
Copied
Tara Reade, 56, claims that the assault took place in 1993, when she was a 29-year-old staff assistant in the office of Biden, then a US senator from Delaware

WASHINGTON, USA – Pressure is mounting on Democratic presidential hopeful Joe Biden to personally respond to a sexual assault allegation made by a former Senate aide – despite a strong denial issued by his campaign.

Tara Reade, 56, claims that the assault took place in 1993, when she was a 29-year-old staff assistant in the office of Biden, then a US senator from Delaware.

Kate Bedingfield, Biden’s deputy campaign manager and communications director, has issued a statement dismissing the allegation but there has been no comment so far from the 77-year-old former vice president himself. (READ: Hillary Clinton endorses Biden’s White House bid)

“Vice President Biden has dedicated his public life to changing the culture and the laws around violence against women,” Bedingfield said in the April 13 statement.

“What is clear about this claim: it is untrue,” she said. “This absolutely did not happen.”

The denial has however done little to calm media coverage of the claims, which have drowned out other news about Biden, such as his search for a running mate, who he has pledged will be a woman.

President Donald Trump’s campaign manager Brad Parscale has flooded his Twitter feed with mocking references to Reade’s allegation, ignoring the string of accusations made by women against his own candidate.

More than a dozen women have accused the real estate mogul of sexual misconduct before he became president, including a writer who claims he raped her in a Manhattan department store.

Biden has not been asked directly about Reade’s allegation in the interviews he has given from his Delaware home, where he has been confined because of the coronavirus pandemic.

The question has also not come up at the various online events he has held, including one on Wednesday, April 29, where he addressed Israel, the coronavirus crisis, and young voters at a virtual fundraising event.

‘Had me up against the wall’

According to Reade, the assault took place in August 1993 in a hallway on Capitol Hill.

“We were alone, and it was the strangest thing,” Reade said in a late March interview on the Katie Halper Show podcast. “There was no, like, exchange, really, he just had me up against the wall.

“His hands were on me and underneath my clothes and, yeah, he went, he went down my skirt but then up inside it and he penetrated me with his fingers,” she said.

“He was kissing me at the same time,” she said.

Reade said she pulled away and Biden allegedly said: “Come on man, I heard you liked me.”

“For me everything shattered at that moment,” Reade said.

Reade has since recounted her story to several other media outlets, and she filed an incident report with the Washington police in early April – seen by AFP – in which she did not name Biden.

“This is an inactive case,” a police spokesman told AFP when asked about the status of the matter, without offering any further details.

Reade told the right-leaning Washington Examiner that she had filed the report to show she was serious – and to establish a paper trail.

Other women have accused Biden of touching or embracing them inappropriately in the past, and Reade’s initial claims were similar – less severe than her most recent allegations. (READ: Biden bids to quell storm over campaign trail kiss)

The New York Times reported that it had interviewed Reade on multiple occasions, along with her friends and others who worked for Biden in the early 1990s.

According to the Times, no former Biden staffers corroborated her account, and a pattern of misconduct was not uncovered.

Reade said she had also related the incident to her brother.

The allegations have led some supporters of Senator Bernie Sanders, who dropped out of the race for the Democratic nomination and endorsed Biden, to call on the former vice president to end his White House bid.

“Now is the time to deal with the ramifications of Tara Reade’s accusations, not this fall,” said Claire Sandberg, the former national organizing director of the Sanders campaign.

“There is simply no moral justification for Biden to continue as the presumptive nominee,” Sandberg said.

“Out of respect for survivors and for the good of the country, he should withdraw from the race.” – Rappler.com