Man arrested after opening fire on Cuban embassy in Washington 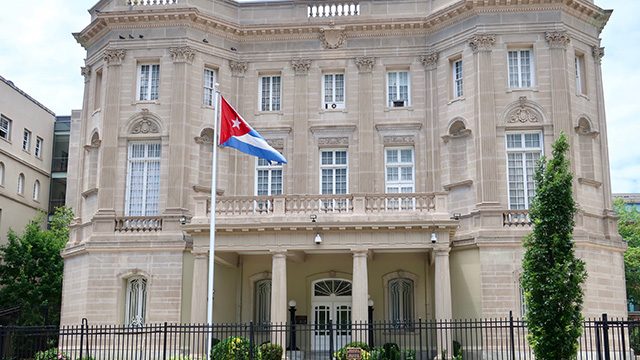 WASHINGTON, DC, USA (UPDATED) – A man was arrested early Thursday, April 30, after opening fire on the Cuban embassy in Washington, the US Secret Service said.

The unidentified person fired multiple rounds from a high-powered assault rifle, damaging the building but injuring no one, according to the Secret Service and the embassy.

“This morning at approximately 2:15 am, US Secret Service officers responded to the Embassy of Cuba following reports of shots fired,” the Secret Service said in a statement.

“No injuries were reported at the scene.”

Washington’s police department confirmed the incident but said an investigation was in the hands of the Secret Service, which often handles investigations involving foreign diplomats.

Local media said the man fired about 30 rounds at the embassy, located on 16th Street at the edge of the Adams Morgan neighborhood, a normally bustling area full of bars and restaurants but which has been stilled by the coronavirus shutdown.

The embassy posted pictures of bullet holes in the exterior walls and columns, a window and a light fixture.

“Mission staff was not injured and is safe. Investigation is in progress,” Cuban Foreign Minister Bruno Rodriguez tweeted.

“It is the responsibility of states to protect diplomats accredited to them and their facilities,” he said.

The administration of President Donald Trump has chilled relations with Havana, reversing course after an opening initiated by his predecessor Barack Obama.

In October 2017, it expelled 15 Cuban diplomats after a rash of incidents in which US embassy staff in Cuba reported as yet unexplained head pains, dizziness and hearing loss. – Rappler.com