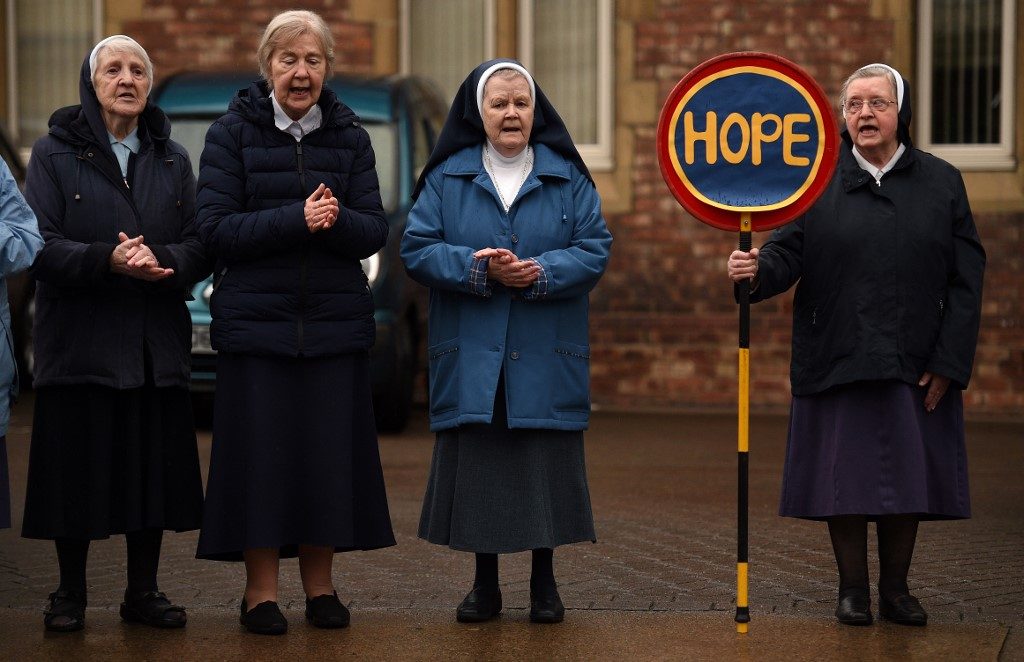 LONDON, United Kingdom – Britain is “past the peak” of its coronavirus outbreak, Prime Minister Boris Johnson said on Thursday, April 30, despite recording another 674 deaths in the last 24 hours.

The coronavirus death is now 26,711, the world’s third-most highest behind the United States and Italy, after changing its reporting to include community as well as hospital deaths on Wednesday.

But Johnson, making his first appearance at a daily government briefing since his own battle with COVID-19, said there were reasons for optimism.

“For the first time, we are past the peak of this disease…and we are on the downward slope,” he told reporters.

“And we can now see the sunlight and the pastures ahead of us. So it’s vital that we don’t now lose control and run slap into a second and even bigger mountain.”

The government’s chief scientific adviser Patrick Vallance said the rate of transmission was now below one, with fewer hospital admissions and people in intensive care.

That was having an effect on overall deaths, he said.

“The R (rate of transmission) is below 1.0. We think it’s between 0.6 and 0.9 across the nation. Maybe a little lower in some places, a little higher in others but it’s below 1.0 across the country,” he added, referring to the number of people infected by one person with COVID-19.

Johnson’s return to work has coincided with increased pressure to lift a lockdown that was imposed in late March to cut close contact transmission of the virus.

A review is due on May 7 and he said a “roadmap” would be published next week about the government’s plan to ease restrictions, after concerns about the economic effect of the social distancing measures.

The government has also been criticized for imposing a lockdown later than most other European countries.

An opinion poll by Ipsos Mori found that 66% of those surveyed believed the government was too slow to introduce restrictions.

Keir Starmer, the new leader of the opposition Labor Party, told Sky News he feared the UK was on track to have one of the worst death rates in Europe.

“What you’re going to get next week is really a roadmap, a menu of options, the dates and times of each individual measure will be very much driven by where we are in the epidemic,” Johnson said.

“We’ve got to get your business going again,” he added.

“But it’s actually vital, if we’re to bounce back as strongly as I think we can, that we don’t have a second bout of this…because that would really do economic damage.”

Experts were looking to develop “ingenious ways” of suppressing the disease that would take into account local conditions, he said, adding that masks could form part of the solution.

“I do think that face coverings will be useful both for epidemiological reasons, but also for giving people confidence that they can go back to work,” he said.

Britain saw a sharp spike in its death toll on Wednesday after including out-of-hospital deaths for the first time, though Chief Medical Officer Chris Whitty advised against drawing international comparisons until the pandemic was over.

Johnson spent 3 days in intensive care with the virus, saying his situation could have gone “either way.”

“Let’s be frank, tragically, thousands of people have been less fortunate than I was,” he said on Thursday.

He said he had a “much happier” hospital visit on Wedneday for the birth of his baby boy with partner Carrie Symonds.

Vallance said that results of a US trial of the drug remdesivir were a “promising first step,” although warned it would not be a “magic bullet” in treating the disease.

Earlier in the day, Britain celebrated the 100th birthday of a World War II veteran whose staggering fundraising efforts have inspired the country in the depths of the outbreak.

“Captain Tom” Moore, who raised more than £30 million ($37 million) for health service charities by doing laps of his garden, was honored with a Royal Air Force flypast and 140,000 birthday cards. – Rappler.com