Japan extends virus state of emergency until May 31 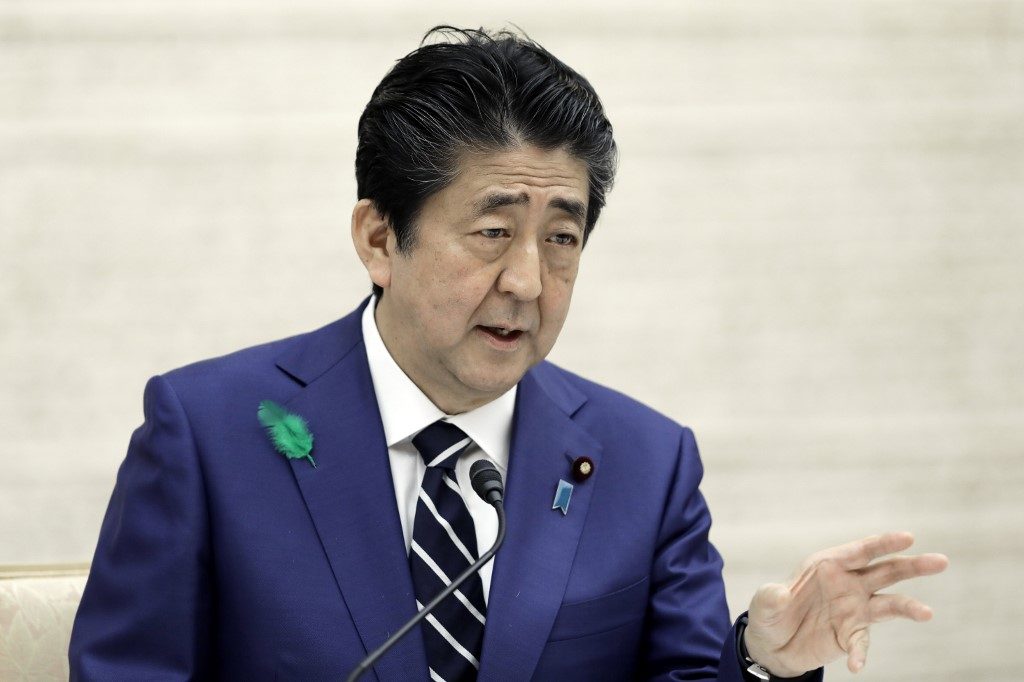 Facebook Twitter Copy URL
Copied
'I will extend the period of the state of emergency I declared on April 7 until May 31. The area covered is all prefectures in the nation,' Shinzo Abe says

TOKYO, Japan – Japan’s prime minister on Monday, May 4, extended a state of emergency over the coronavirus until the end of May, as the government warned it was too soon to lift restrictions.

“I will extend the period of the state of emergency I declared on April 7 until May 31. The area covered is all prefectures in the nation,” Shinzo Abe said after a meeting to discuss the measures.

Abe declared a month-long state of emergency that initially covered Tokyo and six other regions on April 7, later expanding it to cover the entire country.

It had been due to expire on Wednesday, but the country’s minister for the virus response Yasutoshi Nishimura said earlier that new infections were still growing.

“The number of new cases has declined, but unfortunately the decrease has not reached the targeted level,” he said during a meeting with an expert panel advising the government on the pandemic.

“As the healthcare sector remains under pressure, we need continued cooperation from people.”

Japan’s virus outbreak remains comparatively small compared to those seen in parts of Europe and the United States, with over 15,000 infections recorded and 510 deaths.

But the extension was backed by both experts advising the government and regional governors, with concerns that a sudden spike in cases that would overwhelm healthcare systems remains possible.

The state of emergency falls far short of the harshest measures seen in parts of Europe and the United States. It allows local governors to urge people to stay at home and call on businesses to stay shut.

But officials cannot compel citizens to comply, and there are no punishments for those who fail to do so.

The government is expected to urge residents in 13 high-risk prefectures, including Japan’s biggest cities, to continue cutting person-to-person contact by 80 percent and exercise other strict social distancing measures.

But museums, libraries and some other facilities are likely to be allowed to reopen so long as they take anti-virus measures.

For the rest of Japan, prefectures will be allowed to loosen restrictions on business closures and small gatherings but residents will still be asked not to travel outside their home regions. Bars and nightclubs will be asked to remain shut.

It remains unclear when and whether schools, many of which have been closed since March, will be able to reopen, with officials recently suggesting a possible phased reopening with certain key grades resuming before others.

Abe said experts would review the situation around May 14, and the measures could be lifted at that time depending on the situation in a given region.

Japan recorded its first coronavirus infection in mid-January, and came under early pressure with a mass outbreak on board the Diamond Princess cruise ship docked off the city of Yokohama.

Officials ordered an on-ship quarantine after a former passenger was diagnosed with the virus, but more than 700 people on board eventually contracted the disease and 13 died.

Despite so far avoiding the devastating tolls seen in places like Italy and New York, there have been persistent fears that Japan’s healthcare system could be quickly overwhelmed by a sudden spike in infections.

There are just five ICU beds per 100,000 people in Japan, less than half the number in Italy, and doctors’ associations have warned that hospitals are already stretched thin.

Measures have been implemented to try to ease the pressure, including sending coronavirus patients with mild symptoms to hotels for quarantine rather than keeping them in overcrowded hospitals.

The government has also said it is increasing testing capacity but continues to face criticism for the relatively low numbers of tests being carried out, in part because of stringent criteria. – Rappler.com