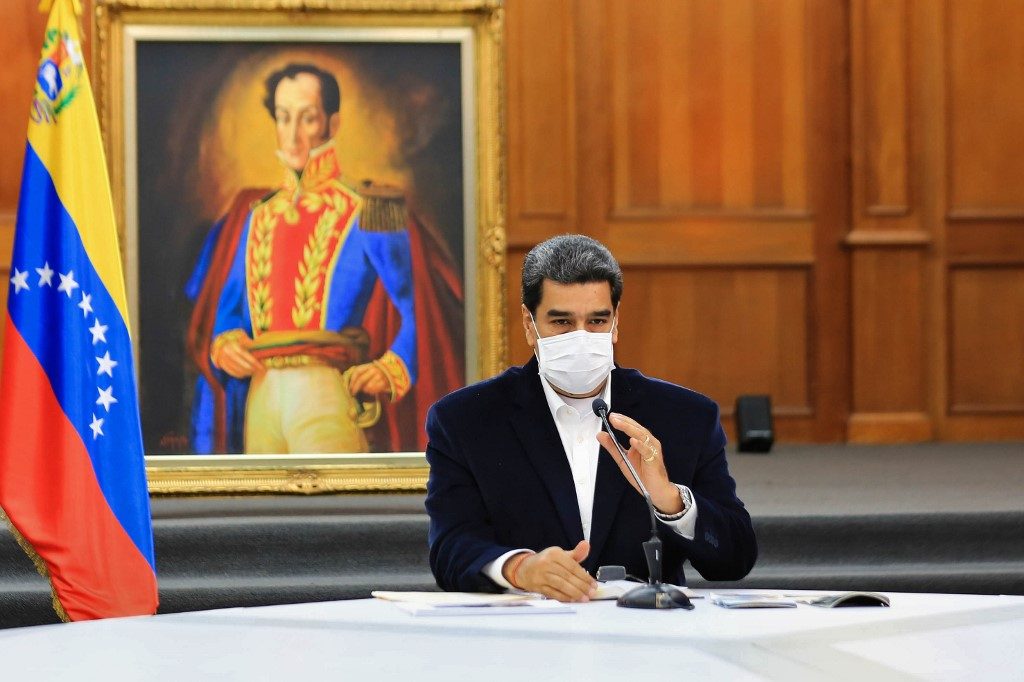 Facebook Twitter Copy URL
Copied
Venezuela President Nicolas Maduro appears on state television to show the passports of Luke Denman, 34, and Airan Berry, 41, and tells the Venezuelan military high command that the pair were members of the US security forces

CARACAS, Venezuela – Two Americans were detained in Venezuela on Monday, May 4,  on suspicion of plotting to topple President Nicolas Maduro’s government, which has accused US-backed opposition leader Juan Guaido of bankrolling the scheme.

The arrests came a day after the government said it foiled an “invasion” from the sea, killing 8 assailants and capturing two others.

Maduro appeared on state television to show the passports of Luke Denman, 34, and Airan Berry, 41, and told the Venezuelan military high command that the pair were members of the US security forces.

The United States – one of more than 50 countries backing Guaido as Venezuela’s acting president as he challenges Maduro for power – has slapped sanctions on PDVSA and allowed Guaido to use funds from frozen accounts belonging to the firm’s Houston-based subsidiary Citgo.

The Canadian-born Goudreau, an Iraq and Afghanistan veteran, is accused of training a mercenary force to invade Venezuela that disbanded after Colombian authorities seized a weapons shipment meant for the group.

Saab also shared on social media a video of Goudreau, who now runs a private security firm called Silvercorp USA, in which the former soldier claims an operation against Maduro’s regime is ongoing.

Guaido’s press team released a statement on Monday denying the accusations and insisting it had no agreements with private security firms.

On Sunday, May 3, Venezuela claimed a group traveling on speedboats and embarking from Colombia tried to land before dawn in the northern coastal state of La Guaira but were intercepted by the military and special police units.

Diosdado Cabello, deputy leader of the ruling Socialist Party, claimed the operation was “orchestrated” by the United States and its Drug Enforcement Agency (DEA), with Colombian support.

Colombia denied any involvement, while Maduro claimed on Monday that the mission’s aim was to assassinate him.

Venezuela frequently accuses Colombia of fomenting plots to overthrow the Maduro government and of allowing mercenaries to train in its territory.

Saab said authorities had detained 114 people and issued warrants for the arrest of 92 others accused of involvement in plots against Maduro and his regime since an alleged assassination attempt using explosives-laden drones in 2018.

He added that Venezuela had seized arms during the apparent invasion that were stolen from parliament during a failed military uprising led by Guaido last year.

The public prosecutor has launched a number of investigations against Guaido but has never ordered his arrest. – Rappler.com