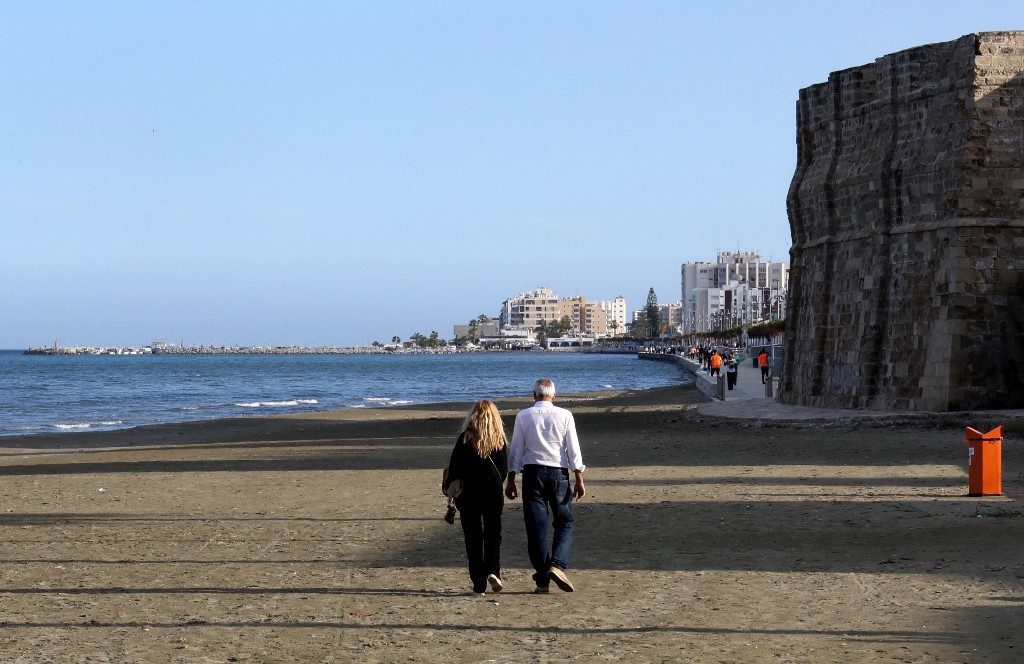 Facebook Twitter Copy URL
Copied
Cyprus is one of a clutch of normally highly open island nations – including Iceland, Malta and New Zealand – that have lately started easing, or are poised to ease, measures restricting internal movement

AYIA NAPA, Cyprus – Enjoying the loosening of a six-week coronavirus lockdown in Cyprus, Michalis Eveledis charged across pristine white sand and plunged headlong into the cool Mediterranean under a glaring sun.

“I am very glad to visit my beach and swim for the first time this year,” the 39-year-old resident of Ayia Napa – usually a magnet for foreign tourists but now deserted – said with a big grin.

The government this week began allowing people into the sea for the first time since March and permitted them to leave their homes up to 3 times, instead of just once, per day.

Cyprus is one of a clutch of normally highly open island nations – including Iceland, Malta and New Zealand – that have lately started easing, or are poised to ease, measures restricting internal movement.

All these nations have – so far, at least – scored impressively in containing the virus’ spread.

The Republic of Cyprus imposed a ban on most incoming passenger flights from March 21, after schools had been ordered shut and larger indoor gatherings banned on March 11, ahead of a curfew imposed late that month.

It seems to have worked: declared coronavirus fatalities stood at just 15 as the government eased its lockdown on Monday, May 4.

This puts the country in the top 7 performing EU nations for coronavirus deaths as a proportion of the population, according to declared data collated by AFP.

And Cyprus is in the top 10 countries worldwide for coronavirus screening tests as a proportion of its population, figures compiled by demographic data provider Worldometer show.

Iceland ranks best in the world among nation states on that metric, while Malta places fourth globally.

Instead, it issued non-binding restrictions and guidance limiting the size of gatherings – initially to 20, but increased to 50 as of Monday.

Kjartan Hreinn Njalsson, assistant to the Director of Health, is unequivocal about how Iceland arrested the spread of the virus.

But Njalsson also acknowledged that smaller countries have had an advantage over their more populous peers.

“It helps a lot when it comes to mobilizing and getting people to work with you. We are just 360,000 people, which… gives us an opportunity to build a sense of community around these actions.”

That point is echoed by Konstantinos Makris, an associate professor of environmental health at the Cyprus University of Technology.

“Island populations are more homogeneous and easier to communicate” with, he told AFP, adding that technical factors related to complexities of scale helped smaller nations get ahead on testing.

Testing has also been significant in northern Cyprus, a breakaway entity created after Turkey invaded in 1974 in response to a Greece-backed military coup.

More than 14,000 people have been tested for coronavirus in the north – a territory of 300,000 still only recognized by Ankara – while confirmed virus deaths stand at 4, according to authorities there.

The Republic of Cyprus, with 131 people per square kilometer, is slightly more densely populated than France (119), where the virus death toll stands at over 390 people per million.

Malta, meanwhile, has a high population density of 1,375 per square kilometer.

Malta’s only airport was shut in late March and the only travel in and out of the island since then has been via repatriation flights. The country has not yet eased internal restrictions, but plans to, albeit only very gradually.

“Population density might be important to consider in this period” when authorities start to unlock restrictions, Professor Makris noted.

Cyprus’ testing program will now focus heavily on people returning to work, according to Health Minister Constantinos Ioannou, who holds no illusions about the enormity of the challenge ahead.

If Cyprus manages to continue its effective suppression of the virus – by no means fully guaranteed, as social interactions increase from this week – it will remain extremely hard to open up to much of the rest of the world.

This brings major implications for the crucial tourism sector, a key component also of Malta’s and Iceland’s economies.

“It is an issue that concerns all of us,” Ioannou told AFP. “One idea we are contemplating is to open up our airports to countries that are on the same stage of the pandemic as we are.”

Another option is for tourists to be tested, either as they depart their country of origin, or upon arrival – but that would likely require testing systems that generate individual results in an hour, Ioannou added.

Among those fearing for the future is Elena Isaac, who opened her first restaurant in Ayia Napa a decade ago. She now operates 3 eateries and employs around 50 people.

“You can’t survive with no tourists,” she said. “It is impossible.” – Rappler.com