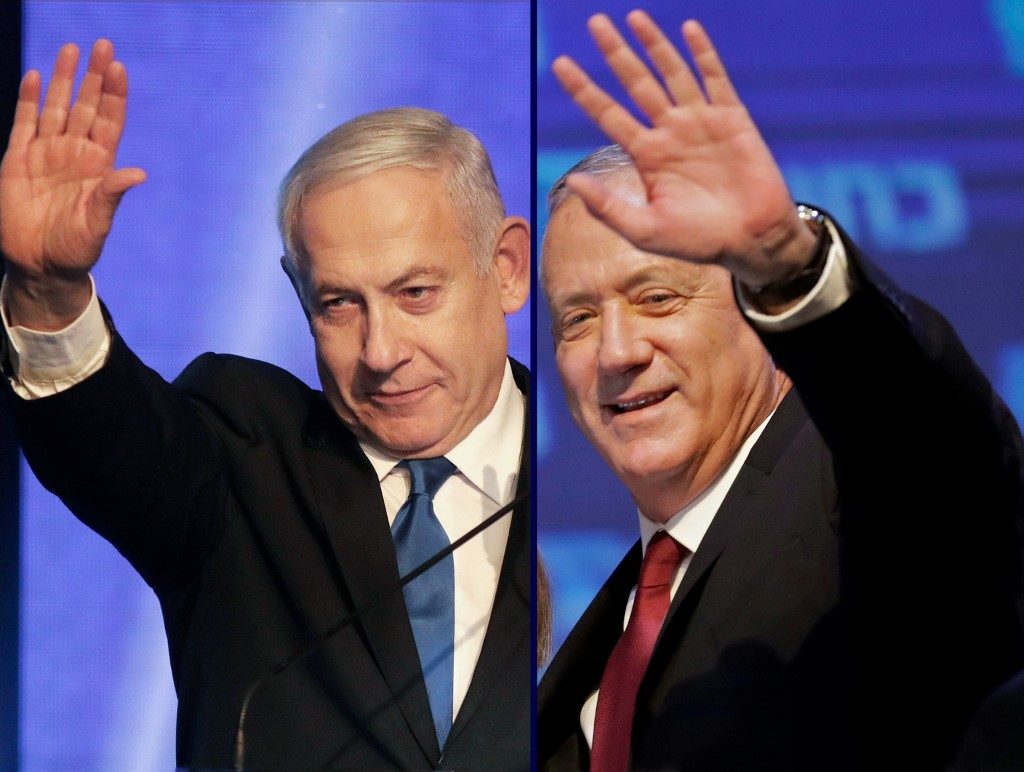 Facebook Twitter Copy URL
Copied
The two men have said they will swear in their new administration on May 13, with Benjamin Netanyahu remaining leader for 18 months, before handing over to Benny Gantz

JERUSALEM – Israeli lawmakers approved the formation of a unity government between Prime Minister Benjamin Netanyahu and his erstwhile rival Benny Gantz Thursday, May 7, inching towards an end to more than a year of deadlock.

Parliament voted by 71 votes to 37 to back the coalition deal that will see rightwing veteran premier Netanyahu share power with Benny Gantz, a centrist former military chief.

The two men have said they will swear in their new administration on May 13, with Netanyahu remaining leader for 18 months, before handing over to Gantz.

The other will serve as alternate PM, a new position in Israeli politics.

The proposed government had been challenged in the high court, with opponents arguing Netanyahu was ineligible to rule due to corruption indictments.

They also charge that certain provisions in the coalition deal break the law.

But the court ruled on Wednesday evening, May 6, that there was “no legal reason to prevent the formation of a government” led by Netanyahu.

It added that by approving the coalition it was “not seeking to diminish the severity of the charges” against Netanyahu, but concluded that those could be addressed in his trial, due to begin on May 24.

Netanyahu has been written off by pundits and rivals many times since taking power in 2009, but the man sometimes dubbed “the magician” has invariably found ways to remain in power.

As well as rebuilding an economy shaken by the coronavirus, the new government will also decide on the possible annexation of large parts of the West Bank, a move from which successive governments have refrained since Israel occupied the territory in the Six-Day War of 1967.

Israel has been without a stable government since December 2018, holding 3 successive elections in which Gantz’s centrist Blue and White and Netanyahu’s Likud were near neck-and-neck.

During that time Netanyahu has remained in power in a caretaker capacity.

He has also been charged with accepting improper gifts and illegally trading favors in exchange for positive media coverage.

He denies wrongdoing, but if the trial goes ahead as planned he will become the first serving Israeli leader to be tried.

After the third election in March, Gantz broke with large parts of his Blue and White alliance and agreed to form a unity government.

He said it was necessary to provide political stability as the country seeks to repair the economic damage wrought by a coronavirus outbreak that has infected more than 16,000 people.

Gantz’s critics, including many former allies, accused him of betraying his voters after campaigning for cleaner politics and pledging not to serve under an indicted prime minister.

“Never have so few cheated on so many votes for such miserable reasons,” former Gantz ally Yair Lapid, poised to become opposition leader, tweeted Thursday.

While Israeli law bars ministers from serving while under indictment, there is no such law for prime ministers.

Netanyahu legally has until midnight (2100 GMT Thursday) to send Israeli president Reuven Rivlin a formal request that he be authorized to form a government, signed by at least 61 of parliament’s 120 members.

He will then have a short period to wrap up weeks of bickering about the allocation of ministerial posts and finalize his cabinet line-up.

Yohanan Plesner, president of the Israel Democracy Institute think tank, said neither Gantz nor Netanyahu had faith in the other’s intentions.

“There is zero trust -– this is probably the main characteristic of this political agreement,” he told journalists.

“Therefore a new regime was created whereby we have two prime ministers, both with veto power on the agenda of the government.”

In its first months the government will focus on the COVID-19 response.

The country took rapid measures to lock down and has succeeded in limiting the death toll so far to just over 200, in a population of some 9 million.

In recent days measures have begun to be eased, with shops and businesses partially reopening, as well as primary schools.

From July 1, the government can also decide whether to follow through with the annexation of Israeli settlements in the West Bank, after President Donald Trump gave US blessing for the move, which the United Nations says violates international law.

Israel could also annex the Jordan Valley, another region Trump says he is ready to recognize as part of its sovereign territory.

Either move is liable to trigger Palestinian unrest across the West Bank as well as in the Gaza Strip.

The Palestinians see the West Bank as the mainstay of their future state and the United Nations has warned that annexation would seriously damage any hopes for lasting peace.

Plesner said if Democratic candidate Joe Biden were to beat Trump in November’s election he would likely oppose annexation, taking the idea “off the table.”

As such, he added, the government will have a “short window of opportunity (for annexation) between July and the US elections in November.” – Rappler.com