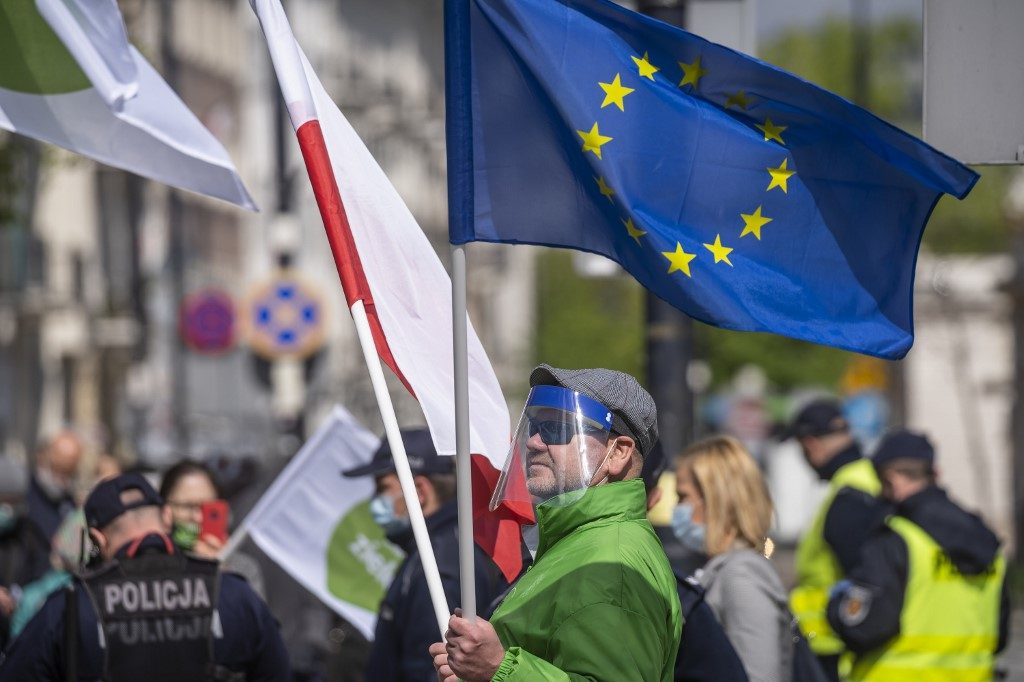 Facebook Twitter Copy URL
Copied
The moves come amid a chaotic week during which voters were left in the dark over whether they would be able to cast ballots in a presidential election scheduled for Sunday, May 10

WARSAW, Poland – Poland’s parliament on Thursday, May 7, voted to allow a presidential election delayed due to the coronavirus pandemic to go ahead via a postal ballot, triggering opposition and EU concern over democratic standards.

The moves came amid a chaotic week during which voters were left in the dark over whether they would be able to cast ballots in a presidential election scheduled for Sunday, May 10.

The right-wing Law and Justice (PiS) government had initially stuck to the May 10 poll date despite opposition calls for a delay over worries that a free, fair and safe election was impossible during the coronavirus lockdown.

In a last-minute delay, the PiS and a key coalition partner agreed late on Wednesday, May 6, to postpone the election. The PiS then managed on Thursday shore up opposition within its own ranks and push through the controversial postal ballot.

Opinion polls suggest that PiS-allied incumbent President Andrzej Duda could capture more than 50% of the vote for a first-round victory in May. Analysts said the prospect had made PiS leaders push hard for an election this month.

Although a new election date was not immediately set, PiS deputy prime minister Jacek Sasin told local media on Thursday the ballot could take place as soon as June.

The EU’s top justice official Didier Reynders warned Thursday in Brussels that the adoption of a postal ballot “raised questions about the ability of all Poles, including those abroad, to take part.”

“There has not been a true open campaign,” he added.

The postal ballot gave rise to doubts about data protection, he said, “since clearly there have been requests to the Polish postal service for personal data to prepare the election.”

Reynders said that if the election is delayed long enough, “there is no reason the vote cannot take place physically in polling stations.”

Poland’s centrist and leftist opposition parties have rejected a postal ballot, insisting it could open the door to election fraud.

Borys Budka, leader of the centrist Civic Platform main opposition party, accused the government of “failing” to keep their promise to guarantee “equal, free and universal elections and instead providing (voters with) a postal service.”

“All of this has led to the most serious crisis we have had since 1989,” Biedron said, referring to the breakthrough year when Poland transitioned from communism to democracy.

Warsaw-based political scientist Stanislaw Mocek pointed to “several violations of the constitutional order” in the PiS’s handing of the election.

Powerful PiS party leader Jaroslaw Kaczynski and his coalition ally Jaroslaw Gowin effectively postponed the May 10 election themselves, announcing late Wednesday they expected the Supreme Court to declare it null and void due to the pandemic.

The PiS government “should have declared a natural disaster to lawfully postpone the election,” Mocek told Agence France-Presse, adding that “now we’re in a fog of legal absurdity.”

The PiS rejected opposition calls to declare a disaster or emergency over the pandemic that would automatically postpone the election.

Declaring a state of disaster is the only “lawful way to postpone” a presidential election, the Helsinki Foundation for Human Rights said in a Thursday statement.

The election uncertainty has underscored long-standing EU concerns about democratic standards in Poland.

Last week the European Commission launched its fourth infringement procedure against PiS-authored judicial reforms, which it says test the rule of law by undermining judicial independence.

Commissioner Vera Jourova also appeared to caution the PiS government over its handling of the presidential election.

“We cannot compromise or put in lockdown our fundamental rights and values,” Jourova said.

“The virus must not kill democracy.” – Rappler.com