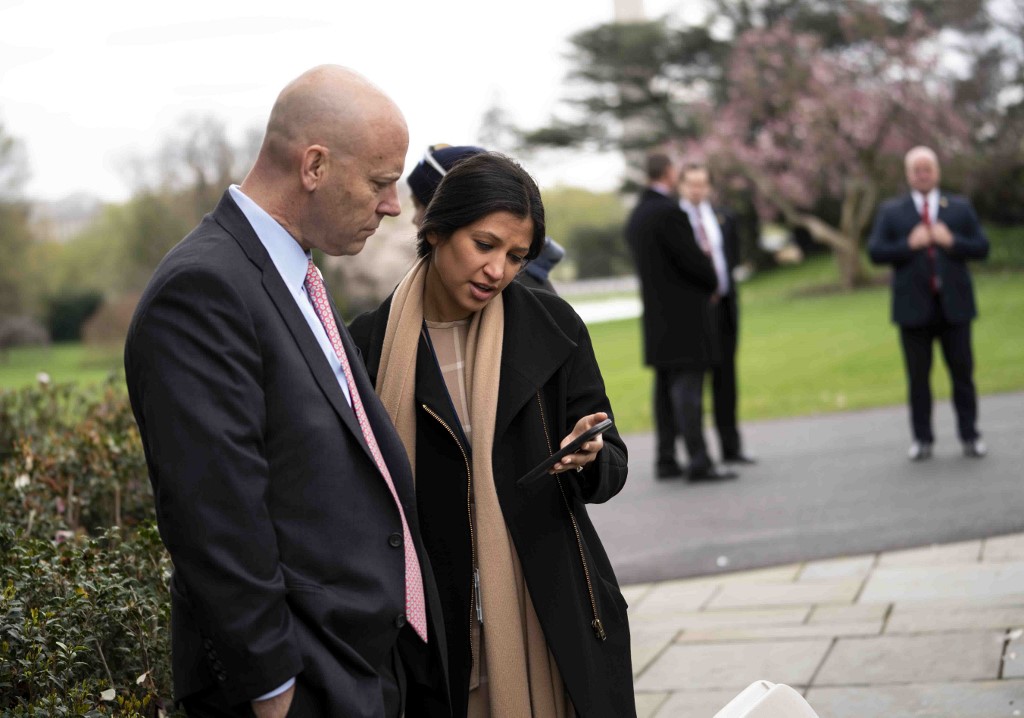 WASHINGTON DC, USA – The US vice president’s spokeswoman became the second White House staffer this week to test positive for the coronavirus, officials said Friday, even as President Donald Trump continued to go mask-free at a World War II commemoration with veterans in their 90s.

News that staffer Katie Miller had fallen ill boosted fears that the White House is at risk of becoming a viral hot spot just when Trump is leading efforts to wind down nationwide quarantine measures that have devastated the world’s biggest economy.

A senior administration official initially said only that a member of Pence’s staff had been tested and found to have the coronavirus.

Trump, speaking later at an event with Republican lawmakers, identified the person as “Katie,” saying she works with Pence as a “press person.” This confirmed multiple US media reports that Katie Miller was the person in question.

On Friday, Miller thanked people for their well wishes, and in a tweet said: “I’m doing well and look forward to getting back to work for the American people.”

As recently as Thursday, Miller was seen mingling with officials at an outdoor prayer ceremony hosted by Trump and attended by dozens of people, including the wives of Trump and Pence and many senior staff.

Miller’s positive test disrupted a trip by Pence to Des Moines, Iowa, with 6 people who may have had contact with her made to get off the airplane.

“Out of abundance of caution we went back and looked into all the person’s contacts most recently,” said the senior administration official, who asked not to be named.

On Thursday, a Trump spokesman said the president’s valet, a member of the military who is in close contact with the president, had tested positive.

Trump and Pence were tested and confirmed to be negative. Both are tested daily.

The latest scare came as Trump is pressing for a quicker reopening of the US economy, which has been hammered by the fallout from mass lockdowns and social distancing.

White House press secretary Kayleigh McEnany said there was no risk of a White House outbreak or threat to Trump.

“I can just tell you that we’ve taken every single precaution to protect the president,” she told a press briefing. “We clean the facility, we social distance, we keep people 6 feet away from each other.”

Trump has drawn criticism for refusing to follow his own health experts’ advice on wearing a mask in public. Although wearing a face covering is voluntary, it is recommended by many state authorities and federal doctors.

Few of Trump’s staff are ever seen wearing masks.

Trump’s latest public outing was to a ceremony early Friday marking the 75th anniversary of the Allied victory over Nazi Germany in World War II.

The president, who at 73 is well within the higher-risk group for COVID-19, met 8 American veterans ranging in age from 96 to 100. Neither he nor the veterans wore masks, although he kept a few steps from them.

“I was very far away from (the veterans),” Trump told journalists. “Plus the wind was blowing so hard in such a direction that if the plague ever reached them, I’d be very surprised.”

Earlier this week, Trump made his first long-distance trip since the nation’s coronavirus lockdown began, visiting a Honeywell mask-making factory in Arizona.

Again, he did not wear a mask in public, even while addressing a room full of factory employees, all wearing masks in accordance with company policy. – Rappler.com