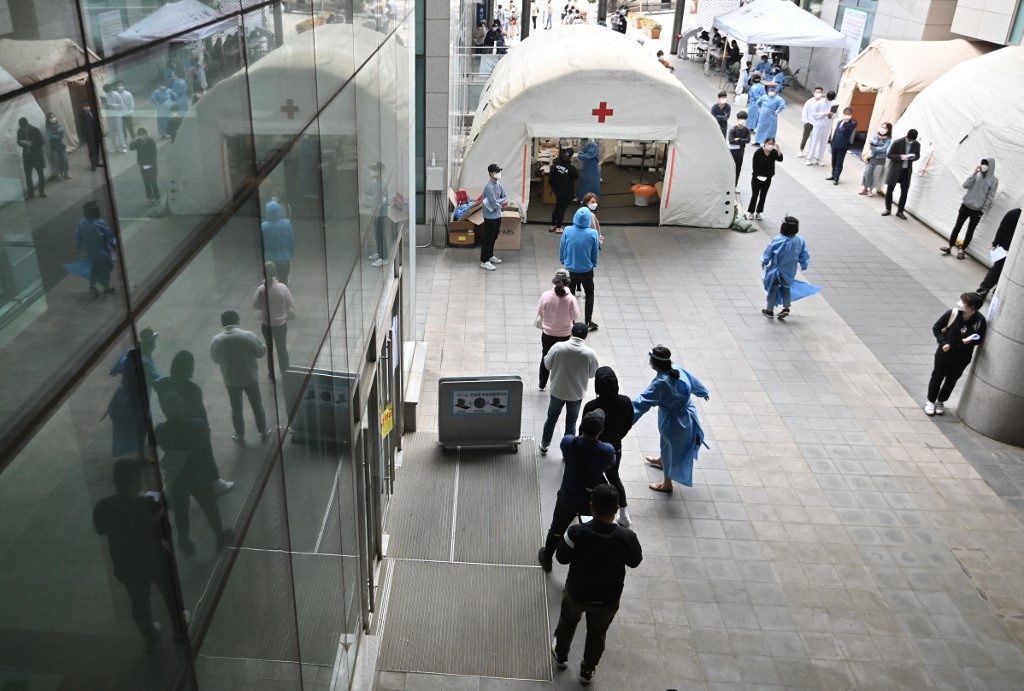 Facebook Twitter Copy URL
Copied
The spike of new cases, driven by the cluster in venues in Seoul's Itaewon district forces authorities to delay this week's planned re-opening of schools

SEOUL, South Korea – South Korean authorities said on Tuesday, May 12, they were using mobile phone data to trace Seoul nightclub visitors as they try to tackle a coronavirus cluster, promising anonymity to those being tested due to the stigma surrounding homosexuality.

The country has been held up as a global model in how to curb the virus, but a spike of new cases, driven by the cluster in venues in Seoul’s Itaewon district – including several gay clubs – forced authorities to delay this week’s planned re-opening of schools.

Many nightclub customers are believed to be reluctant to come forward because of the stigma surrounding homosexuality in the socially conservative country.

Seoul, as well as its neighbouring Gyeonggi province and the nearby city of Incheon, and the southern city of Daegu, have ordered the closure of all clubs and bars.

South Korea’s reaction to the initial coronavirus outbreak was widely praised, and its handling of this latest spike will be closely watched as parts of Europe begin a cautious re-opening.

Health experts are warning that moving too quickly will result in a surge in infection numbers.

Officials in the east Asian nation of 52 million reported 27 new cases Monday, taking its total to 10,936, after recording only single-digit increases for eight of the preceding 13 days – many of them overseas arrivals.

As of Tuesday morning, 101 cases had been linked to the Itaewon cluster, Seoul mayor Park Won-soon told reporters.

The city secured a list of 10,905 people who visited the district through data provided by mobile operators and has sent text messages asking them to get tested, he added.

The Korea Disaster Management Headquarters said nearly 2,000 people who are believed to have visited the clubs are currently unreachable, and thousands of police will be deployed to track them down.

“The National Police Agency has established an operation system with 8,559 officers… to track down who cannot be identified through credit card information or data provided by mobile operators,” said Yoon Tae-ho, the director of KDMH.

More than 7,000 people who have visited the area over the past two weeks have been tested, said Mayor Park – who on Monday announced a 2 million won ($1,630) fine for those who avoid testing.

“The fight against infectious diseases is a speed battle,” Park told reporters, adding the city will collaborate with human rights organisations to prevent possible privacy infringements.

“We encourage you to get tested as soon as possible without worrying about your safety,” he added. – Rappler.com