May 14, 2020 11:43 PM PHT
Agence France-Presse
Facebook Twitter Copy URL
Copied
Benjamin Netanyahu asks his ally-turned-rival Benny Gantz to postpone the swearing in until Sunday, May 17, so he can finalize cabinet assignments among members of his right-wing Likud party 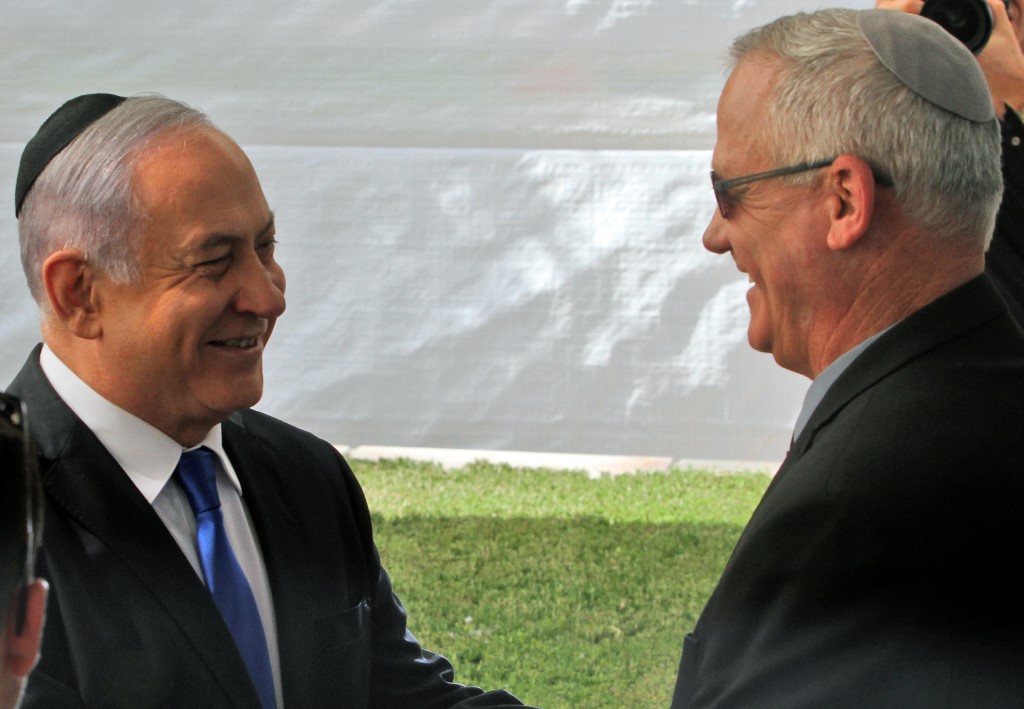 JERUSALEM – Israel postponed the swearing in of its unity government, which had been set for Thursday, May 14, following a request for a three-day delay by Prime Minister Benjamin Netanyahu.

Netanyahu asked his ally-turned-rival Benny Gantz to postpone the swearing in until Sunday, May 17, so he could finalize cabinet assignments among members of his right-wing Likud party, said a statement from Likud and Gantz’s centrist Blue and White political alliance.

Netanyahu and former military chief Gantz agreed to a three-year coalition government last month, after more than 500 days of political deadlock and 3 inconclusive elections in less than a year.

Through the 3 weeks since the pact was signed, leaders from various parties have haggled for key positions.

In a letter sent to President Reuven Rivlin late Wednesday, May 13, Netanyahu, in power since 2009, announced he had formed a government.

Under the coalition deal, Netanyahu will serve as prime minister for the coming 18 months, a victory for a leader due to stand trial from May 24 on corruption charges, which he denies.

Gantz will be alternate prime minister – a new position in Israeli governance – for the first half of the deal, before he and Netanyahu swap roles.

Pro-Netanyahu paper Israel Hayom wrote Thursday that the premier had signed off on his own “expiration date” after the longest tenure as prime minister in Israeli history.

The 35th government since Israel’s creation in 1948 includes representatives from across the political spectrum.

Cabinet posts have been assigned to the left-wing Labour party, Blue and White, Likud and leaders from conservative ultra-Orthodox Jewish parties.

Writing in the Yediot Aharonot newspaper, political columnist Ben-Dror Yemini said the coalition was “inflated” and “wasteful,” pointing to the record 34 cabinet seats, a number that could grow to 36.

“It’s unclear if (the government) has any ideology,” he said. “It is all about seats.”

The large cabinet, along with additional funds to accommodate the new position of alternate prime minister, have prompted criticism as Israel seeks to rehabilitate an economy brutalized by the coronavirus pandemic.

While the country has lifted many lockdown restrictions as transmission rates have fallen in recent weeks, rampant unemployment caused by the pandemic remains an urgent concern.

Policy “guidelines” submitted by Netanyahu on Wednesday said the new government will build “a plan to exit the deep economic crisis.”

The Netanyahu-Gantz deal says the government can from July 1 initiate moves to implement US President Donald Trump’s controversial peace plan for the Israeli-Palestinian conflict.

The plan, categorically rejected by the Palestinians, gives the green light from Washington for Israel to annex Jewish settlements and other strategic territory in the occupied West Bank.

Such moves by Israel will likely cause international uproar and risk inflaming tensions in the restive West Bank, home to nearly 3 million Palestinians and some 400,000 Israelis living in settlements considered illegal under international law.

Renewed West Bank violence has left 3 people dead in as many days.

A Palestinian attacker who rammed his car into Israeli soldiers near Hebron was shot dead by troops on Thursday, a day after an Israeli killed a 15-year-old Palestinian, also near Hebron, as the army was suppressing riots.

A Palestinian stone-thrower killed an Israeli soldier on Tuesday, May 12, during an arrest operation near Jenin, the army’s first fatality of the year.

The government’s guidelines make no mention of annexation plans, but commit it to “strengthen national security and to strive for peace.”

Bennett, a hardline promoter of annexation and the expansion of West Bank settlements, will be replaced by Gantz at the defense ministry.

Jordan’s Foreign Minister Ayman Safadi said Wednesday that “any Israeli decision to annex the settlements, the Jordan Valley and the north of the Dead Sea in occupied Palestine will be a disastrous step.”

In a phone conversation with Spain’s foreign minister, Safadi warned that it would “kill chances for a just peace and push the region towards more conflict.” – Rappler.com