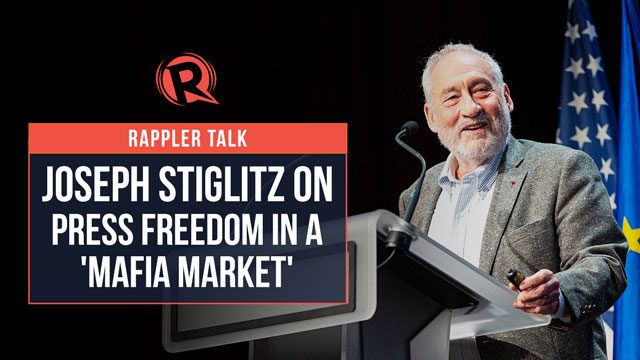 Manila and New York – In an interview with Maria Ressa, Nobel laureate Joseph E. Stiglitz talked about the press freedom issues that are expected to define journalism’s next ten years.

Stiglitz said press freedom today has come to mean more than just the classical right to tell and the ability to publish. It encompasses other more complex issues, such as disinformation, access to information, and sustainable business models that protect journalistic independence.

Similarly, the RSF report highlighted five threats to journalism’s future. The world has seen a rise of authoritarian regimes, which suppress information, pluralism, and independent journalism. But even democracies are in crisis as politics becomes more polarized, and democratically elected leaders encourage hostility and hatred towards journalists.

A crisis of trust of the media further undermines journalism and news, while the lack of appropriate regulations for global digital communication platforms has led to a technological crisis that amplifies the spread of disinformation and ‘fake news.’

Media and journalism also face an existential, economic crisis that threatens the survival of even large, established news organizations.

Characterized by the dominance of social media and other digital communication platforms, the ‘new news ecology’ was at first widely celebrated for its democratizing features. But as tech platforms consolidated power, the information and news ecology became more asymmetrical – unable to balance the abuses of a largely unregulated industry.

“In many ways, those with more money have the ability to distort this marketplace,” said Stiglitz. “How can you compete with people who can hire bots to disseminate disinformation, misinformation if you’re trying to put forward honest views about what is happening? So we’ve created a peculiar wild west of an under-regulated information marketplace. It’s not a market, it’s a mafia market – where money and thuggery play too big of a role.”

In order to address the problems faced by media and journalism today, Stiglitz stressed the need for appropriate regulation of tech and digital communication platforms, which serve as venues for the spread of disinformation and harassment of journalists.

Governments have typically struggled to regulate and hold accountable internet and tech giants, partly due to the pace at which the tech industry changes and grows.

“Even if the constitution talks about freedom of speech, freedom of press, there’s no right to virality, no right to engage in these social harms,” said Stiglitz. “And how we balance benefits and the cost is a question that our democracies will have to debate. But what is clear is we have not yet done it right.”

In addition to a better regulatory framework, Stiglitz also advocated for public support for independent media. Today, public support for media can take the form of media license fees – such as in the UK, Switzerland, Denmark and Germany – and indirect and direct press subsidies.

“I believe that access to accurate news, to information, to knowledge is a fundamental public good,” said Stiglitz. “And as a public good, it has to be publicly supported.”

To fund public support for media, Stiglitz also proposed a tax on internet and tech companies.

“The platforms have generated enormous amounts of money at low margin of cost, high ability to raise revenue, devastating effects on the rest of the media,” he said. “If we tax them, use some of that revenue to create a better information/knowledge ecology, I think we can make inroads in trying to recreate a kind of informed marketplace of ideas.”