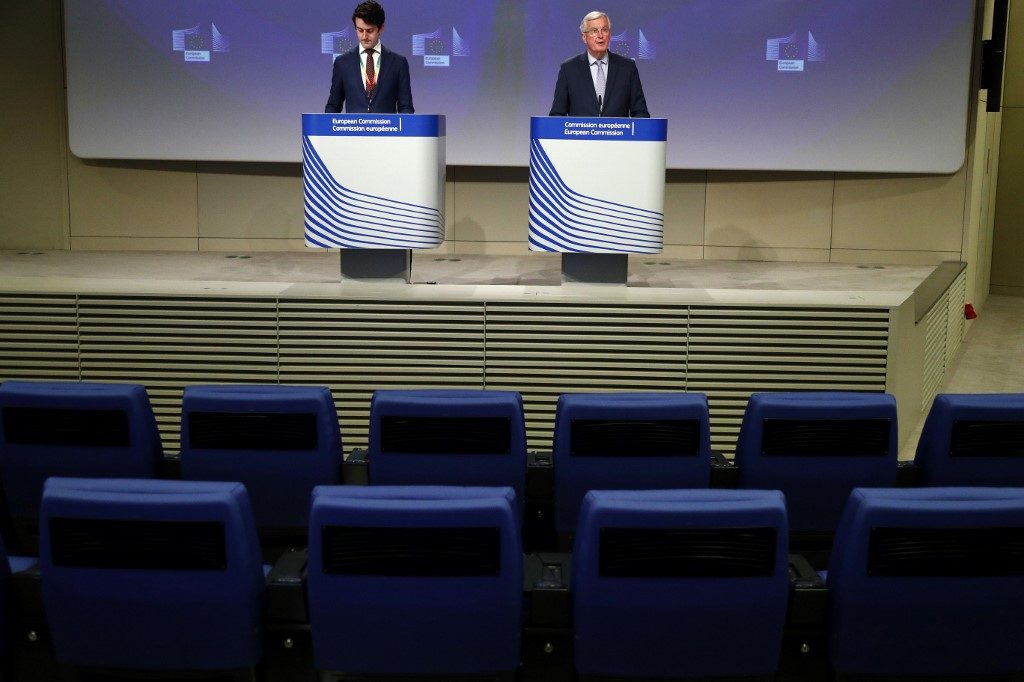 Facebook Twitter Copy URL
Copied
EU negotiator Michel Barnier says 'no progress has been possible on the more difficult subjects,' despite Britain now having provided suggested texts in almost all areas of disagreement

BRUSSELS, Belgium – The European Union (EU) and Britain ended their latest round of post-Brexit trade talks in a state of deadlock on Friday, May 15, with both sides urging the other to fundamentally change its strategy.

EU negotiator Michel Barnier said he was “disappointed” by Britain’s lack of ambition – but also accused London of seeking the benefits of single market access without its responsibilities.

In London, at the end of a week of haggling by videoconference, Barnier’s UK counterpart David Frost agreed that not a lot had been achieved.

Barnier said “no progress has been possible on the more difficult subjects,” despite Britain now having provided suggested texts in almost all areas of disagreement.

Britain left the European Union on January 31 and the sides have until the end of the year to agree a new basis for ties, barring an extension that British Prime Minister Boris Johnson has repeatedly ruled out.

There now remains only one round of talks before an end of June deadline to decide whether talks are worth continuing.

“It is hard to understand why the EU insists on an ideological approach which makes it more difficult to reach a mutually beneficial agreement,” Frost said after the talks.

“We very much need a change in EU approach for the next round beginning on June 1,” he added.

The talks have stumbled on the same issues since they launched in March, just ahead of the coronavirus pandemic that has paralyzed public life and devastated the European and UK economies.

“We’re treading water… There really is no progress and tempers picked up a bit more this session,” said one European source close to discussions.

The EU insists any deal must include binding UK commitments to maintain EU standards on health, safety, state aid and the environment – commonly known as keeping the “level playing field.”

“We are not going to bargain away our European values to the benefit of the British economy. Economic and trade fair play is not for sale. It is not a ‘nice to have’, it is a ‘must have’,” Barnier declared.

But Britain refuses to accept that this should form part of an overarching legal agreement, insisting on its new found freedom after the 40 years of being tied to EU rules.

“As soon as the EU recognizes that we will not conclude an agreement on that basis we will be able to make progress,” Frost said.

Barnier countered: “The United Kingdom has not engaged in a real discussion on the level playing field, whatever it says.”

Britain insists it wants nothing more in its trade deal than the EU offers other partners such as Canada or Japan – while Barnier says it is in fact asking for much more.

“There isn’t a halfway house, you can’t split the difference between where we control our own laws and where we don’t,” a UK official official told reporters on condition of anonymity.

The Europeans argue that Britain’s geographic proximity and close business connections to the continent make more safeguards necessary than those in a traditional trade deal.

But Frost and Barnier both said there were “useful discussions” on another bone of contention – fisheries – even if both sides remain fundamentally far apart.

Spurred on by France, Brussels is taking a tough stance on fishing rights, with demands that European vessels keep much the same access to British waters despite Brexit.

Frost said the EU focus on full access to British waters was “incompatible with our future status as an independent coastal state.”

Without a deal, Britain and the EU devolve ties into WTO rules, creating barriers to trade that would rock both economies.

The EU believes that the pain will be felt much more by Britain, but the devastating economic effects of the coronavirus have raised hopes in some quarters that London and Brussels will compromise to avoid further chaos. – Rappler.com