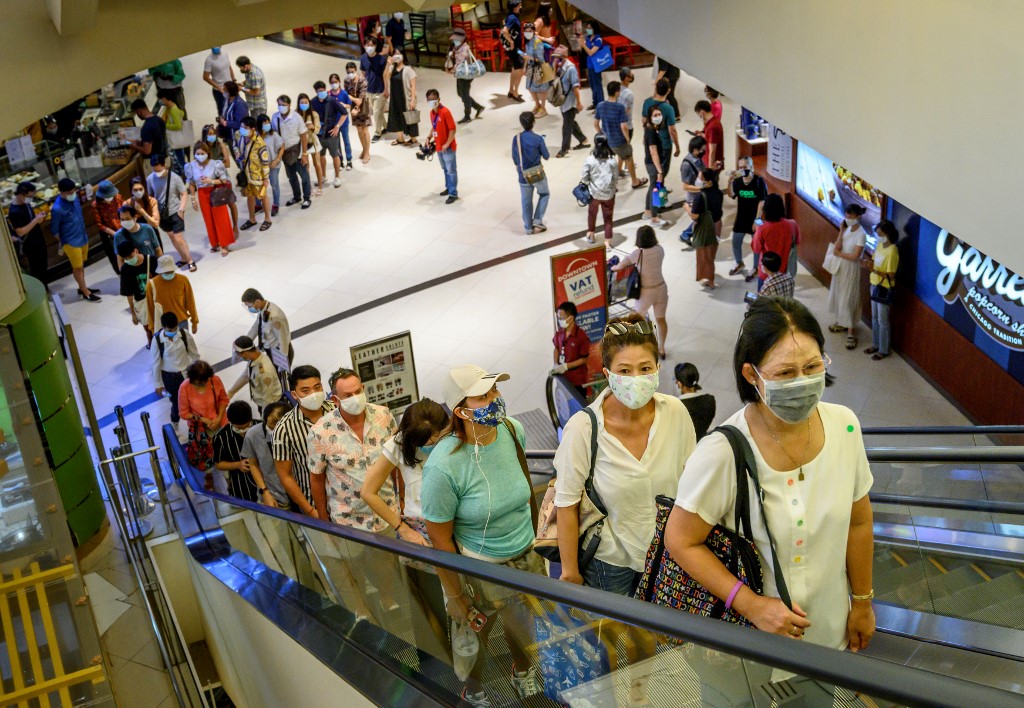 BANGKOK, Thailand – Shoppers flocked to Thailand’s top-end malls on Sunday, May 17, eager for retail therapy as shopping centers reopened in a gradual easing of restrictions to revive the virus-ravaged economy.

Hundreds of masked customers passed through temperature checks, disinfection stations, and had their photos taken before they were allowed into plush malls in Bangkok.

In the main downtown shopping district, Central World touted a “new normal” of doing business on posters, while screens on the mall’s exterior declared “We are open.”

The shopping center relaunch comes with Thailand’s infection numbers slowing in recent weeks – authorities announced 3 new cases on Sunday, with the total at just over 3,000.

Shopper Taewich Penpattakul said he was “not really worried” about contracting COVID-19 because of Thailand’s low caseload.

“Mentally, it makes me feel better that all the malls are now opened,” the 23-year-old told Agence France-Presse.

Customers and businesses were advised to adhere to restrictions, which include limits on the number of people allowed in retail spaces and a ban on alcohol sales in restaurants. Cinemas, however, remain closed.

The food court – often the most popular part of Thai shopping centers – filled up quickly, and a mobile robot roamed around monitoring people’s temperatures.

Tables had plastic dividers set up to encourage social distancing, while one restaurant placed cardboard dinosaurs opposite customers to indicate the place was not to be used.

The government is also urging retailers and shoppers to check in on a digital platform when entering malls – it will send a message if a coronavirus case is discovered in a specific store.

“We would have to wait until a few weeks to see if this is a good idea and if they (the government) can still control COVID-19,” said Jason Noel, 25, who was eyeing up some purchases.

Shopping centers – along with other public spaces like stadiums, gyms and parks – were ordered to close in mid-March as Thailand entered a state of emergency to curb the spread of infections.

But retailers have felt the slump since January when an economic malaise settled over a kingdom heavily dependent on spending from Chinese tourists.

Thailand on Saturday extended a ban on inbound international flights until June 30.

Its economy is forecast to contract by more than 6 percent – the sharpest plunge since the crisis of 1997. – Rappler.com