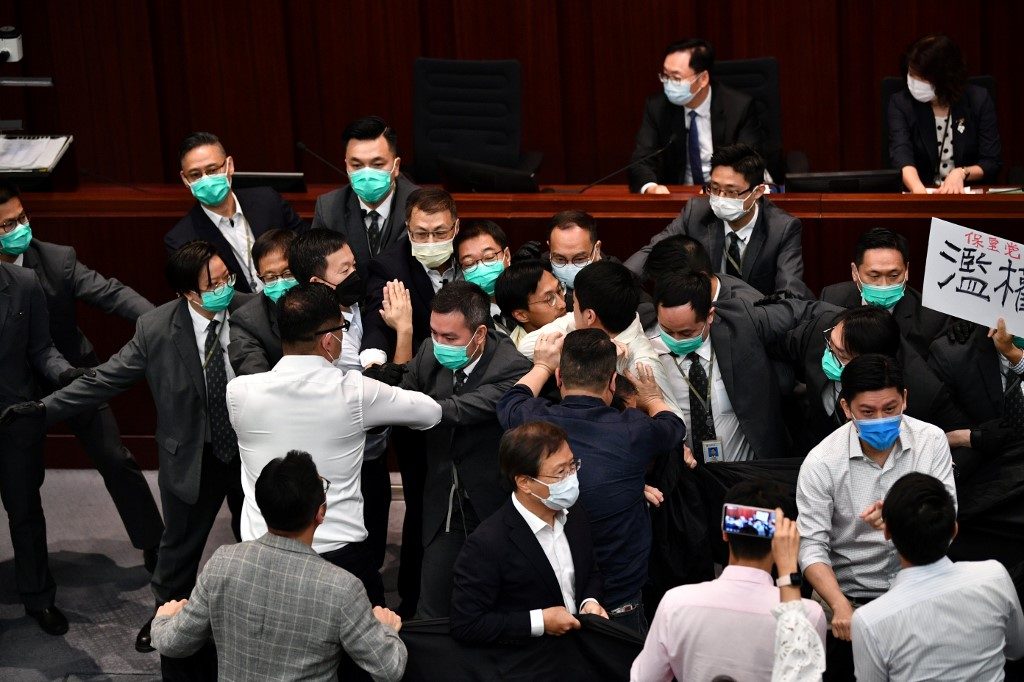 HONG KONG – Clashes broke out in Hong Kong’s legislature for the second time this month on Monday as the city’s pro-democracy camp tried to scupper a controversial law that bans insulting China’s national anthem.

Fighting erupted in the House Committee, a body that helps scrutinize bills, with protesting pro-democracy lawmakers dragged from the chamber by security guards and scuffles between rival camps flared up on the chamber floor.

The committee has been without a leader since October, meaning no bills have made it to the legislature for a vote, including one that criminalizes ridiculing or altering the national anthem. (READ: Rival camps clash in chaotic Hong Kong legislature)

Pro-democracy lawmakers have used filibustering and procedural delays to stop voting for a new chair. But in recent weeks pro-Beijing politicians have moved to break the stalemate.

On Monday, the pro-government camp installed its own stand-in to head the committee armed with external legal opinion saying they had the power to end the deadlock.

But the pro-democracy camp says the moves are illegal, citing the legal opinion of the legislature’s own lawyers.

During Monday’s scuffles, one pro-democracy lawmaker threw torn up pages of the legislature’s rulebook at his opponents. Others were wrestled out the chamber by suited security guards in facemasks and leather gloves.

The chaotic scenes are the latest expression of an entrenched political crisis engulfing Hong Kong.

Under a deal agreed with Britain before the city’s return to China, Hong Kong has a partially elected legislature and certain freedoms that are unseen on the authoritarian mainland until 2047.

It is administered by a pro-Beijing local government that is appointed, not popularly elected.

Calls for greater democracy have snowballed in recent years as fears rise that Beijing is prematurely eroding Hong Kong’s freedoms.

Millions hit the streets last year for seven months of pro-democracy rallies that often spun out into clashes between police and petrol bomb wielding protesters.

Those protests were initially sparked by another controversial bill that would have allowed extraditions to mainland China.

That bill, which was eventually withdrawn, also sparked fights in the legislature before the political unrest exploded onto the streets.

China’s leaders have dismissed popular anger in Hong Kong and instead portrayed last year’s protests as a foreign-sponsored plot to destabilise the motherland.

Beijing has made clear it wants new security legislation passed after last year’s unrest, including an anti-sedition law, the national anthem bill — and more patriotic education in schools.

Democracy supporters say such moves ride roughshod over the wishes of most Hong Kongers and have warned it will spark new outbreaks of unrest.

Small protests have already begun bubbling up after four months of calm imposed by mass arrests and the coronavirus as social distancing measures begin to ease.

Hong Kong’s local government began the new year vowing the heal divisions but has made little attempt at reconciliation. – Rappler.com