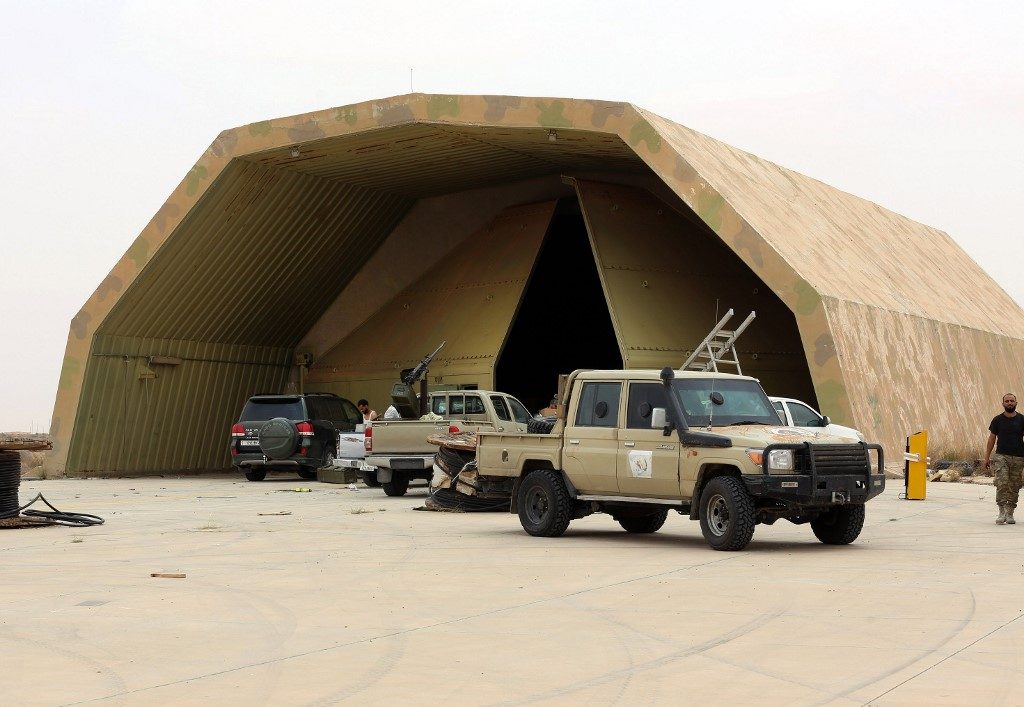 Facebook Twitter Copy URL
Copied
The reported capture of Al-Watiya comes after a weeks-long siege by pro-Government of National Accord forces of the base, where Khalifa Haftar had stationed aircraft for bombing runs against his rivals

TRIPOLI, Libya – Libya’s UN-recognized government scored another battlefield victory Monday, May 18, against strongman Khalifa Haftar, capturing a key rear base used by his fighters in a conflict now in its second year.

Haftar, who controls swathes of eastern Libya, launched an offensive in April last year against the capital Tripoli, seat of the UN-recognized Government of National Accord (GNA).

On Monday, the GNA said its forces had seized the strategic Al-Watiya airbase southwest of Tripoli, representing the latest in a string of setbacks suffered by Haftar’s camp in recent weeks, including the loss of two key western coastal cities in April.

“We proudly announce the liberation of Al-Watiya base,” 140 kilometers (90 miles) southwest of Tripoli, said Fayez al-Sarraj, the head of the GNA, in a statement.

The reported capture of Al-Watiya comes after a weeks-long siege by pro-GNA forces of the base, where Haftar had stationed aircraft for bombing runs against his rivals.

There was no immediate confirmation from the Haftar camp.

But Wolfram Lacher, a senior associate at the German Institute for International and Security Affairs in Berlin, said a withdrawal of Haftar fighters from Al-Watiya would ease pressure on GNA forces.

In recent weeks pro-GNA forces had stepped up air strikes against Haftar’s fighters, targeting their supply lines around Al-Watiya.

“Today’s success is not the end of the battle but it brings us closer than ever to victory when all cities and regions will be liberated and the tyrannical bid threatening democracy (is) crushed,” Sarraj said.

The conflict pitting Haftar against the GNA has been exacerbated by foreign military intervention.

The United Arab Emirates and Russia back the eastern-based strongman while Turkey supplies the unity government.

Prior to seizing Al-Watiya, GNA forces pounded it from the air using drones supplied by Turkey, while also bombarding the town of Tarhuna.

GNA forces spokesman Mohamad Gnounou said loyalists had destroyed three Russian-made anti-aircraft systems in the airbase since Sunday, May 17, before the missile defences could be deployed by Haftar’s forces.

According to the GNA, these systems were provided to Haftar by the United Arab Emirates.

GNA commander Mohamad Gammoudi said the final attack on Al-Watiya was launched at dawn Monday, with air support, in a context where the base was surrounded on three fronts.

“We did not meet with much resistance. A few armoured vehicles tried to slow down our advance while providing cover for retreating Haftar militiamen,” he added.

Haftar’s forces had occupied Al-Watiya since 2014, and used it as a launchpad for air attacks on GNA positions.

But according to military sources all his aircraft have been destroyed in battle for Tripoli.

Lacher said the capture of the base “frees up GNA forces from western cities to move to frontlines south of Tripoli.

“It also strengthens the sense among anyone except Haftar’s true believers that his war is unwinnable,” he added.

The battle for Tripoli has left hundreds dead and displaced more than 200,000 people.

In January, world leaders committed to ending foreign meddling and to upholding a 2011 weapons embargo, but the UN has warned that both sides have continued to receive arms and fighters.

Libya has been in chaos since a 2011 NATO-backed uprising that ousted and killed veteran dictator Moamer Kadhafi. – Rappler.com