WASHINGTON – Actor George Clooney and several members of the US Congress were handcuffed and arrested Friday outside Sudan’s embassy as they demanded an end to an offensive they fear will cause thousands to starve.

Swarmed by flashing cameras and TV crews, Clooney led more than one dozen prominent campaigners and his father to the steps of Sudan’s mission in Washington’s Embassy Row and ignored three warnings by police to leave.

Officers escorted the “Descendants” star and the other campaigners in plastic handcuffs to police vans. Hundreds of supporters chanted slogans nearby against Sudan’s President Omar al-Bashir and hoisted banners reading, “Sudan: Stop Using Food as a Weapon.”

Clooney, a longtime activist for human rights in Sudan, was released three hours later after paying a $100 fine for crossing a police line.

The actor paid a clandestine visit several days ago to Sudan’s South Kordofan, where aid groups say at least 250,000 people are at risk of imminent food shortages.

“Best estimate are tens of thousands of people are going to die from starvation that is manmade. This isn’t a famine, this is a manmade tragedy by the government of Khartoum to get these people to leave,” Clooney told reporters after his release.

Clooney joked that his brief jail stint was “really rough” and voiced hope that his celebrity helped throw a spotlight on South Kordofan. The rainy season begins in six weeks, meaning roads for potential aid will soon be impassable.

“We need humanitarian aid to be allowed into the Sudan before it becomes the worst humanitarian crisis in the world — immediately,” Clooney said to cheering supporters shortly before his arrest.

“The second thing we are here to ask is a very simple thing — it’s for the government in Khartoum to stop randomly killing its own innocent men, women and children,” he said.

“Stop raping them, and stop starving them. That’s all we ask,” he said. 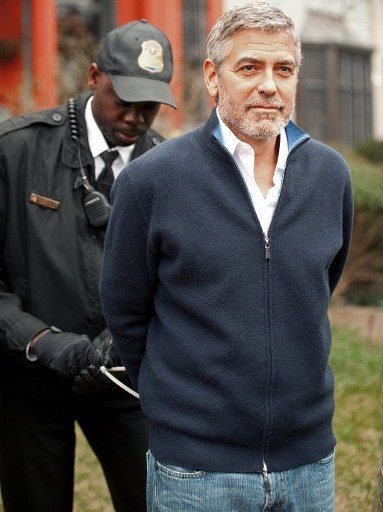 Clooney said he saw hundreds of people fleeing in terror to the hills and into caves in South Kordofan due to the constant buzzing of planes dropping bombs meant for insurgents but which frequently kill and maim civilians.

The conflict has severely impeded agriculture in the mountainous region, leading to fears of hunger. The United States has demanded that Sudan let in outside food shipments, but Khartoum is deeply suspicious of US intentions.

The protest was orderly, with some campaigners waiting patiently for police to bring another van. Inside Sudan’s embassy, one woman could be seen snapping a photo from the window before the Hollywood heartthrob was taken away.

Clooney‘s arrest quickly became one of the top topics on Twitter, often with the tongue-in-cheek hashtag #FreeClooney. Many Internet users hailed Clooney for his activism, while others quipped that he “looks hot even when arrested.”

Clooney earlier testified about Sudan before the US Senate and raised the issue with President Barack Obama, who invited the actor — and supporter — to a state dinner on Wednesday for British Prime Minister David Cameron.

Among others arrested outside the embassy included the actor’s father, 78-year-old journalist Nick Clooney, and four members of the House of Representatives — Al Green, Jim McGovern, Jim Moran and John Olver.

McGovern, a member of Obama’s Democratic Party from Massachusetts and co-chair of a congressional commission on human rights, said that the protest showed Sudan’s Bashir “that the world is watching.”

South Sudan became independent in July under a peace deal that ended two decades of war that left over two million dead, initially raising hopes overseas for a peaceful resolution to the country’s long-running conflicts.

But fresh violence broke out soon afterward in South Kordofan as the government fights insurgents tied to the former rebels who now rule South Sudan.

Bashir’s government has accused Western powers of seeking anew to divide the country, even though it accepted South Sudan’s secession. – Agence France-Presse