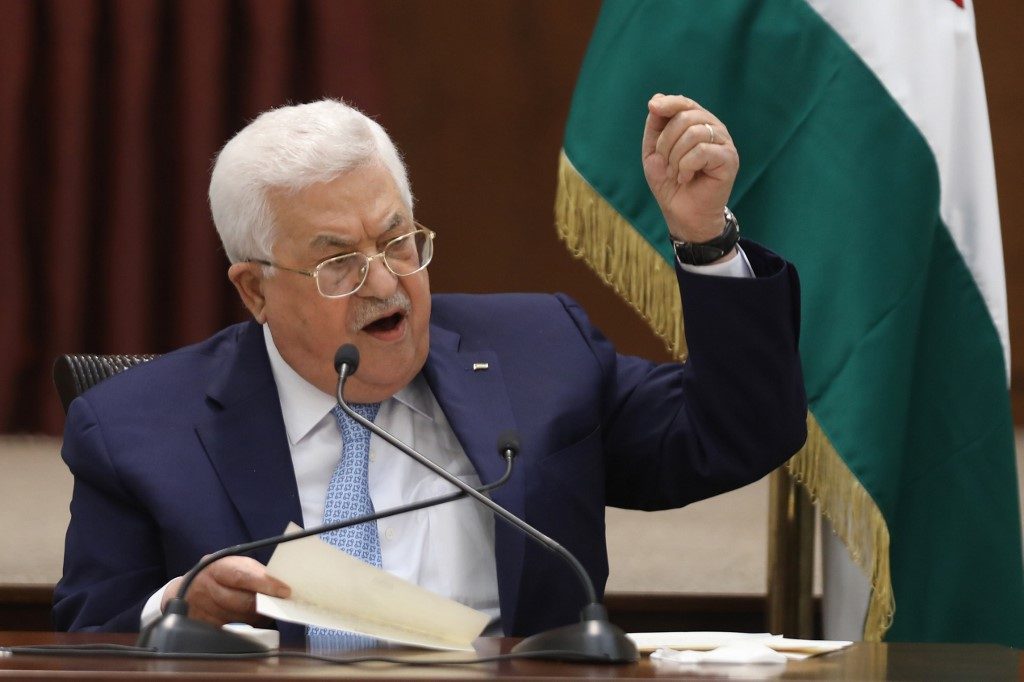 RAMALLAH, Palestinian Territories – Palestinian President Mahmud Abbas has warned that Israeli annexations in the occupied West Bank would spell the end of all security coordination, as international opposition to the plans grows.

US Democratic presidential nominee Joe Biden on Tuesday, May 19, became the latest high-profile figure to oppose Prime Minister Benjamin Netanyahu’s plan to apply Israeli sovereignty to Jewish settlements and the strategic Jordan Valley, which makes up around 30% of the West Bank.

Palestinians say any annexation would put an end to their hopes of an independent state alongside Israel, the so-called two-state solution.

In a speech late Tuesday, Abbas said the annexation plans showed Israel was no longer abiding by peace accords between the two.

Abbas did not go into detail about the implications of such a step, but it is his strongest card in a very weak hand as he seeks to pressure Israel to hold back.

Mahmoud Aloul, vice-president of Abbas’s Fatah party, told Agence France-Presse that implementation of the decisions would be finalized in the coming days but “as of last night all communications with the Israeli side, including security cooperation, were stopped.”

Abbas, 85, has been in power since 2005 and has made multiple previous threats to end security cooperation with Israel without ultimately following through.

A genuine end to such coordination could jeopardize the relative calm in the West Bank, where 2.7 million Palestinians live alongside more than 400,000 Israeli settlers.

Israel controls all access to the territory where Abbas’s government is based and even basic tasks require coordination between the two sides.

Abbas even needs coordination to travel from Ramallah, where the government is based, to any other Palestinian city.

Tareq Baconi of the International Crisis Group think-tank said the Palestinian leadership had provided little clarity about what ending security coordination would mean.

“The impact isn’t just freedom of movement, it is everything, even where food supply lines come from,” he said. “It can’t be dismantled overnight.”

In reality, he said, Abbas was seeking to build pressure on Israel to tone down annexation plans.

“We have been here before, many times. Abbas has yet to follow through, emptying such threats of any potential deterrence,” he said.

“Yet, as annexation looms his declaration should nonetheless be interpreted as one last desperate shot across the bow.”

Netanyahu has been emboldened by the staunch support of President Donald Trump, whose controversial peace plan released in January gave Israel US blessing to annex swathes of the West Bank.

But the Republican’s challenger in November’s presidential election, Biden, on Tuesday declared his opposition to annexation, saying it would undermine hopes for peace.

Under the coalition agreement Netanyahu signed with rival-turned-partner Benny Gantz, the two can bring annexation to cabinet for discussion from July 1.

King Abdullah II of Jordan, one of only two Arab states to have signed a peace deal with Israel, warned last week annexation would put Israel on course for a “massive conflict” with his country.

The European Union, Arab League and individual European governments have also come out in firm opposition to the annexation plans.

Yossi Beilin, an Israeli architect of the early 1990s Oslo peace accords with the Palestinians, said the cumulative effect of the EU and Arab League criticism, as well as statements by Biden, Abdullah and now Abbas, “will have an impact, in my view, on the Israeli government.”

“It might at least sharpen the internal debate between the two main parties.” – Rappler.com