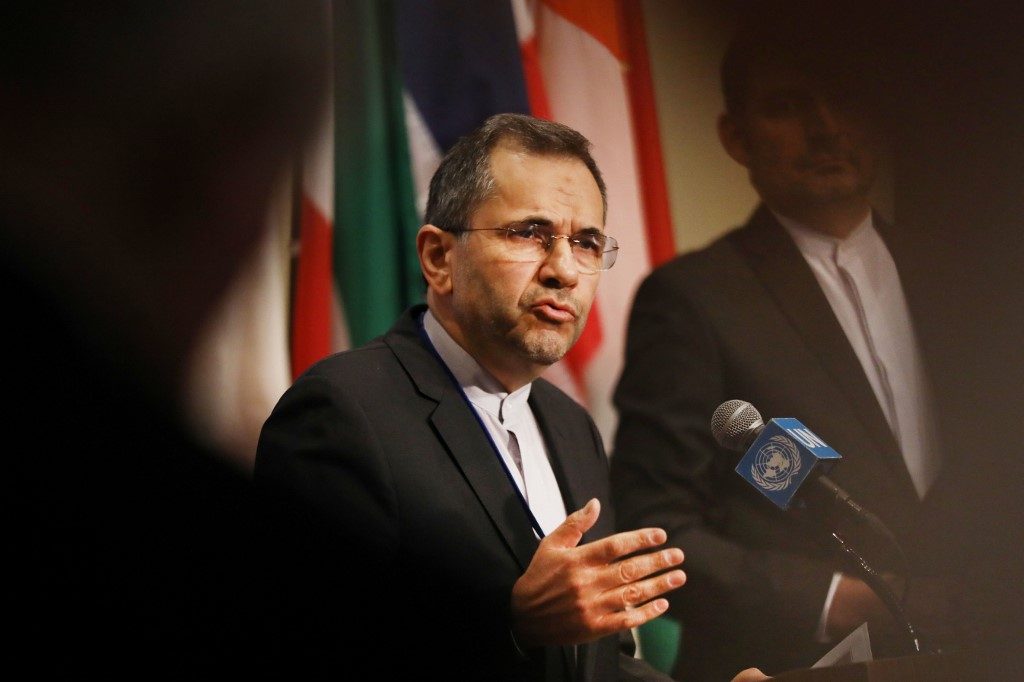 Facebook Twitter Copy URL
Copied
Iran's ambassador to the United Nations says that with the move, US Secretary of State Mike Pompeo is pulling the 'final plug' on the nuclear deal after President Donald Trump withdrew the US from it in 2018

TEHRAN, Iran – Tehran on Thursday, May 28, dismissed the impact of what it called Washington’s “desperate attempt” to end sanction waivers for nations that remain in the Iran nuclear accord.

The Atomic Energy Organization of Iran said the United States had made the move in a bid “to distract public opinion from its continued defeats at the hands of Iran.”

“Ending waivers for nuclear cooperation with Iran… has effectively no impact on Iran’s continued work” on what the Islamic republic insists is a purely civilian nuclear energy program, its spokesman Behrouz Kamalvandi added in a statement published on the agency’s website.

The US decision, he said, was in response to Iranian fuel shipments to Venezuela – which is also under US sanctions – and the “significant advancements of Iran’s nuclear industry.”

US Secretary of State Mike Pompeo said Wednesday, May 27, that the United States was responding to Iran’s “brinksmanship” – its scrapping of certain nuclear commitments aimed at pressuring Washington to remove sanctions as called for by the 2015 accord.

“These escalatory actions are unacceptable and I cannot justify renewing the waiver,” Pompeo said in a statement.

Iran’s ambassador to the United Nations said that with the move, Pompeo was pulling the “final plug” on the nuclear deal after President Donald Trump withdrew the US from it in 2018.

He was referring to Washington’s claim that it remains a participant in the deal, despite renouncing it, and can push to extend an arms embargo on Iran that is due to begin expiring in October.

The remaining parties to the deal known formally as the Joint Comprehensive Plan of Action, or JCPOA, include Britain, China, France, Germany and Russia.

In May 2019, Iran announced it was suspending nuclear commitments to the deal, starting with removing limits on its heavy water and enriched uranium stockpiles.

It was in retaliation for US sanctions and what Iran deemed Europe’s inaction to provide it with the JCPOA’s economic benefits.

Washington had until now issued waivers to allow companies, primarily from Russia, to keep carrying out the nuclear work of the agreement without risking legal ramifications in the US economy.

It will end waivers that allowed the modification of the heavy water reactor in Arak, which prevented it from using plutonium for military use, as well as the export of spent and scrap research reactor fuel.

Kamalvandi said ending the waivers would not impact Iran’s continued work on the Arak reactor and “other equipment” by Iranian experts. – Rappler.com