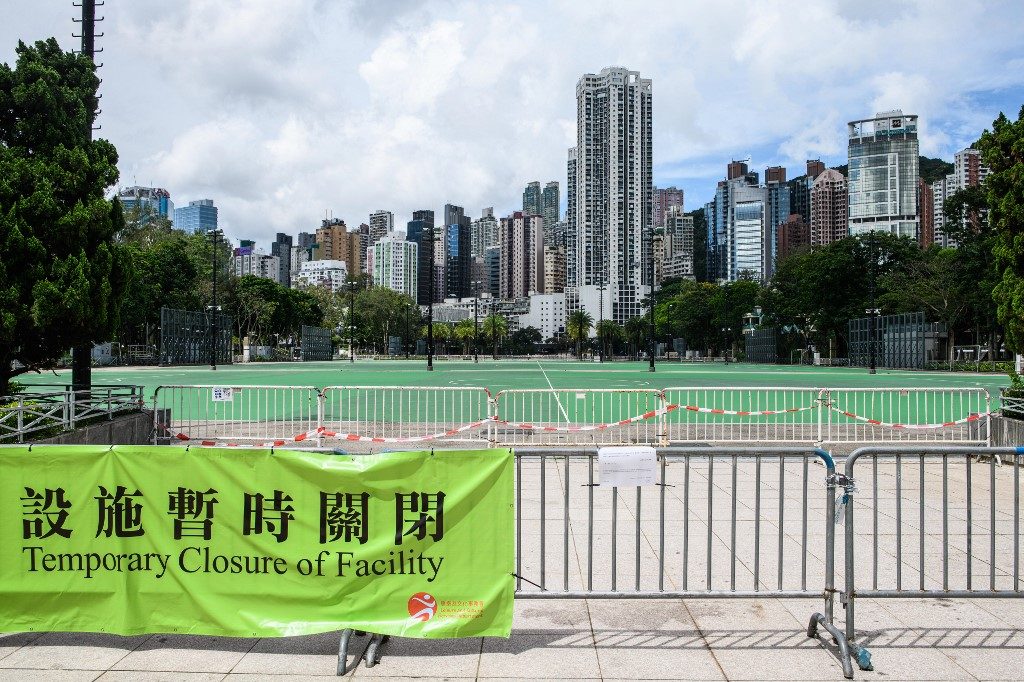 Facebook Twitter Copy URL
Copied
(UPDATED) This year's service is banned on public health grounds because of the coronavirus pandemic, with barricades surrounding Victoria Park, the traditional ceremony venue, and police patrolling nearby

Open discussion of the brutal suppression is forbidden in mainland China, where hundreds – by some estimates more than a thousand – died when the Communist Party sent tanks on June 4, 1989 to crush a student-led demonstration in Beijing calling for democratic reforms.

But the people of semi-autonomous Hong Kong have kept memories alive for the past 3 decades by holding a huge annual vigil, the only part of China where such mass displays of remembrance are possible.

This year’s service was banned on public health grounds because of the coronavirus pandemic with barricades surrounding Victoria Park, the traditional ceremony venue, and police patrolling nearby.

But organizers have called for residents to instead light candles of remembrance at 8 pm (1200 GMT) wherever they are.

“I don’t believe it’s because of the pandemic. I think it’s political suppression,” a 53-year-old man surnamed Wong, told Agence France-Presse (AFP) after kneeling by the park barricades to pay respects to the dead.

“I do worry that we may lose this vigil forever.”

Crowds have swelled at Hong Kong’s Tiananmen vigils whenever fears have spiked that Beijing is prematurely stamping out the city’s own cherished freedoms, an issue that has dominated the finance hub for the past 12 months. (READ: Outrage in Hong Kong as China pushes security law)

In response to those demonstrations last month Beijing announced plans to impose the security law, which would cover secession, subversion of state power, terrorism and foreign interference.

Opponents, including many Western nations, fear it will bring mainland-style political oppression to a business hub supposedly guaranteed freedoms and autonomy for 50 years after the 1997 handover from Britain.

But an American Chamber of Commerce survey this week said 83% of Hong Kong members were either very or moderately concerned about the law, while half were pessimistic about the city’s long term future.

Further inflaming tensions, Beijing wants another law that would punish insults towards China’s national anthem with up to 3 years in jail.

Hong Kong’s lawmakers are expected to vote on the anthem bill on Thursday afternoon but the debate was halted when an opposition lawmaker was ejected for throwing stagnant water on the floor in a Tiananmen protest.

With the Victoria Park vigil banned, Hong Kongers are organising locally and getting creative, chiefly with the scattered candle-light ceremonies.

But in mainland China, the crackdown is greeted by an information blackout, with censors scrubbing mentions of protests and dissidents often visited by police ahead of June 4.

Police in Beijing prevented an AFP photographer from entering Tiananmen Square to record the regular pre-dawn flag-raising ceremony on Thursday and ordered him to delete some photos.

The candle emoji has been unavailable in recent days on China’s Twitter-like Weibo platform.

The United States and Taiwan issued statements calling on China to atone for the deadly crackdown.

“Around the world, there are 365 days in a year. Yet in China, one of those days is purposely forgotten each year,” Taiwan’s President Tsai Ing-wen tweeted.

Secretary of State Mike Pompeo tweeted a photo of him meeting prominent Tiananmen survivors as US racial justice protests continue.

On Wednesday, June 3, China’s foreign ministry described calls for Beijing to apologize for the crackdown as “complete nonsense.”

“The great achievements since the founding of new China over the past 70 or so years fully demonstrates that the developmental path China has chosen is completely correct,” spokesman Zhao Lijian told reporters. – Rappler.com