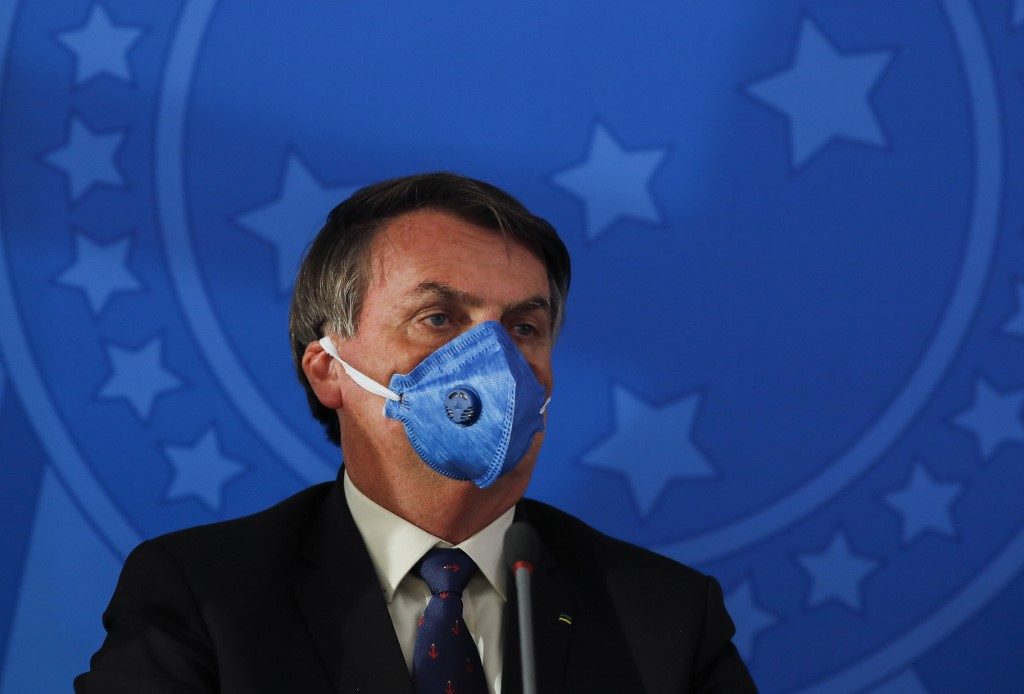 RIO DE JANEIRO, Brazil – President Jair Bolsonaro threatened on Friday, June 5, to pull Brazil from the WHO over “ideological bias,” as his counterpart Donald Trump said the US economy was recovering from the coronavirus pandemic and Europe sought to reopen its borders.

Adding fuel to the political fire raging around the pandemic, its origins and the best way to respond, Bolsonaro criticized the World Health Organization for suspending clinical trials of the drug hydroxychloroquine for COVID-19 – a decision it reversed this week – and threatened to follow in Trump’s footsteps by quitting.

“I’m telling you right now, the United States left the WHO, and we’re studying that, in the future. Either the WHO works without ideological bias, or we leave, too,” the far-right leader told journalists.

Sometimes called a “Tropical Trump,” Bolsonaro has followed a similar script to the US president in his handling of the pandemic, downplaying its severity, attacking state authorities’ stay-at-home measures and touting the purported effects of hydroxychloroquine and a related anti-malarial drug, chloroquine, against COVID-19.

The WHO had suspended trials of hydroxychloroquine after major studies raised concerns about its safety and effectiveness against the new coronavirus — irking Trump, a fan who even took the drug himself as a preventive measure.

On Thursday, most of the authors of the studies that appeared in The Lancet and the New England Journal of Medicine retracted their work, saying they could no longer vouch for their data because the firm that supplied it refused to be audited.

However, adding to the swirling scientific and political debate, a new study from Oxford University said Friday that hydroxychloroquine showed “no beneficial effect” in treating COVID-19.

In another potentially confusing reversal, the WHO changed its advice on face masks, saying that “in light of evolving evidence” they should be worn in places where the virus is widespread and physical distancing is difficult.

The new coronavirus has now killed more than 394,000 people and infected 6.7 million since it emerged in China late last year, the world’s worst health crisis in more than a century.

In the US – the hardest-hit country, with 109,000 dead and nearly 1.9 million infections – Trump said the economy was bouncing back after being pummeled by lockdown measures.

“We had the greatest economy in the history of the world. And that strength let us get through this horrible pandemic, largely through, I think we’re doing really well,” he told reporters.

Trump, who is facing a tough campaign for re-election in November, reiterated his calls to further ease stay-at-home measures, after surprisingly upbeat employment numbers showed the country gained 2.5 million jobs in May.

In a sign of the slow return to normal in the US, Universal Orlando became the first of the giant theme parks in sunny Florida to reopen — albeit with temperature controls at the entrance and mandatory face masks.

In Europe, badly-hit countries slowly continued on a path toward a post-pandemic normal, seeking to revive key tourist sectors in time for the summer season without triggering a second wave of infections.

The EU said it could reopen borders to travelers from outside the region in early July, after some countries within the bloc reopened to European visitors.

In France, a top expert meanwhile said dramatic drops in daily deaths and new cases since their March peaks meant the worst was over.

“We can reasonably say the virus is currently under control,” said Jean-Francois Delfraissy, the head of the government’s scientific advisory council.

But bleak numbers streamed in from Latin America, the latest epicenter.

Brazil’s death toll rose to more than 35,000, the third-highest in the world, after the United States and Britain.

Tolls are also rising sharply in Mexico, Peru and Ecuador.

And in Chile, deaths have risen by more than 50 % in the past week, despite a three-week lockdown of the capital, Santiago. – Rappler.com