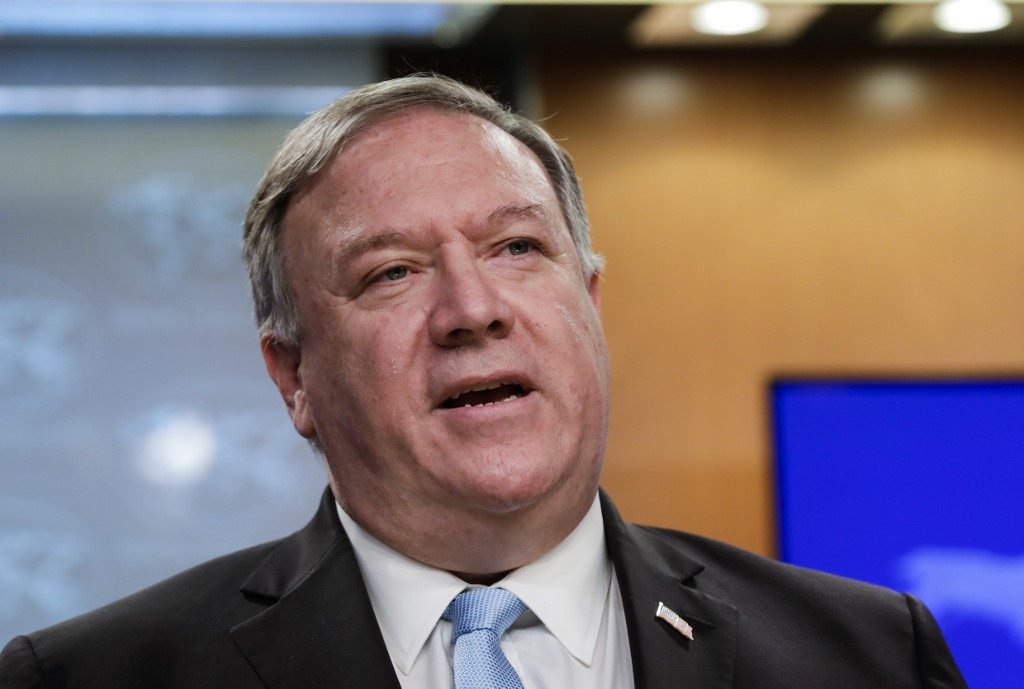 WASHINGTON, DC, USA – The United States on Wednesday, June 17, pressed China over its treatment of Uighur Muslims and Hong Kong as the two powers stood firm in high-level talks in Hawaii on soaring tensions.

They met away from media as excerpts came out from an explosive memoir by former US national security advisor John Bolton, who said that President Donald Trump asked President Xi Jinping for assistance in his re-election.

Just as Pompeo met Yang, Trump signed into law an act that authorizes sanctions for Chinese officials involved in the detention of some one million Uighur Muslims and other Turkic Muslims. (READ: Uighur researchers say China running more camps than known)

China will “resolutely hit back and the US will bear the burden of all subsequent consequences,” the Chinese foreign ministry said.

And Pompeo and his counterparts from the other Group of Seven major industrial democracies put out a joint statement voicing “grave concerns” about a draft security law in Hong Kong.

“We strongly urge the Government of China to reconsider this decision,” said the joint statement by Britain, Canada, France, Germany, Italy, Japan and the United States.

China is moving ahead with a law that would prohibit subversion and other perceived offenses in the financial hub, to which Beijing promised autonomy before taking back the British colony in 1997. (READ: China extraditions possible under new security law in Hong Kong – advisor)

With Trump under fire at home over his handling of the coronavirus pandemic, his Republican Party has increasingly cast China as the villain ahead of November elections.

But Bolton’s book – which his former administration is trying to block – tells another story, saying that Trump asked China to boost his election prospects by requesting that it buy more farm produce.

Bolton, according to an excerpt published by The Washington Post, also said that Xi explained the Uighur camps to Trump, who replied that they were “exactly the right thing to do.”

Activists say China is forcibly homogenizing minorities in a brainwashing campaign with few modern precedents. Beijing counters that it is running vocational educational centers that offer an alternative to Islamic extremism.

Yang reportedly sought the meeting with Pompeo, following a similar quiet encounter with him in New York in August to address tensions.

“Both sides agreed to continue maintaining contact and communication,” it said.

The United States was cooler in its assessment, saying that Pompeo told Yang that the two nations need “fully reciprocal dealings.”

Pompeo has been in the forefront of denouncing China, saying in recent remarks that it is “truly hostile” to the United States and “ruthlessly imposes communism.”

The conservative former congressman has taken the lead in promoting a theory, discounted by mainstream scientists, that the coronavirus came out of a Chinese laboratory.

Susan Thornton, a career diplomat who served as the top State Department official on East Asia earlier in the Trump administration, had voiced skepticism that the meeting would produce much.

“My own view is that the United States and China both face serious crises, as does the rest of the world from COVID-19 and the consequent economic meltdown,” said Thornton, now at Yale Law School.

“It seems to me that talking about US-China rivalry in this environment is out of touch with the reality that people are facing.”

Whether the United States and China reach any rhetorical truce could become clear quickly. Pompeo is set to speak Friday at a Danish forum, where the State Department says he will discuss “threats to democracy around the world.” – Rappler.com