Burundi’s new leader to ‘continue on the path’ of predecessor 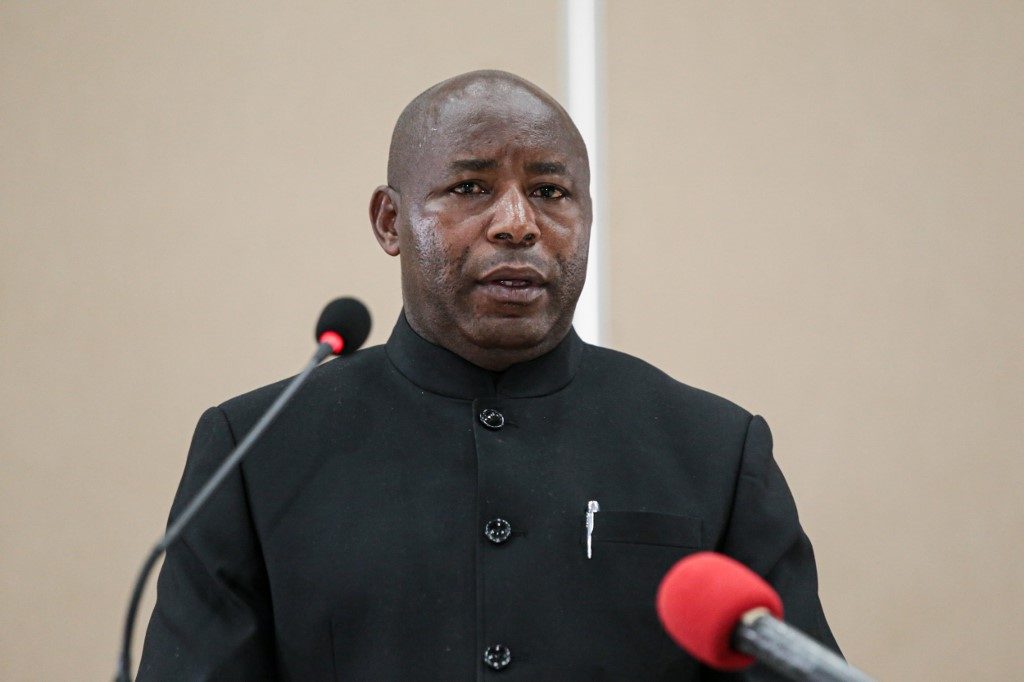 GITEGA, Burundi (UPDATED) – Burundi’s new president, Evariste Ndayishimiye, took office on Thursday, June 18, in a colorful ceremony where he vowed to “continue on the path” of his predecessor who died suddenly last week.

Elected last month in a disputed vote, Ndayishimiye was meant to take office in August, but his inauguration was brought forward after outgoing president Pierre Nkurunziza died from what authorities say was heart failure.

In his inaugural speech, the 52-year-old former army general showed little departure in tone from his predecessor, hailing Nkurunziza’s 15-year rule and accusing the international community of meddling.

In a lengthy tribute at a stadium in the capital Gitega, Ndayishimiye said Nkurunziza had “strengthened Burundi’s independence and sovereignty.”

His own role would be to “continue on the path” that had been laid out, Ndayishimiye said.

Burundi has been in turmoil since 2015, when Nkurunziza’s third-term presidential bid sparked violence that left at least 1,200 dead while some 400,000 fled the country.

Ndayishimiye lashed those he said had “betrayed” the country and described those who had left as “heartless.”

“Those who fled Burundi and went to complain to the colonizers, what did you gain?” he asked.

But, he said, “the doors of dialogue are open.”

“Those who have always used dialogue as a pretext to disturb the country – come back, we are ready to talk.”

He also criticized the international community, which has called for dialogue, saying “no-one has the right to demand we talk amongst ourselves.”

Observers have described Ndayishimiye as more tolerant and open than Nkurunziza.

However, he is also a staunch party faithful handpicked by a powerful group of generals and is not expected to veer off course.

Nkurunziza’s final years saw the country placed under sanctions and snubbed by western donors, with Burundi ranked by the World Bank as one of the world’s 3 poorest countries.

Nkurunziza withdrew his country from the International Criminal Court in 2017, and last year shut down a local UN rights office which was probing killings, enforced disappearances and other rights abuses.

Ndayishimiye’s speech, punctuated with energetic drumming from artists dressed in the red, white and green of the Burundi flag, came after he took the oath of office in front of the 7 judges of the consitutional court.

A 21-gun salute sounded before he inspected the guard and walked around a stadium packed with citizens dressed in identical patterned outfits.

While guests were made to wash their hands upon entering the stadium, only a few dignitaries wore masks in the upper tiers and no distance was maintained between attendees.

Along with members of the military, police and judiciary, diplomats and representatives of international organizations were present, but no international heads of state attended.

Shortly before taking the oath of office, Ndayishimiye knelt surrounded by Christian and Muslim leaders, who prayed for him.

“Understand that you are a son of God and as such must bring peace among Burundians, you know how much we need it,” said the Catholic archbishop of Gitega, Simon Ntamwana.

“Bring back to our country the refugees in the camps, bring back the intellectuals in exile so that they can take part in the development of our country, renew ties with the international community so they can help us develop,” he said.

‘A dark and sad legacy’

Nkurunziza, a devout evangelical who believed he was chosen by God to lead Burundi, leaves a “dark and sad legacy,” Carina Tertsakian of the Burundi Human Rights Initiative told Agence France-Presse (AFP).

UN rights investigators have said the period since 2015 has been marked by likely crimes against humanity committed by state forces, citing extrajudicial executions, arbitrary arrests, disappearances, torture and sexual violence.

Nkurunziza died on June 8 of “heart failure” in a hospital in the eastern city of Karuzi, according to the authorities.

But the 55-year-old took ill less than two weeks after his wife had been flown to a Nairobi hospital with COVID-19, according to a medical document seen by AFP, and speculation is rife he may have caught the virus.

A medical source told AFP he had suffered “respiratory distress” before dying.

Compared to neighbors which imposed lockdowns and curfews – with the exception of equally sceptical Tanzania – Burundi has taken few measures to combat coronavirus.

The government has yet to announce a date for Nkurunziza’s funeral. – Rappler.com