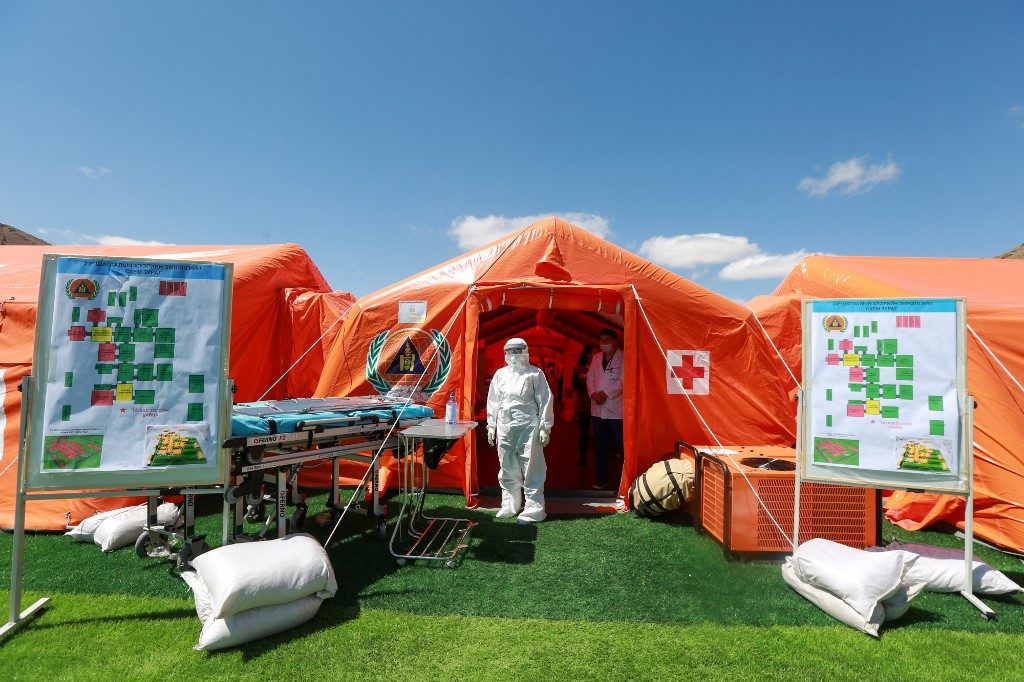 Facebook Twitter Copy URL
Copied
Mongolians will elect a new parliament on June 24, under the cloud of the coronavirus, with controversy over candidates flouting lockdown rules and thousands of people stranded overseas unable to vote

ULAANBAATAR, Mongolia – Mongolians will elect a new parliament on Wednesday, June 24, under the cloud of the coronavirus, with controversy over candidates flouting lockdown rules and thousands of people stranded overseas unable to vote.

Mongolia, a landlocked country of 3 million people wedged between China and Russia, has taken some of the world’s toughest and most enduring measures to contain the virus.

In March it became one of the first countries to close its borders, while schools and universities that were even more quickly shuttered will remain closed until September.

But 2,000 polling stations have been set up for Wednesday’s vote, which will elect the parliament though not the most powerful presidential post.

Fueling anger over seemingly different rules for politics and other aspects of life, the country’s two main parties have broken bans on gatherings of above 30 people by holding big campaign rallies.

They have also flouted bans on door-to-door campaigning and ignored other social distancing rules.

“People are much more worried about COVID-19 than unemployment or poverty,” said Bold Sambuu, a senior adviser at Zorig Foundation, a democracy advocacy group.

About 600 candidates are contesting the 76 seats in the single-chamber parliament.

The ruling Mongolian People’s Party (MPP) appears best placed to take advantage of the unprecedented circumstances, partly because the strict measures have kept a lid on infections.

There have only been about 200 reported cases in Mongolia – most imported from Russia – and no confirmed coronavirus fatalities.

Another of its strict measures has been forcing returnees to spend five weeks in quarantine, including three in a government-run facility.

But about 8,000 Mongolians have been stranded abroad by the virus.

With no provisions made for them to vote overseas, many are seething and some are demanding the elections be delayed.

The government had arranged limited charter flights to bring home some citizens from abroad.

But it did not undertake a large-scale repatriation, saying there was not enough room in the quarantine facilities.

Only pregnant women, seniors, minors and people with serious illnesses have been allowed to board the rare charter flights, and passengers are required to pay.

“We all cried when Prime Minister (Ukhnaa) Khurelsukh announced that he doesn’t know when Mongolia will re-open its borders,” said Dolgorsuren, a woman who was able to return to Mongolia in March and has become an advocate for other mothers of children still stranded abroad.

“No tourists will come during this summer. The government should use empty tour camps and other doctors to check our temperatures and blood pressure.”

Further infuriating those stuck overseas was the case of local rock band The Hu, whose members were able to get a chartered flight from Australia.

They secured the flight and returned home even though they did not fit any of the conditions, raising suspicion that the selection system is corrupt.

Adding to concerns about graft in the young democracy — Mongolia ended decades as a Soviet satellite in 1990 — the MPP paid off debts of 230,000 pensioners in February.

Another 200,000 pensioners who did not have loans were promised vouchers for one million tugrik ($355) if the MPP were re-elected — a move condemned by the IMF as a breach of its bailout agreement. – Rappler.com