Mongolians vote for parliament in shadow of coronavirus 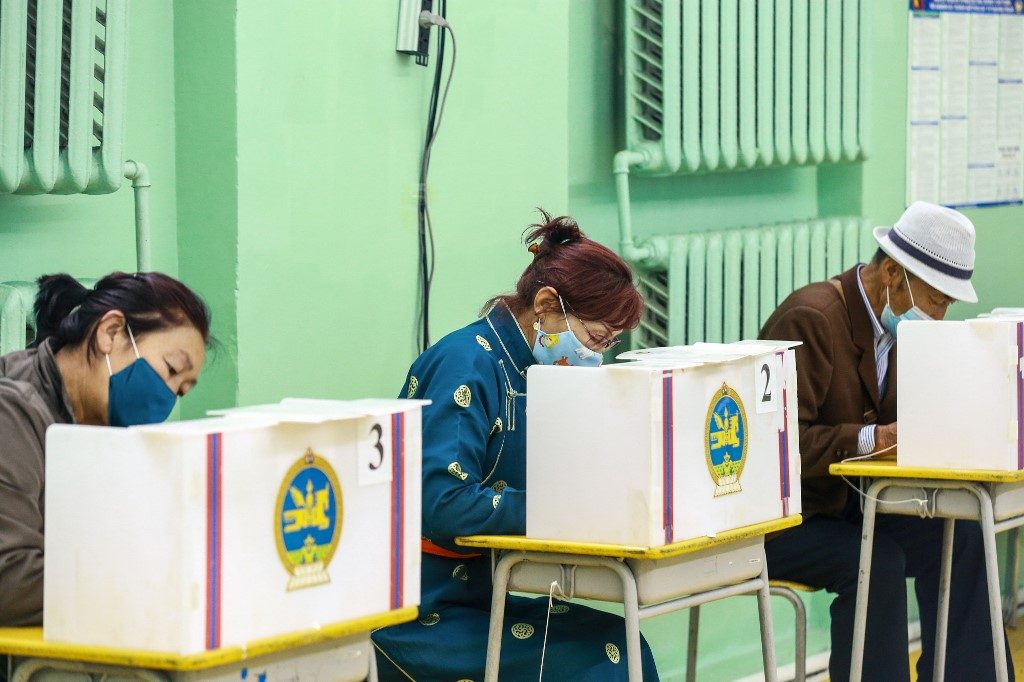 ULAANBAATAR, Mongolia – Mongolians voted in a parliamentary election on Wednesday, June 24, wearing gloves and masks as part of coronavirus safety measures in a mineral-rich landlocked country with an economy hurt badly by the epidemic.

Some had called for the election to be postponed in the nation of 3 million people as thousands of people have been stranded overseas since the government closed the borders to keep the virus at bay earlier this year.

But those able to vote were eager to cast their ballots in the capital and yurts in the countryside of the democratic country sandwiched between Russia and China.

The opposition Democratic Party has 7 seats while an independent lawmaker and the Mongolian People’s Revolutionary Party have one each.

Polls closed late Wednesday and results could be announced later in the night.

“I think its good to organize our election as planned even though there is a pandemic,” Amarzaya Enkhbayar, 35 year-old voter who runs her own private business.

“These elected decision-makers must improve our life. We have to do something for the development of our country,” she told Agence France-Presse after voting in Ulaanbaatar.

About 8,000 Mongolians are currently stranded abroad and protests inside the country calling for their return have been broken up by authorities on the grounds that they break social distancing rules.

There have only been about 200 reported coronavirus cases in Mongolia – most imported from Russia – and no confirmed fatalities.

“I thought the election should be delayed,” argued another voter, 39-year-old Enkhtsetseg Bandi.

“However, the state is spending billions to organize this election, so I must participate not to waste our budget.”

A number of corruption scandals have erupted in recent years and there is growing anxiety about graft in the young democracy, which ended decades as a Soviet satellite in 1990.

Despite its mineral wealth, the country’s economy has been weak and required a $5.5 billion bailout from the International Monetary Fund in 2017.

The pandemic has not helped, with cafes, restaurants and pubs ailing as the government imposed early closing times as part of coronavirus measures. Schools have been closed since January.

But Enkhzaya Sodnomtseren, a 32-year-old mother-of-two, said she wanted the elections so a fresh round of lawmakers could be brought to power.

“I truly believe we must hold the election, no matter what happens,” she said. “I was super happy and in a hurry to come here to vote because I want change.” – Rappler.com