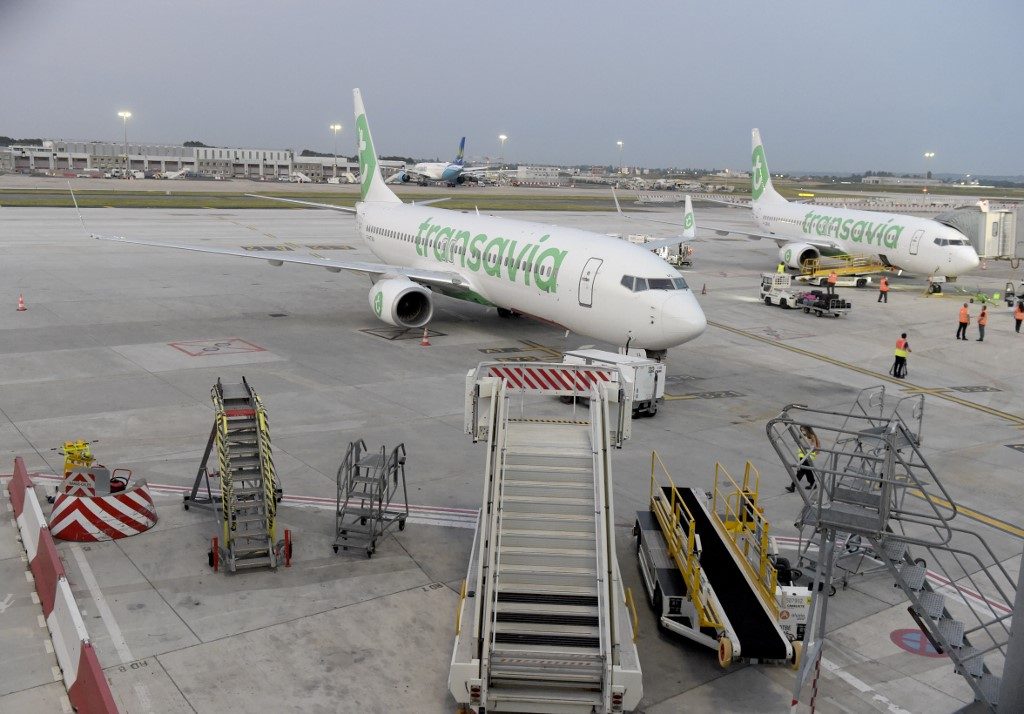 Facebook Twitter Copy URL
Copied
At least 15 climate activists, who slammed the French government's bailing out of the aviation industry, are arrested for 'forbidden entry' and 'damage'

ORLY, France – Paris’s Orly airport reopened on Friday, June 26, after 3 months closure during the coronavirus pandemic, but traffic was thin and also briefly disrupted by climate protesters storming the runway.

A plane operated by low-cost carrier Transavia took off for the Portuguese city of Porto, the first commercial flight since the number two Paris airport came to a halt on March 31.

Two firetrucks on either side of the plane shot arcs of water over the stationary aircraft in celebration, with the passengers inside waiting to taxi to the runway.

But hours later, Extinction Rebellion activists stormed the runway, lit flares, and attached themselves to bicycles with locks around their necks to protest the bailing out of the aviation industry, which suffered huge losses with the grounding of air traffic during the COVID-19 pandemic.

Fifteen people were arrested for “forbidden entry” and “damage,” said an airport official.

Before their arrest, the activists rolled out banners saying “let’s save the living not airplanes” and “15 billion to relaunch the catastrophe,” in reference to the French government’s 15-billion euro bailout for the aviation industry.

“The government is trying to do a publicity stunt by outlawing a couple of domestic flights, but at the same time it is financing the revival of the aviation industry with billions of public money. Where is the logic?” said Extinction Rebellion in a statement.

They will be on more than 70 flights compared to the normal run of 600 a day.

Traffic is due to increase to 200 flights daily in July but it will depend much on whether Algeria, Morocco and Tunisia reopen their borders as well as on whether the virus remains under control.

For nearly 3 months, all commercial flights from Paris have taken off from the main Charles de Gaulle airport, to the north of the capital.

In May, traffic plummeted by almost 98% at Charles de Gaulle, with only 200,000 passengers coursing through its halls, a snapshot of the damage done to global aviation.

The International Air Transport Association said earlier this month that the world’s airlines were one course for a combined net loss of more than $84 billion this year.

Orly has taken measures to check the spread of the coronavirus, with more than 7,000 posters and stickers to keep people at a safe distance, hand sanitizers, and plastic windows at check-in desks and other counters.

The group wants governments to adopt policies that cut harmful emissions to a net level of zero by 2025. – Rappler.com