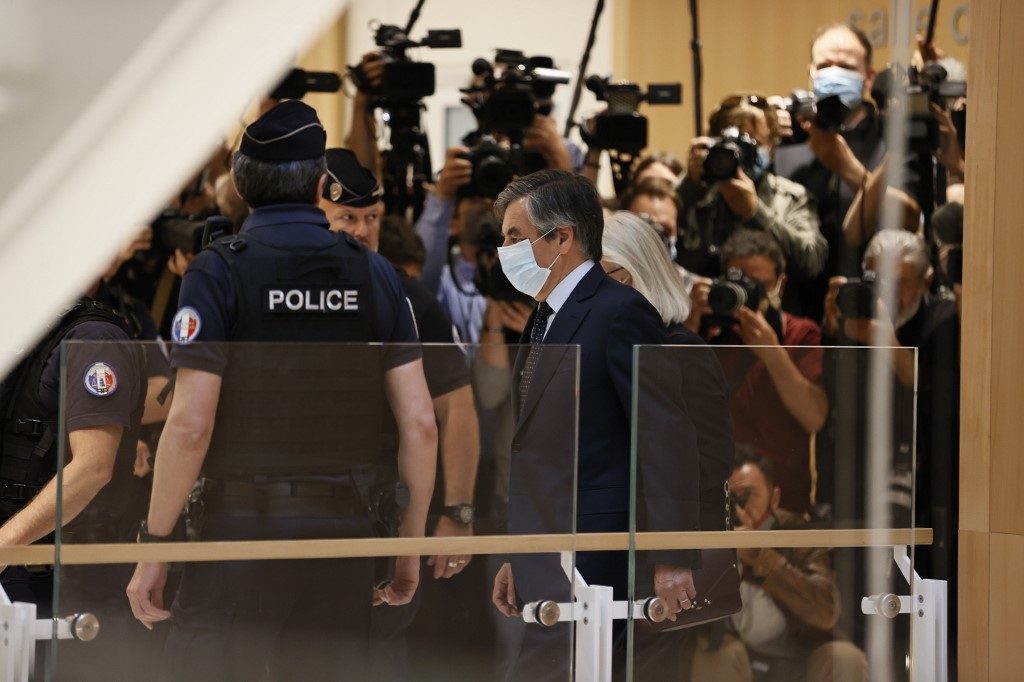 PARIS, France – A Paris court on Monday, June 29, sentenced former French prime minister Francois Fillon to 5 years in prison, with 3 suspended, after finding him guilty of orchestrating a fake job for his wife, a scandal that cost him his shot at the presidency in 2017.

Fillon’s wife Penelope was handed a suspended 3-year sentence for participating in a scheme that saw her paid over a million euros in public funds over a 15-year period.

Both were ordered to pay fines of 375,000 euros ($423,000) and also reimburse one million euros to the National Assembly, where Penelope supposedly worked as Fillon’s parliamentary assistant from 1998 to 2013.

With 3 years of the 5 years suspended, Fillon faces two years behind bars in jail. But the couple immediately appealed the ruling, meaning neither will be detained for now pending the appeal.

The couple made no statements as they left the courthouse.

The case was widely seen as a test of whether French politicians would be held to account after decades of getting off lightly on charges of nepotism or financial misconduct.

The allegations that Fillon had pilfered the public coffers for years pummelled his image as an upright fiscal hawk promising to right the country’s finances – and loomed large in the “yellow vest” anti-government protests that rocked the country in 2018-2019.

A newspaper report on the fake job surfaced early in January 2017, just after Fillon clinched the nomination from his rightwing Republicans party as candidate for a presidential race he was widely tipped to win.

It later emerged that Fillon had also used public money to pay two of his children a combined 117,000 euros for alleged sham work while he was a senator, before becoming premier in the government of then-president Nicolas Sarkozy.

He was also accused of getting the millionaire owner of a literary magazine to pay his wife 135,000 euros for “consulting work” that was largely fake.

A third defendant, Marc Joulaud – who stood in for Fillon in parliament when he was a cabinet minister, and who also hired Penelope Fillon as an assistant – was also found guilty.

He was also handed a 3-year suspended sentence.

Fillon’s lawyers had attempted to have the case reopened after the former head of the Financial Prosecutor’s Office (PNF), Eliane Houlette, told lawmakers this month that she had met with “pressure” to bring charges quickly against Fillon.

But the court rejected the request Monday, even though President Emmanuel Macron – whose path to the presidency was cleared by Fillon’s downfall – requested an investigation over the prosecutor’s claims.

“Penelopegate,” as the scandal became known, torpedoed the career of one of France’s right-wing stars, who was the youngest member of parliament when first elected at just 27 years old.

Fillon met his Welsh-born wife while she was studying at the Sorbonne in Paris, and the couple soon married and moved to an imposing country estate near Le Mans where they raised their 5 children.

Penelope Fillon told the court she spent a lot of time sorting her husband’s mail, attending public events near their rural manor, and gathering information for his speeches.

But investigators seized on a 2016 newspaper interview in which she said: “Until now, I have never got involved in my husband’s political life.”

Fillon insists he was set up for “political assassination” by his rivals and was also the victim of a biased judiciary. – Rappler.com