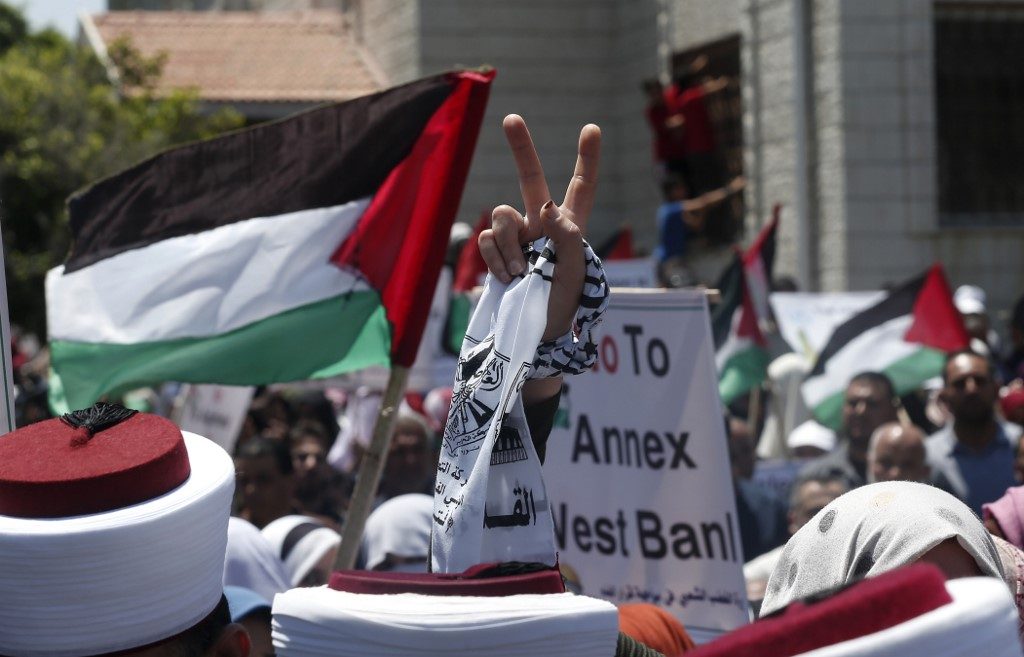 Netanyahu’s center-right coalition government had set July 1 as the date from which it could begin implementing US President Donald Trump’s Middle East peace proposal.

With no announcement currently scheduled on Israel’s self-imposed kick-off date, opponents of the plan – notably Palestinians in the West Bank and Gaza – were mobilizing.

Several thousand brandished Palestinian flags and placards condemning Trump at a rally in Gaza City, while demonstrations were building in the West Bank cities of Ramallah and Jericho.

Netanyahu has voiced enthusiastic support for the Trump plan – which has been roundly rejected by the Palestinians – but the right-wing premier has not revealed his intentions for enacting the US proposals.

Hamas, the Islamist group that controls Gaza, launched some 20 test rockets from the coastal Palestinian enclave into the Mediterranean Sea on Wednesday, a move aimed at dissuading Israel from moving forward, Hamas sources told AFP.

Hamas, which has fought 3 wars with Israel since 2008, says that Israeli annexations in the West Bank, which borders Jordan, would be a “declaration of war.”

The Ramallah-based Palestinians Authority has said it is willing to renew long-stalled talks with Israel – but not on terms outlined by Trump.

While the US has offered tacit support for immediate annexation, most of the international community is vocally opposed to the project.

Writing in Israel’s Yedioth Ahronoth newspaper on Wednesday, Britain’s Prime Minister Boris Johnson said that although he was a “passionate defender of Israel,” he viewed annexation as “contrary to Israel’s own long-term interests.”

“Annexation would represent a violation of international law,” he said.

In a rare criticism of Israel by Australia, the latter’s foreign ministry issued a statement Wednesday warning against “unilateral annexation or change in status of territory on the West Bank.”

France, Germany along with several other European states and the United Nations all oppose annexation, as do Gulf Arab states, with which Israel has increasingly sought warmer ties.

Jordan, one of only two Arab nations that has diplomatic ties with Israel, has warned that annexation could trigger a “massive conflict” and has not ruled out reviewing its 1994 peace treaty with the Jewish state.

Israel’s defense minister and alternate prime minister Benny Gantz has said annexation must wait until the coronavirus crisis has been contained, amid a sharp spike in new Israeli and Palestinian cases.

Gantz is due to take over as prime minister in November 2021 under the terms of a coalition deal.

Israel annexed east Jerusalem following the 1967 Six Day War and then the Golan Heights on the Syrian border in 1981, in moves never recognized by most of the international community.

While some settlers have urged Netanyahu to take similar action in the West Bank, other settlers oppose the Trump plan, as it envisions the creation of a Palestinian state across roughly 70% of the West Bank.

“Trump’s plan is to establish a Palestinian state in the land of Israel while leaving the Jews with little crumbs,” Daniela Weiss, a settler movement leader, told AFP.

Despite mounting headwinds against implementing the Trump plan, experts have stressed that Netanyahu may still move forward in the coming days, noting that he is keenly watching the US presidential election and may be eager to act if he fears the president will not win a second term.

Presumptive US Democratic party nominee Joe Biden is opposed to any unilateral annexations by Israel. – Rappler.com