Jul 2, 2020 12:12 AM PHT
Agence France-Presse
Facebook Twitter Copy URL
Copied
It is the UN Security Council's first statement on the pandemic and its first real action since the outbreak started 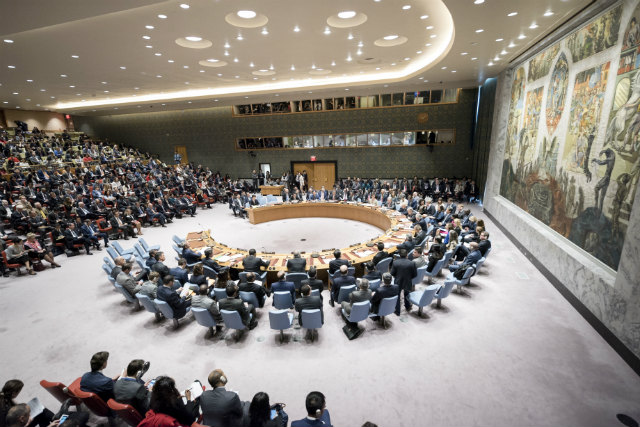 UNITED NATIONS – The UN Security Council on Wednesday, July 1, unanimously adopted a resolution calling for a halt to conflicts to facilitate the fight against the COVID-19 pandemic, after more than 3 months of painstaking negotiations, diplomats said.

The resolution, drafted by France and Tunisia, calls for “an immediate cessation of hostilities in all situations” on the Security Council’s agenda.

It is the Security Council’s first statement on the pandemic and its first real action since the outbreak started.

Tunisia’s ambassador to the UN, Kais Kabtani, hailed it as a “historic achievement” but experts questioned whether the text would have any impact and say the paralysis undermined the Council’s credibility.

Repeatedly blocked by China and the United States, which opposed a reference in the text to the World Health Organization (WHO), the resolution aims to support an appeal in March by UN Secretary General Antonio Guterres for a global ceasefire.

It “calls upon all parties to armed conflicts to engage immediately in a durable humanitarian pause for at least 90 consecutive days, in order to enable the safe, unhindered and sustained delivery of humanitarian assistance.”

The new text makes no reference to WHO, which the US has criticized for its management of the crisis. Washington opposed any mention of WHO back in May.

The body’s paralysis for more than 3 months has been widely criticized, including by some members who have described their “shame” over its inaction.

During the negotiations, the United States and China, the two largest financial contributors to the UN, had both threatened to veto resolutions.

According to diplomats, Indonesia, a non-permanent member of the Security Council, helped broker a compromise that saw a reference to a General Assembly commitment to supporting the World Health Organization added to the preamble.

The vague reference was deemed satisfactory to China, which wanted to emphasize the importance of WHO, and the US, which broke away from the UN body over its handling of the pandemic.

On Thursday, July 2, Guterres welcomed the fact that his ceasefire request was supported by nearly 180 countries and more than 20 armed groups, but he acknowledged that it had not been followed up with concrete action.

“It seems unlikely that the ceasefire call will actually have much impact in many war zones,” said Richard Gowan of the International Crisis Group think-tank.

“The Council missed the opportunity to boost the Secretary-General’s Global Ceasefire in April or May, when a resolution could have made a significant difference.

“This feels like a belated face-saving device following months of difficult diplomacy,” he added.

A second meeting on the pandemic is scheduled for Thursday. – Rappler.com