Mass burial for scores killed in Myanmar jade mine disaster 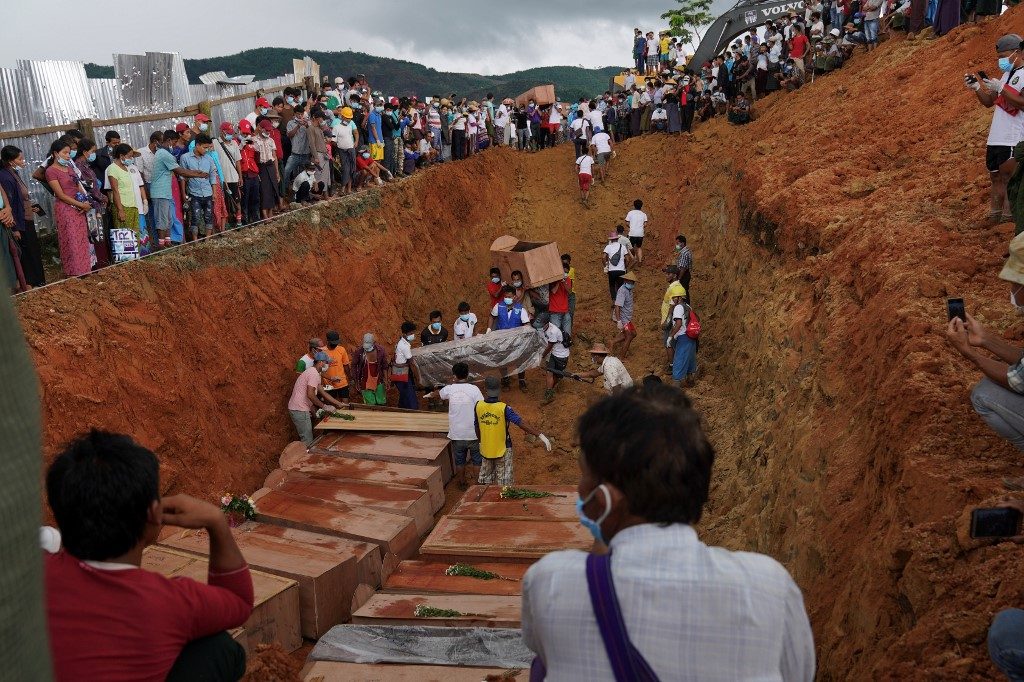 HPAKANT, Myanmar – Dozens of jade miners were buried on Friday, July 3, in a mass grave after a landslide in northern Myanmar killed over 170, most of them migrant workers seeking their fortune in treacherous open-cast mines near the China border.

Women wept by the open plywood caskets, some marked with just a name, a few with a solitary photo, before the bodies were carried into a huge grave gouged from the red earth by a mechanical digger near the scene of the landslide.

It was the worst accident in memory to befall Myanmar’s notoriously dangerous jade mines.

The tragedy occurred on Thursday when a hillside collapsed in heavy monsoon rains, sending a deluge of smothering mud over the workers who were scouring the land for fragments of jade.

“The search and rescue missions continued today… 172 bodies were found by midday,” the Myanmar Fire Services Department said in a Facebook post, raising the overnight toll by 10.

They join scores killed each year in Hpakant, an area is close to the Chinese border in Kachin state, where billions of dollars of the precious stone is believed to be scoured each year from bare hillsides by poor migrant workers seeking to strike it rich.

As photos of the dead circulated on social media Facebook users began to identify workers hundreds of miles from home, leaving moving tributes to friends and family members.

“Please bring my father back,” said Hnin Wati. “A daughter’s heart is breaking.”

Another, from a former miner, affectionately remembered one of the dead for his “kind-heart” and generosity with his food during tough shared times on the mountainside.

The bloodied bodies – stripped by the force of the sea of mud which entombed them – were yet to be identified.

Myanmar is one of the world’s biggest sources of jadeite and the industry is supercharged by demand for the green gem from neighbouring China.

Some jade brokers suspended online auctions on Thursday, and promised to donate money to their friends who were killed.

Scores of miners die every year in landslides and other accidents on unstable, over-excavated mountainsides.

They are often from impoverished ethnic minority communities, looking for scraps left behind by big firms.

Low-quality stones can be exchanged for food or sold for $20 to waiting brokers.

“Many of them (the dead) are Rakhine,” Phon Graing, a Hpakant township official told AFP, referring to the ethnic group who live hundreds of kilometres away at the other end of the country, and who are among Myanmar’s poorest communities.

“But we don’t have specific numbers yet.”

Police say victims had apparently defied a warning not to work the mines during the monsoon, which loosens the bare hillsides.

United Nations Secretary-General Antonio Guterres said he was “deeply saddened” by the deaths, as environmental groups called for an end to an illegal trade dynamised by Chinese demand.

Ownership and operations of the mines are mired in secrecy, although environmental watchdog Global Witness alleges operators are linked to former junta figures, the military elite and their cronies.

It said the landslide should serve as a “wake-up call” for Myanmar’s government led by Aung San Suu Kyi – whose party vowed to reform and stamp out corruption.

The watchdog estimated that the industry was worth some $31 billion in 2014, although very little reaches state coffers.

The fight to control the mines and the revenues frequently traps local civilians in the middle, with a rampant drug and arms trade further curdling the conflict. – Rappler.com